A Life Well-Loved: The Takeaway 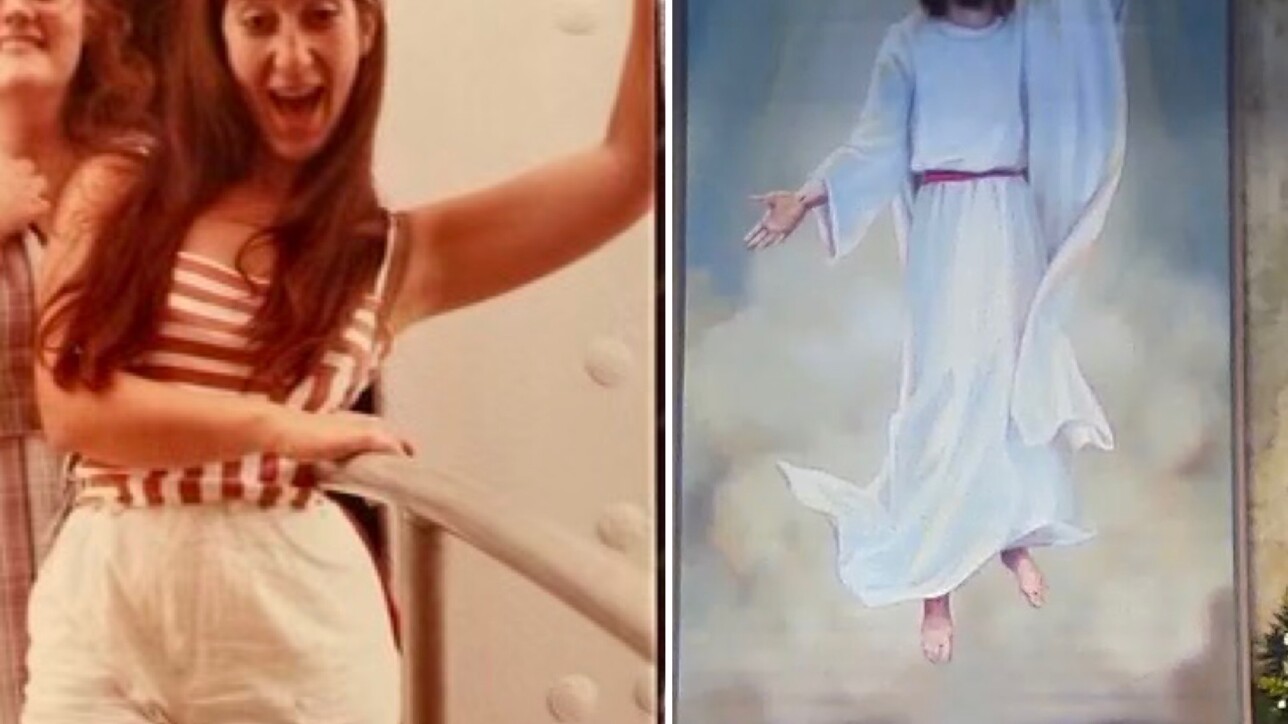 “I see Patty in Jesus’s face,” Madge, our faithful Jew, whispered across the pew to Rachel, Debbie and me.

We shoulder-shook-giggled as we’ve done so many times over the course of our 50-year friendship.

By no stretch of the imagination did I see Patty’s face in the floor-to-ceiling Jesus that was prominently displayed beyond the priest in the pulpit. But I immediately recognized a somewhat familiar pose.

Patty, the fifth member of our friend group, was perhaps the most dynamic, artistic, wittiest and wildest. Though to be fair, those very descriptors will likely be used interchangeably in all of our hopefully far-in-the-future eulogies.

Along with her brothers, Patty had long ago defected to Florida – their mother, Jean, joining them for the last few years of her life. As they were born and bred Philadelphia folk, it made sense to bring them back home for a joint memorial service and burial, especially since they died just seven weeks apart.

It took over a year-and-a-half, mainly due to this travel-deterrent, social pariah of a thing called COVID-19, but finally, far-flung friends and family had converged in Pennsylvania – trunk-loads of stories in tow.

As Jesus waved in the foreground, the requiem mass continued with Patty’s beloved nephews, aka Jean’s grandsons, proudly proclaiming meaningful Bible verses about eternal life (all you have to do is believe) and forgiven sins (audible sigh of relief). The sweet sounds of Ave Maria and the can’t-hear-it-without-the-ol-throat-constricting Amazing Grace filled the sanctuary and we floated out On Eagle’s Wings.

In those awkward post-service moments with pockets of people nudging one another with, “Isn’t that the double cousin?” or “They must be the high school friends” or “Those are Bill’s kids over there,” it began to rain.

“Tears for Patty,” Rachel said, looking to the sky.

No sooner were the words out of her mouth that the rain, and the tears, were gone for the day.

It was all a bit surreal, piling into Debbie’s car as if we were our 16-year-old selves. But today no one was stuck in the middle of the backseat; instead there was a magnetic FUNERAL flag teetering on the roof. We couldn’t help but reminisce about the thousands of miles we had spent in cars together –singing Fifty Nifty United States on the cross-country drive to Rachel’s college, peeing on the shoulder of Route 81 en route to Canada or heading to Jimmy’s Hatboro house for a Super Bowl party. We drove to the Spectrum to see Jethro Tull, The Allman Brothers, Traffic, Lynyrd Skynyrd, The Eagles, Jackson Browne and everyone in between. We took the Schuylkill Expressway to cheer for Manny Trillo and Mike Schmidt and Steve Carlton, making it back to The Fly in time for last call. We barreled down the Black Horse Pike to Somers Point for 7-for-a-dollar beers at The Anchorage and to Cape May or Strathmere for weekend-long parties. Belting out Beatles’ tunes, we rode from arboretum to arboretum in search of the best buds. We looped from Flourtown to Wyndmoor. From Laverock to North Hills. From Oreland to Kensington. From South Street to Plymouth Meeting Mall.  We pooled our pennies to fill the tanks during the Energy Crisis, hoping our parents weren’t monitoring the odometer as well as the gas gauge. We rode with the windows rolled down in summer because there was no air conditioning and in the winter to keep the cigarette smoke from permanently permeating the family cars.

I distinctly remember sitting in Patty’s khaki-colored Corvair, lost on the side of some road somewhere – probably on the way to one of Bobby Katz’s parties — when Rachel had one of her many Eureka moments.

“I know!” she exclaimed. “We should invent a gadget that tells us where we are and how to get where we’re going.”

We had no idea where we were all heading but we talked about it. All.The.Time. We talked about who we were. Why we were. Who we were supposed to be. What we’d become. Where we’d Iive and with whom. Which guys were worthy of our pursuit. And vice versa. We shared our biggest fears. Our strongest convictions. Our weakest moments. Our darkest secrets, our most cringe-worthy moments, laughing through the tears as we over-analyzed our actions.

We may have looked like your typical party girls on the outside, but truth be told, we were deep. Oh, so deep.

So, there we were, the grown-ups we never truly believed we’d ever become. A Jew, a Quaker, a Heathen and a Presbyterian. Three liberals and a Trumper. A nurse, a data analyst, a writer and a state worker. All of us in committed relationships and mothers of kids who never in their millennial dreams would believe the life we had led. So mostly, we just didn’t tell them.

“I liked the bit about how we shouldn’t focus on what we think we need,” Debbie said as we pulled out of the church parking lot, kicking off our discussion of Father Larry’s homily. “But that we should be content and happy and thankful for what already have.”

“I totally missed that,” I replied. “All I heard was that we are all broken in our own ways.”

“How about the phone?” Madge chimed in. “He held up his cell phone and said that when we get a call, even though a name pops up, we have to have faith that it’s really THAT person on the other end.”

“What I heard, and you know I’m half deaf,” Rachel added. “Is that we have to believe that Patty and Jean are still with us. But of course, we already knew that.”

“There was something about the finality of goodbye and how the Irish always say farewell rather than goodbye — is that true, Betsy?”

“Well either way, we better never say goodbye to each other ever again.”

We fell silent for a minute on that one.

“But the phone thing,” Madge continued. “It was about keeping the connection. And how we have to keep talking to the dearly departed even if we can’t see them.”

“Right. Not to treat them like a memory, but as if they’re still here.”

We wound our way through our old stomping grounds, landing at the cemetery across the street from the long-gone Korvette’s where one of us had started her short-lived, coming-of-age shoplifting career.

We stood at the gravesite and recited the Lord’s Prayer, some of us forgiving trespasses, others forgiving debts, then each placed a flower by the marble urns that held their ashes. We swallowed hard one last time and headed to the part of the day that Patty would have loved the best. While a true believer in God and most of his wonders, she would have cherished the church service. But she also recognized the power of a good party.

Having been in Patty’s life for half-a-century, we knew her people. We loved her family. And we embraced her friends. Everyone who had gathered for her life celebration was there with a different perspective. Her oldest friend from grammar school days, her bestie from art school, her step family who stepped so far beyond the moniker, her brothers’ friends who became her own, her nephews and cousins and sisters-in-law, both past and present. We all had our memories, our own whys and what ifs and together we resurrected Patty in all her gorgeous glory.

The last time I saw my friend was on our annual cruise, back in 2020 when this crazy coronovirus was first rearing its ugly head. And while neither Patty or her mother ever got COVID, I can’t help but think about the part it played in our final days together.

Patty tended to focus on the catastrophic; the what-if-the-hurricane-hits scenarios, where I obsess over the fear of forgetting a favorite pair of shoes. Despite having every possible anxiety covered, we traveled well together.

My ever-loving spouse begged, and I mean begged, me not to go on what ended up being the last cruse out before the no sail order took effect. I left for Florida anyway, assuming Patty would never in a million years board that boat and that we’d end up driving to Key West instead. But when we called Patty’s mother the night before departure, agreeing that we’d heed her sage advice, Jean didn’t hesitate for a second. Go. Absolutely go on that cruise. You only live once.

And so we did.

In a complete reversal of roles, mine was the heart palpitating with each and every horror story we heard while at sea. Patty would simply ply me with chocolate then lead me to the Lido deck for umbrella drinks where, inevitably we’d meet another new friend and forget all about the COVID cooking around us.

I can’t help but wonder if somehow she knew this cruise would be our swan song.

By the time we finally were able to celebrate Patty’s life, COVID had become background noise. Though I have always respected its virility, having lost more than a few friends and acquaintances to the virus, I no longer feared it. I had spent over two years quaking as I followed the rules but was now both boosted and bored.  Even though there was a recent uptick of one of its pesky variants, COVID didn’t even cross my mind when it came to Patty’s final send off.

Some of us got hit harder than others, but we all made it through. Apart but together, as we’d been for much of our adult lives. Over the next two weeks our COVID connection precipitated no less than 7711 texts in which we scrutinized every how, when, where and what if scenario. We kept each other laughing as we struggled to unearth the deep mystical message enveloping Patty and COVID and the life that we all shared.

As the texts and symptoms started to wane, the takeaway came to me in an uh-duh moment. We’ve screamed it from car windows and scribbled it in birthday cards. It’s been our mantra and motivator and our lifeline since the day we met. It’s always been there, through good times and tough times, breakups and breakdowns, feats and defeats, sicknesses and health, births and deaths.

It’s such a simple takeaway from a life well-lived. And it makes such perfect, beautiful sense.

I’ll get by with a little help