A Wedding for the Ages 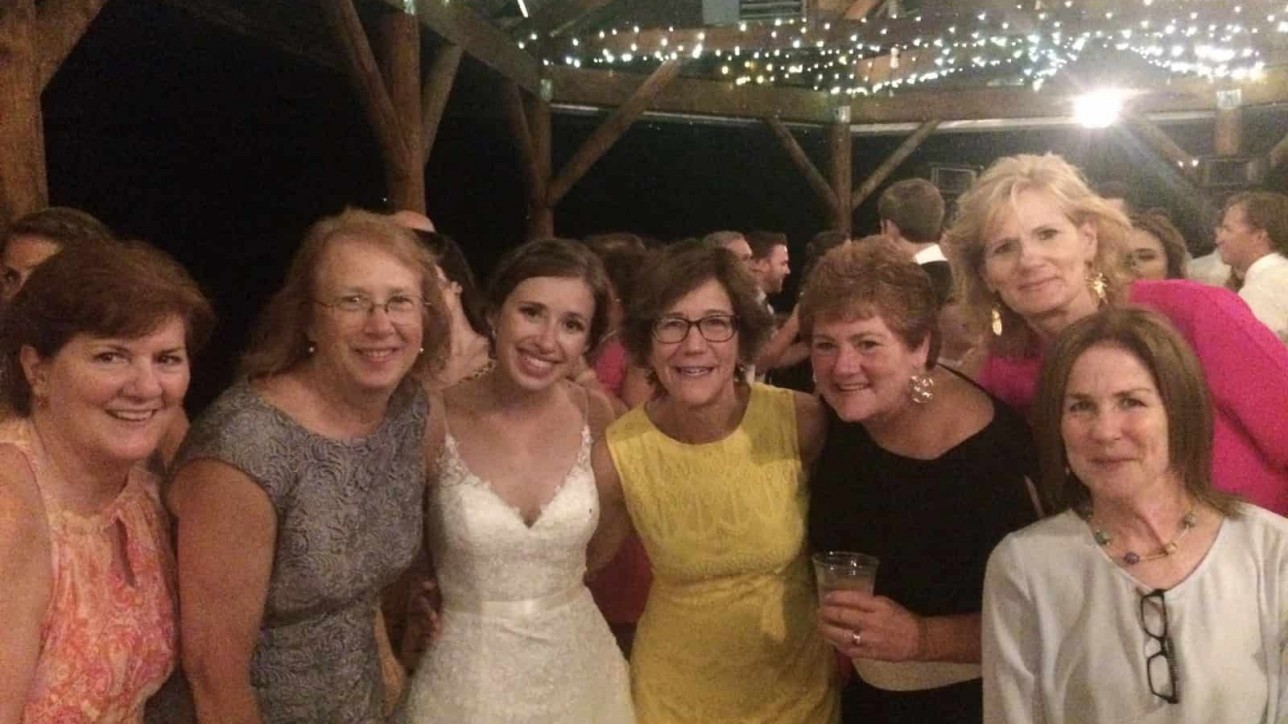 “You know I couldn’t get married without you,” Margaret said. And, of course, she didn’t. I was right there by her side with Carrie, Debbie and Susan as one of her bridesmaids when she said her I do’s to Tom. Margaret and I had been making mischief together since we were five years old and the thought of not standing up for one other on the most important day of her life was simply not an option.

I threw an engagement party brunch for Margaret and Tom at my mother’s house. We served homemade chicken divan and no alcohol because though we were old enough to drink, we were young enough to overdrink and I didn’t want my parents to see the seedy side of ourselves, especially on a Sunday.

Margaret’s bridal shower was an equally low key affair at her mother’s house with crudité and onion dip. The bride-to-be sat in a wingback chair and felt true joy when she opened the $80 wooden hamper that the four bridesmaids, Carrie, Debbie, Susan and I, all chipped in to buy. A gift worth giving, as it’s the same one that airs her dirty laundry to this day.

The wedding took place in an episcopal church with old-fashioned vows. The guys in the wedding party wore black tuxedos. We girls wore fairly flattering peachy-colored dresses and carried orange tiger lilies. Carrie and I couldn’t look at each other during the service knowing we’d burst into uncontrollable fits of nervous laughter when the minister “required and charged” the bride and groom in the presence of God, to reveal any reason they should not be united in marriage. Instead, we bit down hard on our lips and focused our gazes at opposing groomsman and blinked back tears. I worried way too much about smearing my self-applied Maybelline mascara to let my emotions win. But, Carrie welled and expelled, soiling the front of her gown with snot-filled tears.

The reception was at a private country club with a cover band that covered the appropriate mix of old fogey and top 40 dance tunes. By the time Margaret and Tom danced to Billy Joel’s You’re my Home, we were tipsy enough to scream out, “Home could be the Pennsylvania Turnpike” as if those were the most meaningful of the lyrics. And then, when Margaret’s fun-filled father swept her onto the dance floor, we bellowed, “Don’t you ever ask them why, if they told you, you would cry. So just look at them and sigh, and know they love you,” remembering with thankful hearts what Laird had found in the back seat of the red station wagon and chose to never expose.

Margaret and Tom grew up and prospered. They bought an old farm house in Lancaster County (accessible from the Pennsylvania Turnpike) and wallowed in wedded bliss, welcoming a bouncing baby boy, who they named Matt, shortly before their fifth wedding anniversary. Fifteen months later, they were doubly doused with twin daughters, Jan and Claire.

The children grew up and prospered. Matt became engaged to the lovely Lexie whose sole fault is that she grew up in the Bay Area. They met at the University of Richmond and after graduating, their cross-country romance grew roots in San Francisco, turning Matt into a Cali-convert. In Matt and Lexie’s pre-wedding whirlwind, Claire and Phil got engaged and snagged a date five weeks before her brother’s nuptials in San Francisco.

Which is where I found myself last weekend. Thirty-four years after the wedding of Margaret and Tom.

Claire is a mini-Margaret. Their high school graduation photos are interchangeable and both bolster bold personalities with kind hearts and sharp wits. Claire was a stunning bride with a radiant smile, a perfect dress and beautiful steel-blue-gowned bridesmaids. None of us could look at Jan, the weeping maid of honor, for fear that our self-applied Lancome mascara would streak our weathered cheeks.

The wedding came at the end of a heat wave, broken only by an afternoon rain storm. The ceremony was held in an idyllic setting under the trees at the river’s edge at 5 pm, with the day’s first rays of sun illuminating the bride and groom. As I sat with my spouse, who was not even yet my date at Margaret and Tom’s wedding, I took inventory of the guests, thinking about how many I had celebrated with a generation ago at Old York Road Country Club.

Tom is one of six, and they of course were all there, their offspring eerily resembling the parents I clinked glasses with three decades earlier. Two of my sisters were there along with my honorary sister, Mary Anne, Nancy and Johnny who we’ve known for a lifetime, many of Margaret and Tom’s college friends who I met over many a keg, Aunt Lucie and Susan who I’ve known and loved almost as long as Margaret has, Margaret’s brother and warm and wonderful wife, Monica, Margaret’s sister and former bridesmaid, Susan, Marilyn and her spouse, John, who we entertained with stories of who we had colluded with in our youth, and of course, Carrie, our generation’s emotional bridesmaid.

The wedding was perfect. Flowers were tied with shards of Margaret’s wedding dress. The guests were transported by shuttle buses. And the touches that Claire seamlessly, though painstakingly, wove through the decor, painted a perfect picture of the creative and artistic person she is.

The newlyweds danced to Coming Home. Claire and her father swayed to What a Wonderful World. Everyone danced to Bruce.

While the wedding was filled to capacity with joy, with love and happiness pouring out of every pore in the place, I have to admit, I felt a touch of melancholy. The guest list skewed strongly to the 30-and-under crowd so we didn’t know much of the music. We didn’t drink much of the wine. And we didn’t dance until dawn.

But, after all was said and done, and my sister Emily and I sat with Nancy and Johnny in the hotel bar sipping a night cap while my spouse snored away upstairs, I did some reassessing. Fifty-five years into our friendship, I let myself realize the magical magnificence of no longer being twenty-seven years.

We’ve done it all. We’ve seen it all. And best of all, we’ve lived to tell the tale. We’ve found our careers. We’ve raised our children. We’ve danced at weddings. We’ve cried at funerals. We’ve wished for tough times to pass. And they always have.

Claire and Phil are just beginning. They’ve got a lifetime ahead of them which will be filled with laughter and lunacy. Problems and promises. Dreams and dramas. But they’ll get through it, just as we have. 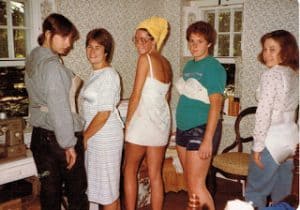