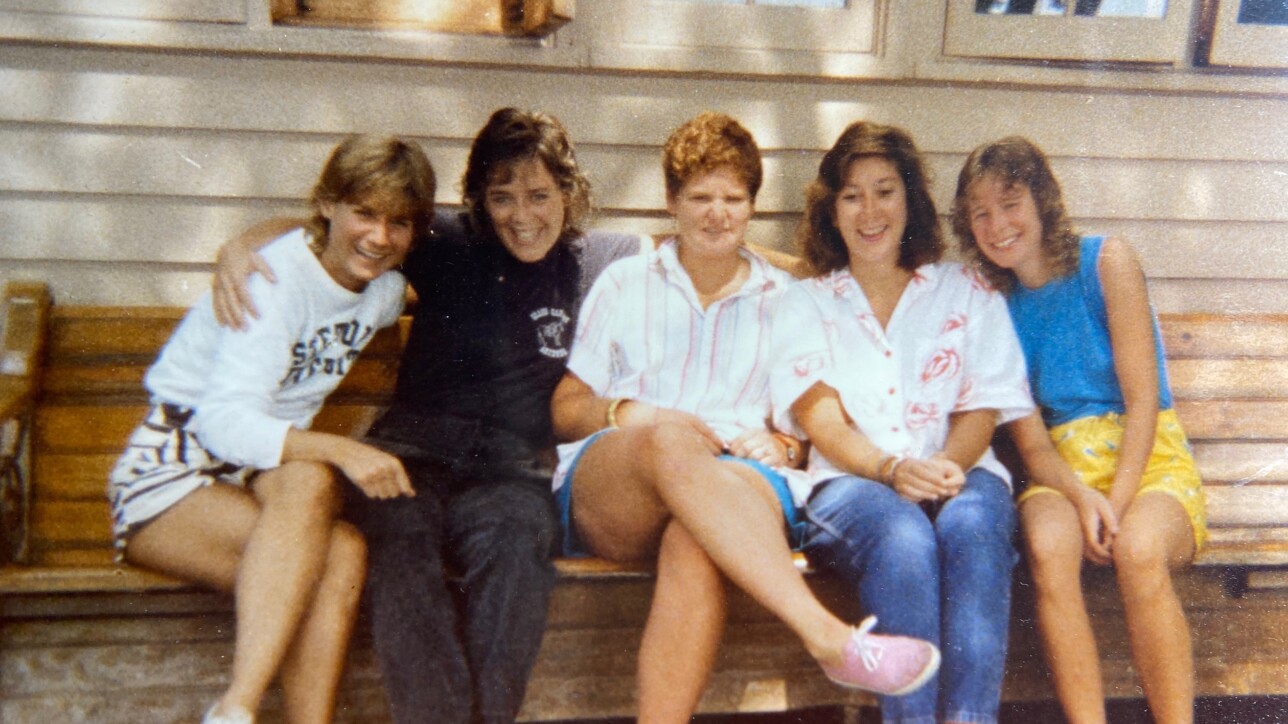 My friend Claire has rightly accused me of being a cold-hearted Episcopalian, even though I’ve been a Presbyterian for over 30 years now. She doesn’t say this with any ill intent because she would never say anything with ill intent. But facts are facts. I am stoic and tough and would rather pee my pants in public than be seen shedding a tear. At least the former could be crafted into a good story.

But, this has not been a good week for my stiff upper lip.

I lost my buddy, Patty.

I’ve powered through death before. It’s never been fun, but with all due respect to the dead, it’s been doable.

I’m not sure this one is.

“This one is tough,” I said to my friend, Ann, who has had way, way more experience with hard deaths than I ever will. I was just trying to flesh out the guilt I now harbored for not mourning others more.

“It’s different,” Ann said, in her infinite wisdom. “Patty was a soul mate.”

Patty and I had unspeakable fun on a couple of cruises in our 20’s. It took us another 25 years before our lives were aligned enough to allow a repeat performance. Once we did, we did it every year. Patty and I were perfect travel partners on the kind of vacation that serial over-indulgers look forward to 51 weeks a year. We went on a dozen cruises together and have dozens and dozens of fun stories, most of which are received with blank, “Guess you had to be there” stares.

This year’s cruise sailed on March 8th. If you think back to what was going on then, you might feel a little empathetic angst for us. I’m a fretter, but my anxieties revolve around things like securing an extra cup of ice, or the fear of forgetting a favorite pair of shoes. Patty worried about the catastrophic, like hurricanes, and school shootings and ….Covid.

My spouse begged me, literally begged me, not to go on this cruise. He’s a journalist who knows things. At the time, the only Covid cases were on cruise ships. But, for once, the tables were turned. I was the one who was scared. Patty wasn’t the least bit concerned. It was one of our best cruises ever.

We didn’t die. And no one got Covid.

But, it was the last cruise. The ships haven’t sailed since.

I’m a big believer in signs and omens and twisting reality to fit my fate. I can’t help but wonder if Patty insisted we go because somehow, some way, she knew that this was would be our last cruise.

I had the good fortune of spending a week a year with Patty, so many of my most vivid, top-of-mind memories include fun on cruise ships.

One year, two porters, seeing the 20 dollar bill dangling from Patty’s fingers, got into a fist fight over who would take our bags. A literal fist fight.

On another cruise, our one and only time at a craps table brought us inexplicable luck, drawing a huge crowd.

“I think that’s Bruce Springsteen’s wife,” someone whispered. Patty, who shared the same name, and after six drinks, perhaps a slight resemblance to the Boss’s wife, ran with it. We had half the casino fully convinced that Mrs. Springsteen and her friend, Betsy, were vacationing incognito, asking them please, please not to blow our cover. For the rest of the week we’d hear “that’s her,” whispers as we passed by.

Another time, Patty announced we had to start ticking things off our Bucket Lists. Little did I know how close we were getting. She somehow convinced me to go zip-lining in Jamaica, something that would have made my Bucket List maybe half a slot above sky-diving. She later admitted a tinge of fear when the adolescent zip-line operator kicked the milk carton out from under my quaking body, way before I was ready, laughing hysterically as I flew down a flimsy wire through a thick, far-below jungle.

We laughed at horrendous karaoke, got lost on a bike ride in the Cayman Islands, convinced our room stewards to bring us chocolate covered strawberries every afternoon at 4, placed our towel animals in compromising positions, “stole” copious amounts of shampoo and dinnerware, got involved with a family of shysters, and made hundreds of friends over the years. After all, who wouldn’t want to hang out with the two old ladies who acted like teenagers?

In the past month when it became clear that we might lose Patty, I spent a lot of time with the high school girls, texting, talking, and Zooming. Despite our overwhelming sadness, it was cathartic sharing memories.

We talked about how it all began. Three beguiling girls, soon to be known as Patty, Anna, and Donna, dressed in rolled up to high thigh uniform skirts, appeared without warning in the waiting-for-the-bus line at Enfield Jr High.

I have a long history of sizing up potential soul sisters by sight and bee-lining to befriend them. I went in for the kill, but so did half the school. There was nothing more intriguing than new blood in the hallowed halls of adolescence. Especially if they were cigarette-sneaking, make-up wearing Catholic school girls, bussed in for gym, music and art classes just a couple times a week.

They were instantly the “it” girls.

By the time we got to high school, and they had become full-time public schoolers, I had weaseled my way into Patty’s heart, bringing along Rachel, Madge, and Debbie. Our girl gang intersected somewhat with the Anna, Donna, and Patty contingent, swapping boyfriends and Budweisers, but we became our own entity, vowing eternal friendship.

Patty was the only one of us who had older brothers around and that opened up a new world for us. We watched Super Bowls at Jimmy’s house, and stormed Steve’s apartment under the guise of studying at the library. We basked in the beauty of being young and illegal.

Once we came of age, or at least close, her brothers introduced us to a neighborhood bar, dubiously dubbed The Fly, where “everybody knows your name.” Steve and Jimmy made sure we were treated like royalty and protected from harm. Keeping in mind that harm has a rather diverse definition.

We reminisced about summers in Canada at Rachel’s Charleston Lake house, and how Patty always, always baked bread from scratch. We recalled listening to the Beatles over and over and over in the Beech Lane bedroom, driving around and around and around in our parents’ cars, and spending October weekends at the Kaller’s shore house. We argued about who dated Const first, Debbie or Patty, and laughed at the irony of me being the one who ended up his prom date. We remembered one day at Morris Arboretum, pinky swearing that no matter where we lived, we’d all meet up in the Bermuda Triangle the year we turned 40.

Forty had different plans for us. Rachel was in California with a son and husband she had met in college. Debbie was dealing with a teenager. Madge was juggling a law career and motherhood and Patty was on the road to becoming a school principal in South Florida, future ex-husband and an English Bulldog named Binks by her side. I was in the throes of parenting three small children, and though I was likely the most tempted, couldn’t chance having it all disappear in the Bermuda Triangle.

The five of us saw each other only sporadically during those tumultuous decades, but we always kept in touch, often receiving hand-drawn cartoons from Patty, detailing her life in little, witty squares. After her future ex-husband officially became the ex, and our kids became sufficiently self-sufficient, Madge, Patty, Rachel and I welcomed our 50s in Las Vegas. I brought my high school diary and we roared over excerpts never to be released to the public, unless of course, the daughter publishes them upon my demise.

That friendship revival brought a vow to see each other more regularly and was the impetuous for Patty and my yearly cruises. We brought Madge one time, but she had the same turned-up lip response my spouse had after his maiden voyage, “A cruise really isn’t my thing, you and Patty go, and have fun.”

And we did. We always, always did.

Patty was funny. Patty was smart. Patty was a true artist. Everything she did or said had a wacky, creative twist to it. Patty loved adventure. She loved animals, including squawking parrots, rescue dogs, and feral cats she fed on her porch. She loved her friends. She worshipped her brothers. She adored their wives. Patty was an esteemed educator, a consummate volunteer, and an avid reader.

On paper, Patty was a pretty perfect person.

There’s always a but.

In recent years she had been suffering bouts of depression, anxiety, and an eating disorder which she powered through by self-medicating. As her brother, Steve, so eloquently and honestly, said in her eulogy, Patty was a strong and independent person, perhaps too proud, or too ashamed to seek or accept help.

Once the downward spiral began, I felt myself heading down the rabbit hole of guilt. I was one of Patty’s closest friends. Shouldn’t I have been more aware? Couldn’t I have done more? Patty and I talked about everything. Everything. Except, apparently, the demons that were destroying her life. That, she kept that to herself.

Until the very end.

We talked as long as she could when she was in the hospital. Some days she even sounded like the old Patty. She skirted her diagnosis and her prognosis, but the last text she sent me read:

“We’re not going to be able to do the unlimited drink package next cruise.”

I smiled through my tears. In her witty way, she had finally fessed up to what she had tried so long and hard to hide.

I climbed out of the rabbit hole and back into my memories. There’s no guilt. There’s no shame. There’s just Patty.

Patty, who in my dreams, is dressed in a flowy, white caftan and a bold, jeweled necklace. She’s draped over the balcony of a big cruise ship, pointing out flying fish and tossing breadcrumbs to swooping seagulls. She shrieks in delight as she spots me on the pier, flailing my arms and blowing her kisses as the sun sets over St. Thomas. The fog horn sounds its three short blasts and the ship slowly pulls out of port, sailing away to a place where my dear friend, my soul mate, can finally find the peace that surpasses all understanding. 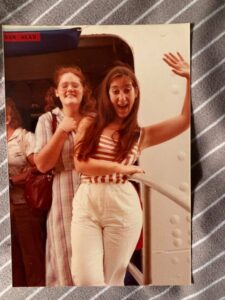