Another Little Piece of My Heart 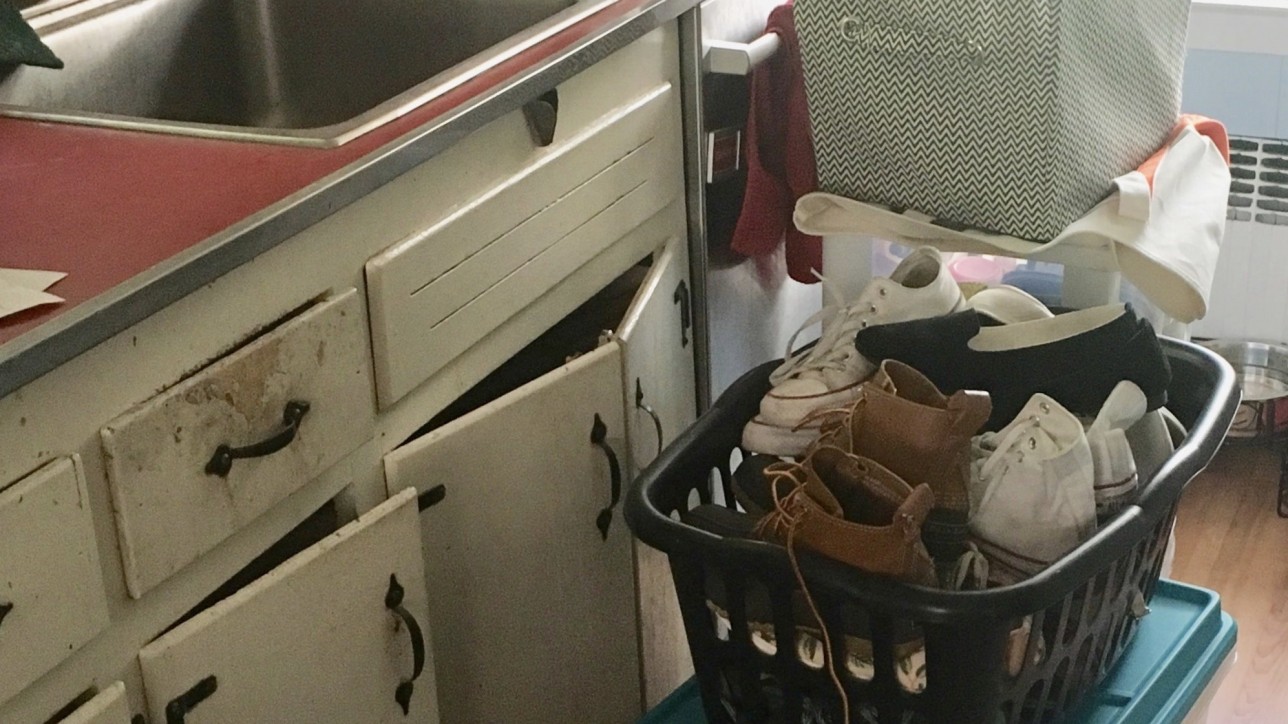 “What in the world are you girls blubbering about?” the ever-loving spouse asked as he carried another load of stuff out of the house and into the car that would transport the daughter and her belongings (most of them) to her new apartment in Brooklyn.

Under the guise of being incapacitated after a double knee replacement, I simply sat at the kitchen table and let things happen around me. I’ve actually gotten pretty good about avoiding the comings and goings of kids. The more removed from the process I am, the better for everyone.

The daughter moved home last June after living on her own, as an adult, for the last eight years. Granted, four of those years were college, which I’m not sure can count as adulting, but she wasn’t under my roof, eating my food (that I have learned to hide), leaving her long locks in the bathtub drain or overcrowding the already crowded hall closet with rubber boots, unbrellas, Converse sneakers, scarves, shawls and random other outerwear. (Mom, it’s a closet! Get over it.)

She said she was only going to be home for a month or two. Just until she figured out where she wanted to live. Being gone for eight years is a long, long time. Coming back after eight years is a major adjustment on everyone’s part. Except, of course, for the ever-loving father who sees nothing but pure bliss and joy in his children. As long as they’re working. Cutting the grass. And reading the newspaper.

When the daughter moved home last year, they were ALL home. The young ‘un had just graduated from college. The middle ‘un was working in Manhattan. And, now she, the old ‘un had reshuffled the mix.

So, her return to the roost wasn’t the cause of my unbalanced equilibrium. She just happened to be the one who tipped the scales. Sheer numbers dictated that the young and vibrant adult children now had the competitive edge over the old and tired adult parents.

Living in a 90-something year-old house with no master bathroom, I’ve come to the conclusion that no one over the age of 30 should ever have to share a bathroom. And, that once one reaches AARP status, it should be a God-given right to be able to pee at will and take a shower without having to wait for someone else’s steam to dissipate.

I believe I’ve done my time.

I deserve to sit and watch The Bachelorette on my 19-inch screen without having to defend myself. I should be able to savor the crispy, crunchy, overpriced grapes I hide in the refrigerator rather than be faced with empty stems and raisins. I have earned the right to have a kitchen clean for more than two hours.

I want to send a text without being asked who I’m talking to. I want to be able to feed the family with one single slab of beef. I want the Brita water pitcher to still have water in it when I come in from riding my bike.

I respond with a cold stare. Because asking has worked out so well, thus far.

As often happens in the revolving door of parenting, two months after the daughter moved home, the middle one moved to California. And while I was, in theory, heartbroken, I couldn’t help but smile knowing there’d be one less human in the bathroom. In the kitchen. In the house. Out of the house. In undisclosed locations until the wee hours of the morning.

And then, the young one went off on a 600-mile walk through Spain, immediately followed by a sleep-away summer job. With the daughter leaving the house for work before 7 every morning, returning a solid 12 hours later, things were really opening up at the homestead.

I was beginning to salivate over the thought of an empty nest.

But, when thirteen months later, after co-habitating as something somewhere between mother and daughter and jail warden and prisoner, she made her long-awaited move, surprisingly, my reaction was not a fist-pumping “Whoo hoo!”

Instead, I sat at the kitchen table, throat constricting, as I feigned more interest in the New York Post’s bashing of the mayor than in the heaving and hauling of boxes and bags and books behind my back.

As the dozens and dozens and two more dozens of clothes slip-slided off their hangers, I resisted the urge to suggest a makeshift garment bag made from a garbage bag. I sealed my lips before asking if she had left her attic bedroom half-way presentable. And I kept my mouth shut when I wanted to say, “You really think all those beauty products are going to fit in your tiny bathroom?”

I’m learning. I’ve been through this before.

“OK, we’re off!” the ever-loving father announced. He took a look at my face. And then a look at the daughter’s face. He shook his head as we sniffled back our tears.

“Oh no!” he exclaimed and then said the same thing he said when the middle one left for California. “What are you two blubbering about? This is a good move!”

All moves are good moves when you’re moving forward. But, no matter how hard we hope and pray that they will find their way, launch their lives and MOVE OUT, when the time comes, these dang kids just can’t seem to do it without taking another little piece of our hearts.