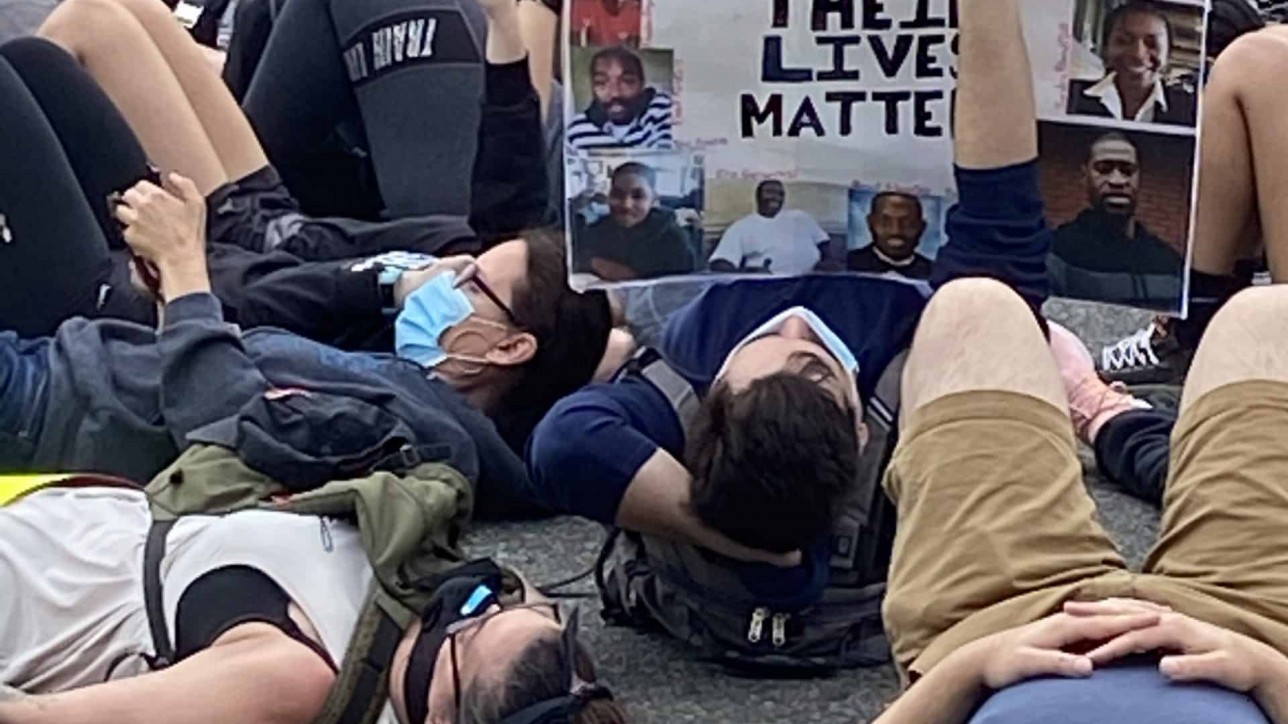 My son was 21 years old before I finally had “the talk” with him.

No, not that talk. That talk had gone in one ear and out the other years before.

This was the talk I never thought I’d have to have. The one my friends Heather and Angela and Katrina had with their sons long before the other talk. The one I used to say was unnecessary.

“Hey, Leo,” I said nonchalantly as I heard his keys jingle. It was pouring rain and he was picking up his posse and heading to a party in a neighboring town. “Be careful.”

As if those words ever made a kid stop and think.

“You know you have a tail light out. The police could stop you. So make sure you’re, uh, you know, polite.”

As far as I know, he didn’t get pulled over.

And of course, he didn’t get shot.

“You don’t get it,” Heather has said to me on more than one occasion. “You don’t have black sons.”

There is no yeah, but.

Before I moved to Teaneck, New Jersey, I didn’t have any black friends. Actually, I had very little experience with anyone of any color other than my own.

I was simply a product of my environment. I grew up in a white suburb outside of Philadelphia and my high school was filled with Jews, Protestants and Catholics, and those of Italian, Irish or Mayflower decent. That’s the extent of diversity I knew as a child.

When I was twelve years-old I was babysitting for some kids in the neighborhood. I was busy throwing together peanut butter sandwiches when the cat, who was not allowed in the basement, slithered down the stairs. I didn’t know (or care) what the cat’s name was because I hated cats. So I just called it by its color, just as I would have called a Dalmatian, Spot.

The basement door flung open and a black woman stepped into the kitchen.

I screamed, having no idea that their cleaning professional was in the house and was doing laundry in the basement. I then spent a good ten minutes tripping over my words. And the next fifty years mortified that she would think I would ever, in a zillion years call her Blackie.

Before I moved to Teaneck, I didn’t know any law enforcement officers either. Sure, groups of us were chased from Curtis Arboretum and Fort Washington State Park on a regular basis on Saturday nights.  And there was that one incident with Karen (there’s that name) Shea when she yelled, “Yo, Pig!” out the window of my mother’s Ford station wagon as we barreled down Paper Mill Road.

Sure enough, we got pulled over.

“What did you yell, young lady?” the police officer asked, after taking my license and registration from my shaking hands.

“I said, Yo, Peg!” always-on-her-toes-Karen answered. “I thought I saw our friend Peggy Haug.”

I spent the next two weeks scared to death that the officer would send a citation to my house or call my parents as he threatened.

He didn’t. But again, I was mortified.

Ironically, if Phillip Pannell, a black teenager, hadn’t been shot and killed by a white police officer in 1990, we probably wouldn’t have moved to Teaneck.

Teaneck was the first town in America to voluntarily integrate its schools and prided itself on blacks and whites living together in harmony. The shooting that brought Al Sharpton and Jesse Jackson to town left unanswered questions, split public opinion and incited protests and riots. My spouse was a police reporter at the time who covered the officer’s trial and later the town of Teaneck. Despite the polarizing effects the shooting had on the community, there was something about the character of the town and its people that shone through. We ended up buying our first house within sight of where cars had been overturned in the wake of the shooting.

Teaneck at the time was basically one third black, one third Jewish and the other third was a mixture of other races, including Caucasians. We were young and liberal, so we took the plunge and never for a second regretted our decision to live in a multi-cultural town.

My kids were a minority in the Teaneck pubic schools and I only slightly exaggerate when I say my boys grew up without ever having a white friend. We’ve had kids of all shapes, sizes, colors and creeds troop through our house, sleep on our couches and ride in the old minivan to one sporting event or another.

While my kids grew up without prejudice, they were also somewhat sheltered from racial discrimination.

When the daughter was in eighth grade, she had a friend who lived in one of those “rich, white towns” who wasn’t allowed to come to Teaneck because it was dangerous.

“You mean you actually sit at the same lunch table with the black kids?” the girl’s mother asked when the daughter explained how Teaneck worked.

And, when the daughter went away to college in North Carolina, she lamented over the fact that she had no idea how much racism there was in other parts of the country.

“Aren’t you glad you grew up in Teaneck?”

“Absolutely,” she said. “But it didn’t prepare me for the real world.”

I didn’t grow up in the real world either. While it would be futile to apologize for the color of my skin, I probably should apologize for all the times I ran from cops when I was drinking warm beers in dark parks. But never once did I fear anything more than getting killed by my parents if I got caught.

And that’s the difference.

So, I did what I could. I tried to raise my kids with open minds, kind hearts and accepting souls hoping that maybe, just maybe, they would help change the world.

“Are you marching on Friday?” my next-door neighbor, Kerri, asked from a distance as our paths crossed while doing our daily laps down Palmer Avenue. She was referring to an organized Black Lives Matter protest in Teaneck that was beginning on the road where Philip Pannell had lived 30 years ago and making its way through town.

Kerri looked at me with an eyebrow raised above her mask.

“What do you mean, it’s not you? You had more people of color in and out of your house than anyone I know. How can you not support this?”

I argued that I’m not an activist by nature. I don’t publicly campaign for politicians, I don’t post rants of injustice on Facebook, or display Hate Has No Home Here signs on my front lawn. I’m too afraid of doing the wrong thing and offending the wrong person.

“You have to go,” the daughter said. “Think of Koree and Kris and Jordan and Jamal and Siddiq and Chris and all those other kids who look at you as a second mother. You have to do it for them.”

Still, I balked, thinking that my red-haired, gray-striped, freckle-faced, color-coordinated masked self would be screaming white privilege as I made my way through town with my other white-skinned friends.

Joining a group estimated at 3,000, was as powerful a thing as I have ever done. While dozens lay their bodies down in an intersection for eight minutes and forty-six seconds, I was horrified at how long a time that was. And, realized that I will never, ever know what it’s like to live with the fear of that happening to me, or any one of my kids.

So, for the Hargraves, Matthews, Williams, Jones, Kendrick, McDonald, Brown, Johnson, Patterson, Wimbush, and any number of other families I know and love, it is my privilege to march for you.