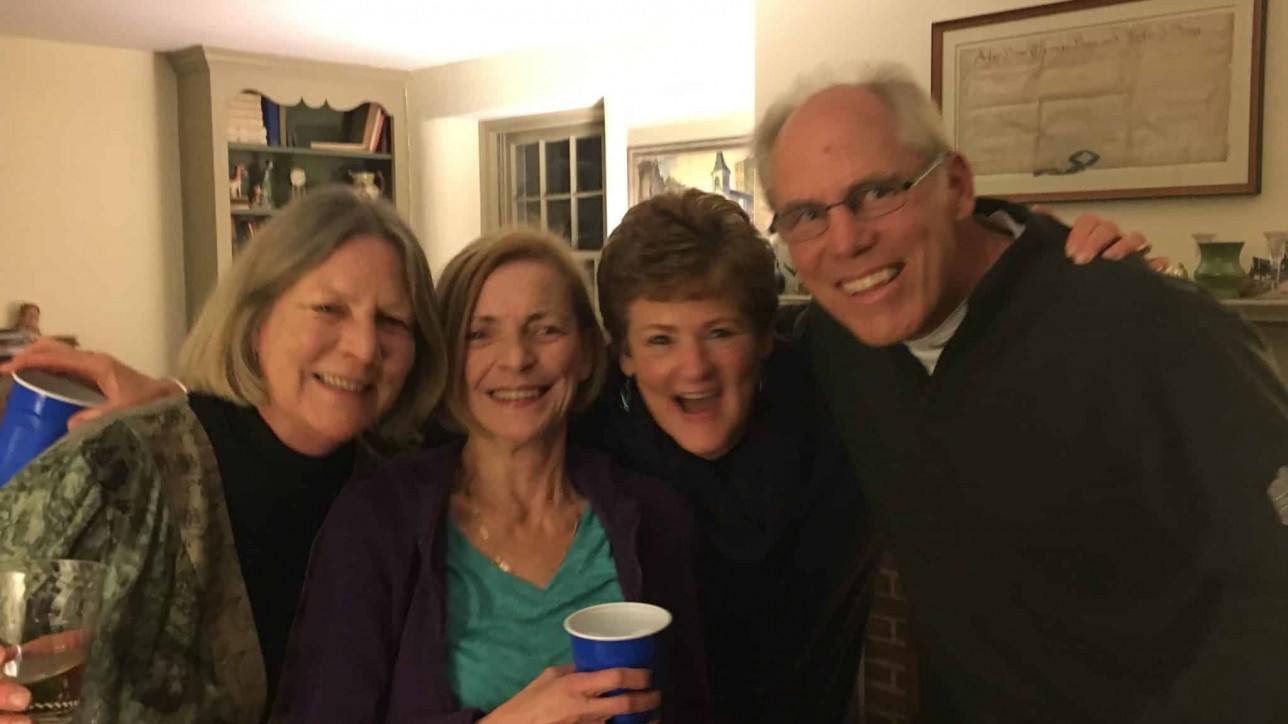 “Mom!” the daughter says in a phone call from a time zone away. “I’ve got a great idea.”

At which point, I cringe. Then, I do what I refuse to do in yoga class. I breathe. And then, I respond.

“What’s your great idea?” I say trepidatiously. Because experience has taught me that when my offspring have a great idea, it either costs me angst, energy or money. Often all three.

“Why don’t we go to Jamaica for Christmas!”

“Great idea!” I say, thinking I’m keeping all traces of disdain out of my voice.

“Why not?” she counters. “You wouldn’t have to buy us any presents. We’ll just go away instead. It could be a new tradition.”

I grew up on Woods Road, a horse-shoe enclave of a road in the suburbs of Philadelphia. My family moved in when I was four years old and the friends I made then are still my friends today. We grew up at the end of an era – that era once known in storybooks as Childhood. We lived a free and fun and unscheduled life and miraculously lived to tell the tale. We roamed the road in a pack, entertaining ourselves by calling phony numbers, riding bicycles from house to house, walking to Perkels’ Pharmacy, contacting JFK through séances on cold, rainy days, and playing Capture the Flag until dark on hot, summer nights.

And then we all grew up and went our separate ways.

But we always come back on Thanksgiving Eve.

There’s a whole tradition around Thanksgiving back on Woods Road which is fully chronicled in a post called The Toilet Bowl.

But, the short of the long story is that the Thanksgiving Eve party is an intergenerational event that isn’t likely to go away unless, of course, the Schaeffer house is sold in a sheriff’s sale. And the likelihood of that happening keeps my hope alive.

“We’re going to stop at Sandy Scott’s house before going to Schaeffer’s this year,” my sister, Emily, announced.

“It will be fun. You’ll get to see Wayne Marcolina and Brian Nelson. Debby Conly will be there. And Sandy’s sister, Linda. You always loved Linda!”

I spent a lifetime in high school jockeying for an invitation to party with the likes of Sandy Scott. She far outweighed me …in the popularity poll. But somehow, in the 40 some years since we’ve been young, the distinct lines between the cheerleaders and the cheerfearers, the druggies and the drugless, the smart and the smart alecs blur and we find common ground, wondering why in the world we never hung out together, way back when.

My blanching had nothing to do with not wanting to fraternize with the friends of Sandy Scott.  I just was afraid to break tradition. My tradition dictated that I went to Schaeffer’s and only Schaeffer’s on Thanksgiving Eve. And I arrived by 8 pm.  If we went to Sandy Scott’s, I knew I’d want to stay and we’d be late.

And that’s exactly what happened.

But, when all was said and done and I had talked my tongue off both at Sandy Scott’s and at the Schaeffer’s, I realized that traditions can transition and still be just as traditional.

At this time of year, the world is steeped in tradition. We go to annual holiday parties where we spin dreidels and give gelt. We wear red and green and eat stuffed mushrooms and pigs-in-a-blanket. We buy gifts we can’t afford and get gifts we don’t need. We gather at elaborately decorated dinner tables with relatives we don’t like. And we do it all, year after year. Because, it’s what we do.

Traditions can get old and stale. Bothersome and boring. Dull and dreadworthy Unless, of course, you shake things up every now and then. Do something really radical like open presents on Christmas Eve. Engage the drooling Uncle Drew in conversation. Throw the football around with the high school kids. Turn down that one-more glass of wine or piece of pecan pie. You know the one – the one you wish you hadn’t had. Or go for it, if you usually don’t. Invite friends to your all-family festivities. Give an unsuspecting, or even an undeserving person a gift. Stop at Sandy Scott’s Thanksgiving Eve party before the Schaeffer’s.

And, if the Santostefanos don’t invite you for Christmas dinner this year, then go ahead and book that trip to Jamaica.

Because, after all, there’s always a new tradition just waiting in the wings for an old tradition to be broken.