Can’t you just learn our language? 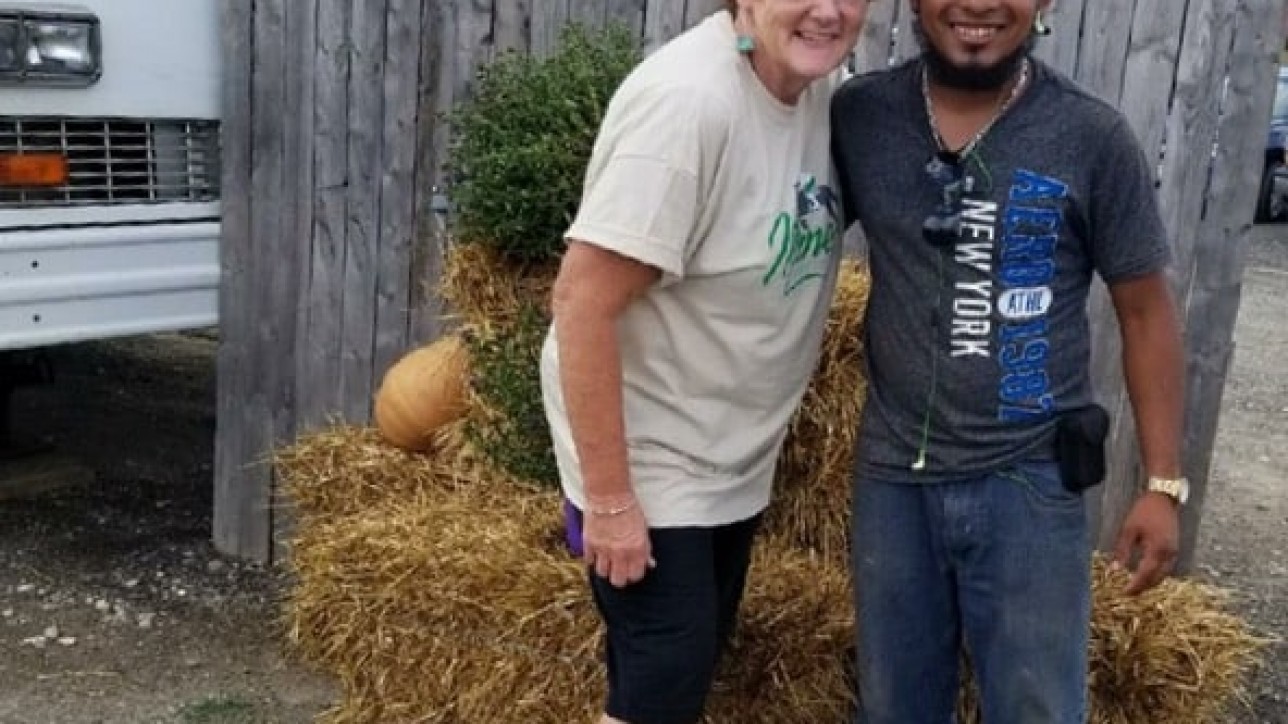 “Why is it,” I asked Diana, my lovely 22 year-old bi-lingual co-worker. “That when I say, Anything else? those guys all nod but then don’t order anything else?”

“Because they don’t understand what you’re saying,” she answered.

“How can they not understand what I’m saying?”

I rolled my eyes and took another order from another Spanish-as-a-first-language customer, assuming from that moment forward that a nod meant, “No, I’m good. That’s all I need.”

I was back on the Food Truck, working a 12-day stint at the Capital Challenge Horse Show in Upper Marlboro, Maryland which is somewhere in somewhat close proximity to Washington, DC. We were working long days, sometimes from 6 am to 9 pm and I spent the time bent at the waist, leaning down to take food orders from hungry horse people.

Hungry horse people range from six year-olds showing their ponies to seasoned professionals traveling the circuit more weeks than not throughout the year. There were owners and trainers, stable managers and barn hands, handlers and grooms, riders and spectators, blacksmiths and braiders, announcers and judges, office workers, horse doctors, show owners and a whole slew of handsome guys who worked the grounds.

This slew of handsome guys who worked the grounds made our day. They were fun and happy and never missed a meal. For the most part, they were Spanish-speakers who knew enough English to get by. Those who didn’t were were covered by those who did.

“He wants a steak sandwich, no peppers,” Ricky, one of my favorite boyfriends would pipe up when I was struggling to make sense of one of the four Juan’s orders.

Ricky nodded. And I knew it was time to ring up the tab.

I grew up in an all-white, English-as-a-first-language Philadelphia suburb where my exposure to other languages was limited to the classroom. I took French in high school and with the help of a dictionary would be able to order a hunk of cheese and a baguette in a pinch in Paris. But Spanish? I can’t get beyond hola. And certainly wouldn’t be able to put the upside-down, right-side up exclamation points in the correct place to save my life.

As the world got smaller and I got older, I found myself raising my family in a town renowned for its diversity located right outside of New York City. My white kids were minorities in the public schools and friends of all cultures passed through my kitchen thanking me for rides and meals and homework help in all different tones, variations and comprehensions of the English language. I have had a zillion first generation American friends, many who were born in other countries and moved here in their youth and have taught ESL conversation classes to Korean and Japanese women whose husbands’ jobs have brought them to the US.

But, I didn’t really get the whole language thing until I met Daniel.

“Hola!” Daniel chirped from the other side of the food truck. Daniel worked for one of the horse farms and was on his fourth coffee of the morning.

“Hola!” I responded, thinking I was pretty savvy.

“Oh, you know Spanish!” he exclaimed, feeling pretty certain that I didn’t.

“That’s French,” Doug called over his shoulder as he threw together a breakfast burrito.

“How do you say I speak Spanish in Spanish?” I whispered to the aforementioned bi-lingual Diana.

“Yo hablo espanol,” I repeated in my English-accented Spanish and Daniel laughed.

“What did he say?” I whispered to Diana.

“He says you’ll be fluent in Spanish by the end of the week.”

And off he went.

The next time Daniel showed up at the Food Truck, he ordered his sandwich in Spanish with a “Comprende?”

I nodded my head, though I didn’t comprende nada.

“Ha!” Diana chimed in. “You did exactly what they do. You just nodded your head because you don’t understand what they’re saying! Now do you get it?”

It wasn’t long before I had mastered how Daniel liked his bacon, egg and cheese on a bagel and memorized the Spanish words for five dollars and fifty cents, you’re my favorite boyfriend and how many coffees have you had?

Daniel was relentless. No matter how busy we were, he only spoke in Spanish. It got to the point where I’d see him coming and run to the back of the truck to make coffee whether we needed it or not. I’d hobble to the port-a-potty when it was time for his afternoon snack and I’d accidently on purpose position myself to take the next full-fledged English-speaker in line, leaving Diana to deal with Daniel.

I found myself getting flustered and anxious trying to keep up with Daniel. I felt embarrassed and stupid. And for the first time in my life, I held my tongue. Simply because I didn’t know how to say what I wanted to say.

By the end of the horse show, I was far from fluent. But I had learned a few Spanish words and could catch the gist of the truck banter between Diana and the short-order cook, Goomer (which I’m 100 percent sure is not how he spells his name).

But in attempting to learn Spanish, I learned something far more important. I saw first-hand how difficult it must be for people in our country who are trying desperately to assimilate and speak our language. How humiliating it can be. How annoying it can be. And how horribly rude some of us can be.

So, to all of my heavily accented friends and friends-to-be who, in just wanting to be understand and be understood, have been met with eye rolls and heavy sighs and impatient responses, all I can say is: