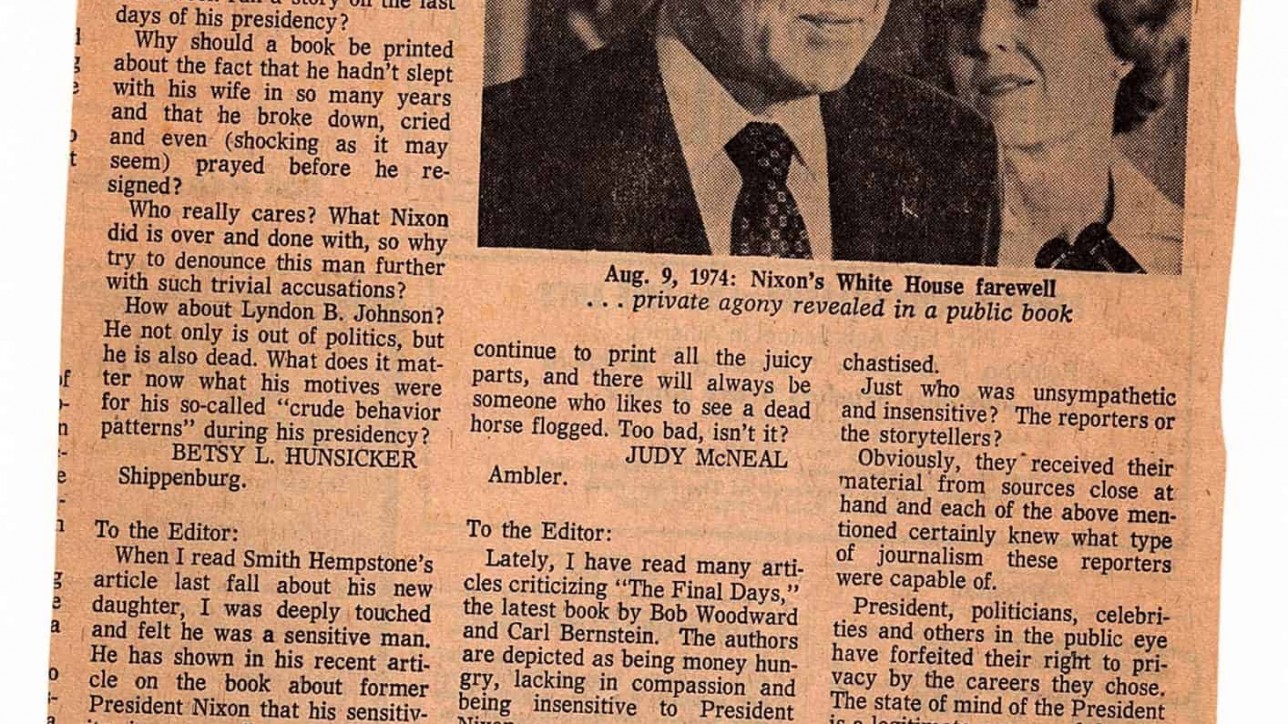 Deep in the bowels of my closet in a tattered leather suitcase decorated with brass hardware and faded travel stickers are my favorite memories, some of which have survived 50 years. There is an autograph book from 1966 in which I collected signatures from people as famous as my second grade teacher; an address book from 1989; a handwritten assurance that my spouse-to-be loved me; a note my mother slipped into my suitcase on my first day of college; my Girl Scout sash, boasting a dozen hand-sewn badges; a postcard from my oldest friend, Margaret, written from her family vacation at Indian Lake; my diploma from West Virginia University; a stack of letters from my friend, Bob, who spent a year in Taiwan and proof positive that I was once a Nixon supporter.

It’s a yellowed newspaper clipping from the Philadelphia Inquirer; a Letter-to-the Editor I had written in response to Woodward and Bernstein’s newly published book, The Final Days.  In it, I blasted my fellow Americans, saying it was time to “let sleeping dogs lie,” and to leave “poor” Mr. Nixon alone.

I grew up in an idyllic enclave in the suburbs of Philadelphia. Republican children ran loose through the streets, parroting our parents’ beliefs and teasing the Schaeffer’s for being the only liberals in the neighborhood. As a teenager, I begged and begged and begged some more to get my ears pierced. My parents’ response was unequivocally no. One day, while leafing through a magazine, I came across a picture of Caroline Kennedy.

“See!” I waved the photo at my parents as they watched Mike Schmidt smash another ball into the stands at Veterans’ Stadium from the comfort of our cozy, wood-paneled den. “You say pierced ears look cheap. But, look! Even Caroline Kennedy has pierced ears!”

“Exactly our point,” was their dead-panned response.

I never cared much about politics, and much to the chagrin of my devastated daughter and erudite spouse, still don’t. I remained a registered Republican until I got married and moved to north Jersey. I felt there was something oxymoronical about holding on to my Republican roots while living in the first town in America to voluntarily integrate its schools, married to a man who believed with all his heart that every person in the world was created equal and deserved an equal chance.

I believed that’s what it meant to be a Democrat. I also believed that just by virtue of being me, I’d be inflicting enough damage on my children and they deserved the liberal love of a Democrat for a mother.

All it took to cross party lines was a simple piece of paper. And just like that, I became a liberal Democrat.

Some of my best friends are Republicans. Yesterday, I told one of my nearest and dearest, whose name I dare not reveal, that if her beloved candidate was elected she may lose her undocumented dog poop picker-upper. Yes, she pays someone to do that. Another friend lambasted Obamacare and I half-heartedly defended it, having no idea what I was talking about. And I even said aloud that maybe the Donald didn’t really mean it when he made all those off-color comments. After all, I’ve been known to spew a contemptible word or two myself before my brain catches on and slams on the brakes.

“Yes, but,” comes the inevitable response. “You are not running for President of the United States.”

Today, as I scroll through social media, I see how many people are sad and stunned and scared to death. I talk to my friends, some who admittedly voted for Trump, some who won’t admit it, and some who crossed party lines. I commiserate with the Hillary supporters and feel the weight of their defeat. Throughout this bitter battle for the White House, there have been way too many ugly arguments, heated discussions and unfriended Facebook friends.

But as for me, I contend that my friends are my friends, no matter who they voted for. Everyone has their reasons for doing what they do. I may not understand their reasoning. I may not agree with their views. And I have certainly not walked in their shoes. There are Hillary supporters out there who are absolutely abominable human beings, just as there are Trump supporters who are lovely, loving people.

I’m not going to write a letter to the editor about his one. But, I will write a blog. And this time, instead of defending the despicable, I’ll suggest instead that we, Trumpers and Hillsters alike, try to keep the hate out of our hearts. Let’s just keep being the good, kind, progressive people we know we can be and help to heal this great divide.

And as we do that, let’s hold on to the hope that maybe, just maybe, one day we will all look back, across our party lines, and be able to say, “He did it! He made America Great Again.”

After all, stranger things have happened.