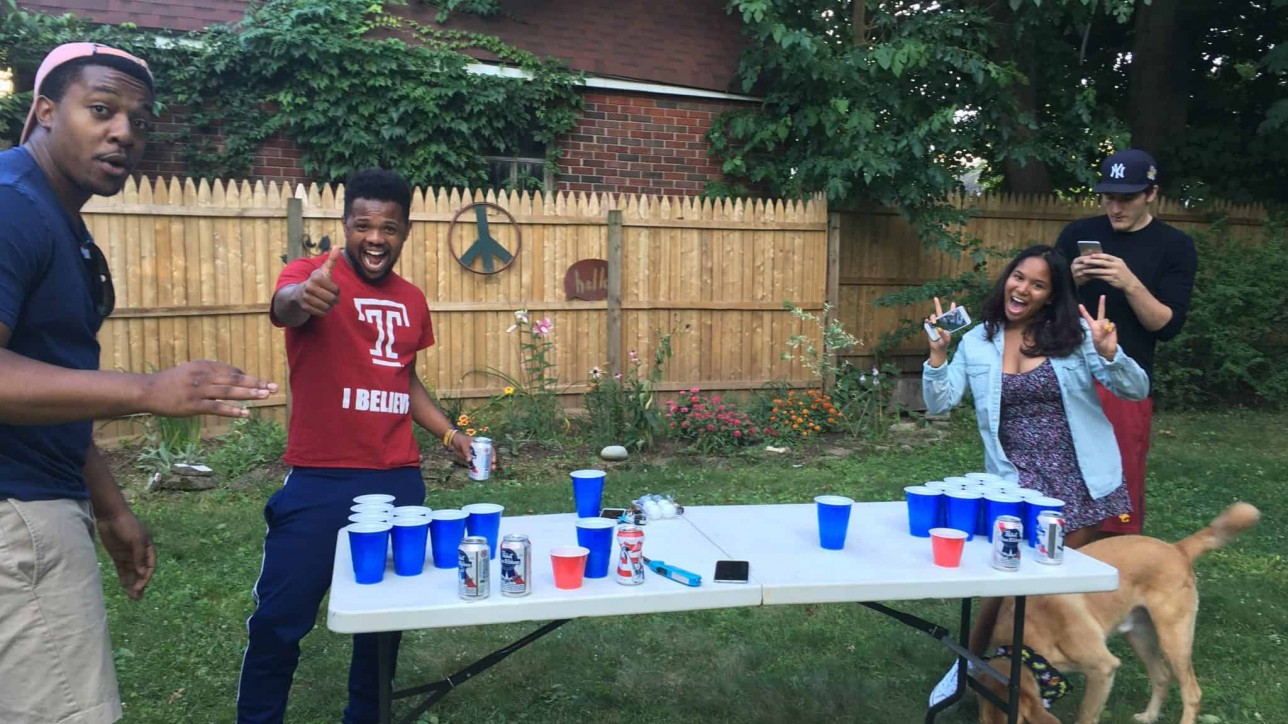 “It’s 7 pm on a Tuesday night.  He’s been home less than 24 hours. And by the way, that’s your table in the picture,” I texted my friend Angela.

“The boys felt incomplete without him,” she answered.

“LOL. I know exactly how you feel.”

I’ve never had a kid move back home after college. I lucked out with the daughter who took a Teach for America job in New Orleans immediately after graduating. She’s threatened, but never moved back home.

Once the youngest went off to college two years ago, I became a part-time mother, which suits me just fine. Most of the year is free from fretting and flipping out, because I only do that when they’re in my physical space. Sure, I get mildly concerned with the “I didn’t realize if you fail a class it gets averaged into your GPA,” or the the “I never knew they doubled your fine if you didn’t pay a parking ticket,” or the “I have to have my original birth certificate by tomorrow, are you sure you gave it to me?” calls.  But, mostly I can let things roll off my shoulders.

My middle child went to California for college. He has highfalutin tastes and knows not to even ask for help in purchasing hundred-dollar jeans. Or over-priced hair products. He always worked multiple jobs while in school so he didn’t have to alter the lifestyle to which he had somehow become accustomed. Working multiple jobs meant less time home between semesters and in the summers. So I really haven’t seen much of Max in the past four years.

And I’ve learned I can put up with a lot when I know there’s a plane ticket dangling in the not-so-distant future.

I love Max. He’s fun. He’s a hard-worker. He’s smart. He’s independent. He’s a people-pleaser. And I like to be pleased.

Maybe he won’t eat leftovers, but he doesn’t complain about it either. He just quietly picks up and goes to Victor’s for pizza. He leaves the toilet seat up, but I’m so used to falling in the toilet bowl in the middle of the night that it doesn’t even make my list of minor annoyances. He takes the car that he and his brother share without asking, but he fills up the tank. He drinks too much of my Diet Coke, but he does the grocery shopping for me. He loves my tacos, the dog and most of all, his friends. But he loves me, too. He even put it in print.

So, I was not as worried as one might think at the prospect of him returning home.

He graduated in May but was finishing up a class and a job so didn’t come home until Monday night.

“I donated five bags of clothes to Goodwill,” he announced after dragging multiple suitcases into his room. The room that had become the family closet in his absence. The room that I spent two days cleaning so he’d have a place to sleep. The room that still houses a twin-sized bed in which his six-foot-three frame unfolds every night. The room that you can no longer see the floor, so completely covered it is with his California stuff.  And will be for several months.

“You going out with your friends tonight?” I asked when he got home around 10 on Monday night.

Music to a mother’s ears.

“Why don’t you apply for some JOBS?” the father gently suggested.

Max slept late on Tuesday morning which was fine with me.

My desk is set up in the front window on the first floor in an open nook adjacent to the living room. I look out onto the front yard where I get a ringside view of the fluttering birds, blooming flowers and neighbors, as they come and go. My kids park their car right smack in front of my desk so I’m always forewarned when my peace is about to pass all understanding.

I love my home office. But there’s no door. No sound barrier. No privacy. Which is why, when another human being steps into the main floor of the house, I lose concentration and revert into mom mode. I offer everything from sandwiches to advice with a little laundry in between. The reasoning is, if I take care of all their needs before they ask (which they may or may not do), I can get back to work.

That, “Maaaaaahhhm,” out of any of their mouths is a trigger. One I can’t ignore. Which is why I ignored the need to make money for far too long.

But for the past couple years I’ve been back in the saddle, crafting words into dollars to help pay the bills. I have my routine and it works. Until they come home.

On Tuesday afternoon, less than 24 hours after the prodigal son returned, I heard the unmistaken boom, boom, boom of a radio turned  up way too loud, half a block before the old, gold Acura pulled up out front. I finished typing a sentence, took a deep breath and watched Max and three of his friends barrel out of the car, into the house.

“Oh, we just unhooked them when we pulled onto your road,” they said, almost in unison.

They piled onto the back deck and I made an attempt to go back to work. After all, these were grown men now. I didn’t have to offer them penne vodka anymore. They’d just as soon have it straight up.

“BRB,” Max said as two of them darted through the house and out the front door.

“Where you going?” I couldn’t help but ask.

Fifteen minutes later, with the arrival of Susie, the backyard had been successfully transformed into a Beer Pong arena.

I simply went back to my desk and texted my friend Angela to commiserate.

The Beer Pong tournament ended before it got dark and they dispersed by Uber to parts unknown. When I got up for a bathroom visit at 3:23 am, Max still wasn’t home. But I heard his air conditioner rumbling behind closed doors when I rolled out of bed at 8.

My spouse, who left home at 18 and, except for a summer or two, never lived there again, has mocked me mercilessly for moving in and out of my parents’ house until I was 26 years-old. And now that I have kids dangerously approaching that age, 26 doesn’t seem as old nor independent as it should.

I have since learned that a friend is coming from LA next week when the father and I are away.

And, I’m certainly not going to tell you exactly when we’re leaving and when we’re returning, either. That much I learned in Parenting 101.

I also learned that he will be throwing a welcome home party for himself next Saturday.