How old would you rather be? 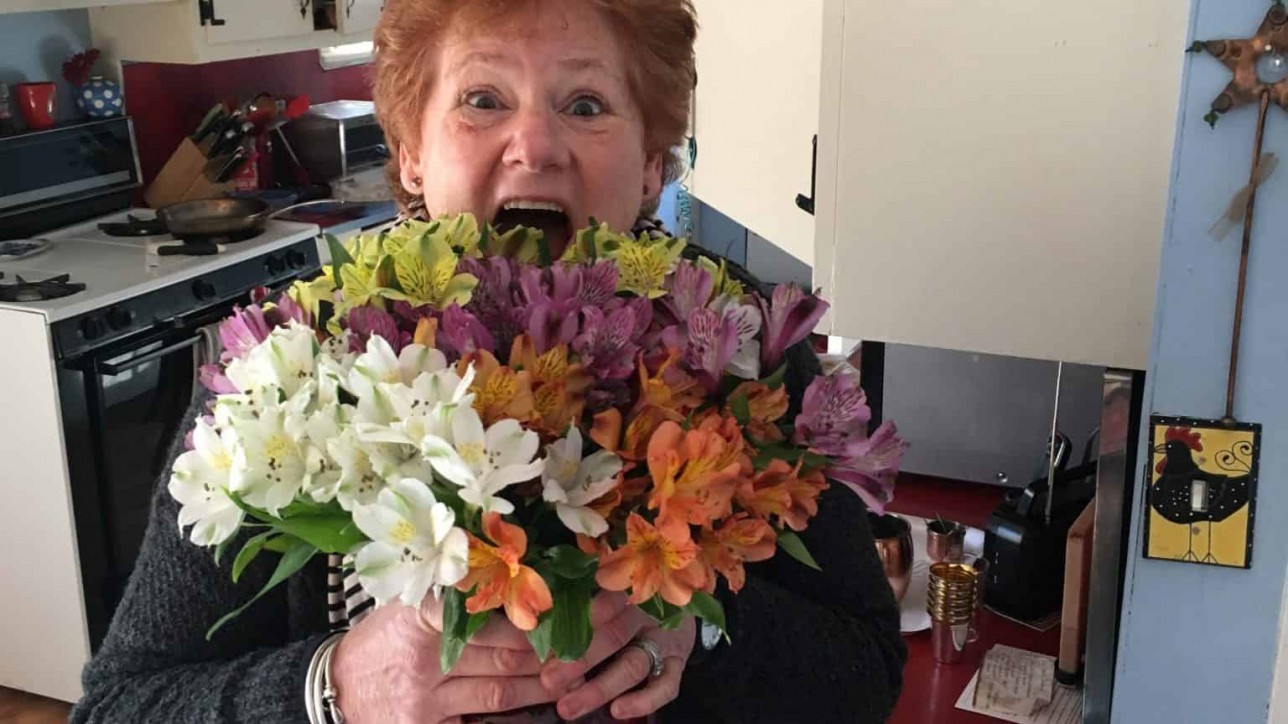 A long, long time ago, when I was approaching a monumental birthday, I had a conversation with my dear friend, Kit, who I’ve known since I was five years-old. Kit has always been older and wiser than I, and so I’ve always taken her words to heart. While lamenting what I then thought was old age, she countered with, “How old would you rather be? What age was better than the age you are now?”

Four months old. What could be better than life at four months old?  Not that I remember, but I suspect I just kind of floundered about waiting to get taken care of. I gooed and I gaaed and got to drink all of my calories. I could sleep all day. I could sleep all night. And if I didn’t, it didn’t matter because the next day I could. But then I dug out some photos of life as a wee one and saw that, though I looked happy as a clam in my pram, I was actually prisoner to a cumbersome cast. From birth until nine months old, my legs were splayed and my privates exposed, though my mother claims these particular photos were taken between (cloth) diaper changes. I was born with a dislocated hip and this was what was done back then to assure I’d be able to run and jump and play. And I did, eventually. But, I’m thinking, maybe four months wasn’t all that great after all. 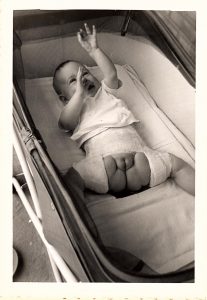 So, then five years old. What a perfect age! I was cute and feisty and had a royal blue dress that I remember to this day. I had two older sisters and a younger one, too. We had a Dalmatian named Pongo. And we had just moved to Woods Road. Having worn out our welcome at the grandparent’s while the new house was under construction, we moved in before the kitchen was finished. We had all kind of fun meeting the multitudes of kids in the neighborhood (including the aforementioned Kit) and spent our days dodging Mr. Nicodemus as he hammered and sawed our house into a home. But what I remember most was the stairs. They didn’t yet have backs on them and walking up to my bedroom, I could see all the way down to the basement. I was paralyzed with the unreasonable fear that I’d fall through, dropping one of my precious china dogs that I carried with me at all times. I simply couldn’t shake that terror and had many a nightmare and took many a teasing from my older siblings over my baby-baby-bushwack behavior. Maybe there’s a better age than five after all. 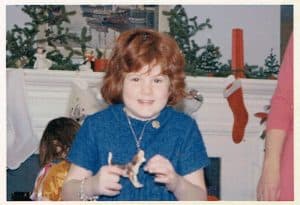 Seventeen. Oh, to be a high school senior again! I was socially satisfied, having successfully crossed all cliques, befriending the smart, the dumb, the jocks and the stoners. I was anxiously anticipating my new life at Wake Forest University where I would be a Creative Writing major, meet the man of my dreams, marry shortly after graduation and live a Please Don’t Eat the Daisies kind of life. What a wonderful time I thought I had had. Until I re-read my diary that began, “Let me describe myself. I’m fat and have red hair and freckles.” Two out of three were true. Every day in that diary held a new best friend horror story. Every week, a new unrequited love. Every page was filled with bubbling angst and plummeting self-esteem. Which hit rock bottom when I didn’t get into Wake Forest. Nah, don’t think I’d want to live through that again. 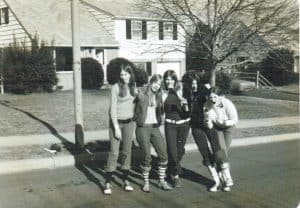 How about twenty-seven? I was gainfully employed at TV Guide magazine where I had worked with fun people who became lifelong friends. I lived with my sister, Nancy, at Sherry Lake Apartments where we ate frozen dinners, destroyed silverware in the garbage disposal and threw keg parties on weekends. I traveled far and wide. To Moscow and Hong Kong. Manila and Paris. I had the kind of fun you can only have when you’re young and free and fearless. But, as my friends succumbed one-by-one to the institution of marriage, I was absolutely convinced that I would never, ever be loved. And never, ever have kids of my own. And that hurt my heart and scared the bejesus out of me every single day.

Then, thirty-four. Nothing in the whole wide world can compare to becoming a mother for the first time. My baby daughter lived in the corner of the dining room in our one bedroom apartment in an antique cradle with homemade bumper pads my sister sewed herself. Oh, the attention! The gifts! The flowers! The absolute joy of having a newborn baby. The surprising simplicity of feedings and changings and burpings. That is, until the spouse went back to work and I was left, home alone with an infant, scared to death I would do something wrong. A feeling that never left me until the very last one grew up and left the house. 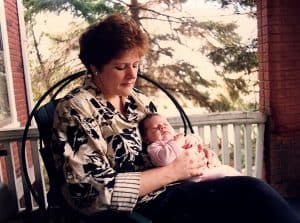 Which brings me up to where I am now.

I’ve just passed another birthday. Not a monumental one, but close enough. And as I thought about my conversation with Kit, I realized that, as usual, she was right. While I can unequivocally say I have loved every minute of my life, I also know that my mind is really, really good at rewriting history. But I also know that as we age it’s perfectly normal to bewail our lost bodies and mourn our thwarted dreams. And so I will. Time and time again.

But, as I’m doing so, I’ll do it knowing, for sure, that there’s no other age I’d rather be than that which I am at this very moment.

After all, I’m finally old enough and wise enough to know I don’t have much choice in the matter.