It’s not as easy as it looks 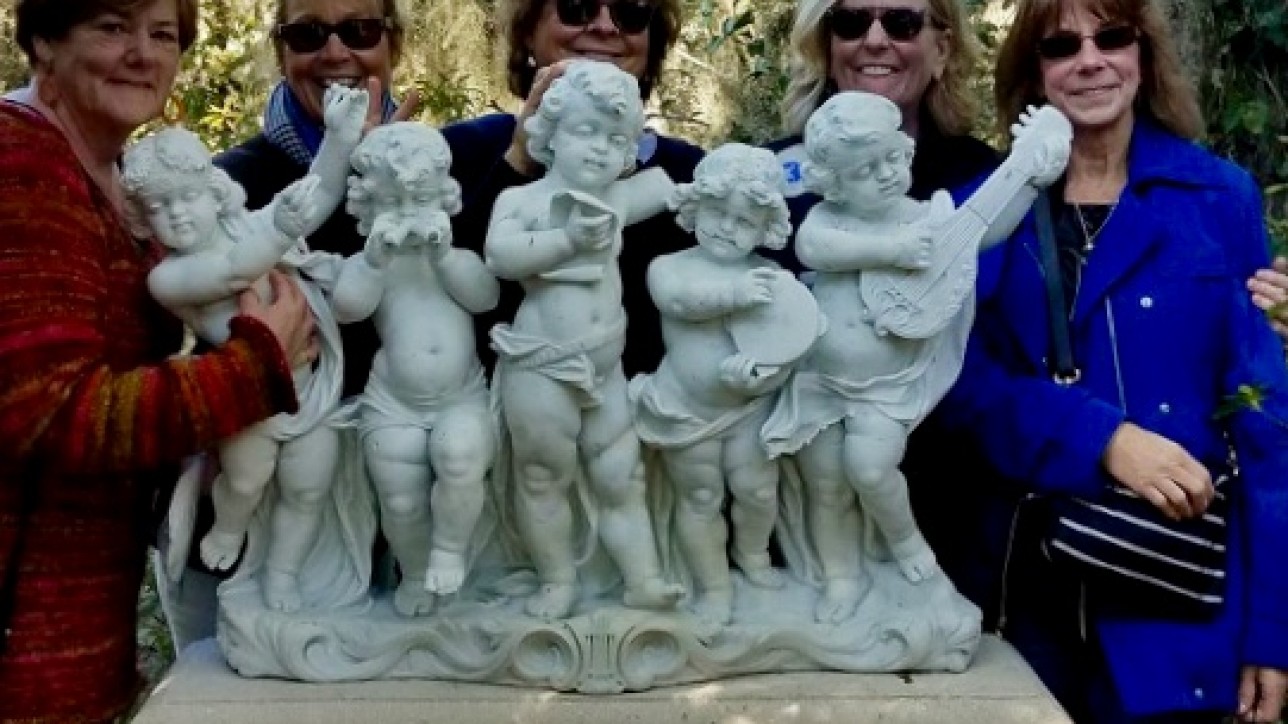 “You are so lucky to have a core group of friends like that,” said my sister, Nancy, after serving us up some good southern hospitality on a recent girls’ trip to her home town of Charleston.

But, alas, luck has nothing to do with it. Keeping friendships alive is work. Fulfilling work, for the most part, but work all the same. Contrary to popular belief, girlfriends don’t just miraculously appear for a weekend together, and certainly not for 40 years in a row. Someone has to take the reins and do whatever is necessary to make it happen, including the tried and true methods of persuasion, guilt, and bullying.

Back in the very, very late 70s, we were finishing our stints at Shippensburg State College. I say finishing, rather than graduating, because some of us did, some of us didn’t. A couple of us transferred to institutions of higher learning, and some of us just threw our sociology notes in the air and left. For jobs, or boys, or simply to save some semblance of sanity.

That last spring, at a party at Leslie’s mother’s house in Pennsylvania, we promised to turn this ending into a new beginning. Regardless of how often our paths crossed during the year, we vowed to get together the first Saturday in December for the Annual All Girls’ Christmas Party for ever and ever, amen. Attendance was mandatory.

For a good twenty-five years, we rotated houses, sending spouses and subsequent children away for the night. We’d gather around 4 pm with grab-bag gifts and we’d eat, drink, and be merry, returning the house to its rightful owners by 11:00 the next morning. As our lives got more complicated and we saw less and less of each other on a regular basis, we realized that one short night together was not nearly enough. And since December was becoming increasingly busy, we deviated from our plan. We began renting off-season vacation houses for three nights in the fall or winter, lugging sheets and towels and pillows and enough food to feed an army up and down those stilted beach house steps.

Recently we have started springing for occasional hotel trips to places like New Orleans or Charleston, opening it up to any other Shippensburg cronies who want to tag along. In 40 years, the only one who has never, ever missed a girls’ get-together is Peggy. The rest of us have taken a year off here and there to breastfeed babies, battle blizzards, move to a new house, or attend a funeral. But, the weekends weren’t rescheduled for minor events like a kid’s soccer game, a husband’s birthday, or a daughter’s wedding.

Peggy’s our pusher. She starts nudging the day after we’ve returned to pick a date for the following year. I’m our planner. I have the most quirks and requirements, so I come up with the place. That way, if there’s mold in the toilet or crumbs in the bed, I have no one to blame but myself. And then, there are the others, who just show up when and where we tell them, happy to have someone else in charge for a change.

We could have called it quits after Chris Kirk called it quits for reasons none of us even care about anymore. We could have taken the year off after the other Chris died. We could have taken a break when one of us had back surgery. Or hip surgery. Or knee surgery. Or breast cancer. Or a relapse to rehab. Or when we were broke from paying for our kids’ colleges, or sad over a divorce, or so in love with someone new that we couldn’t bear to leave. We could have skipped it when our kitchens were getting gutted, our car engine lights were blinking inexplicably, or when our favorite dog crossed over the rainbow bridge. We could have been too busy, too bored, too worn down by our Raynaud’s syndrome, or too worried that our depression, anxiety, or addiction would rear its ugly head.

So many times it would have been so much easier to just table the Girls’ Weekend, just this one time.

But, we never did.

Instead, year after year, we bring all our pain and angst and joy and silly stories with us, letting them bounce off each other until our souls are settled and our hearts are full.

We give group hugs, blink back a few tears, and return to our routines, rejuvenated and ready to face all our demons and delights. And as we do, we can’t help but think how very fortunate we are to have each other.

And, that maybe luck does have a little something to do with it, after all.