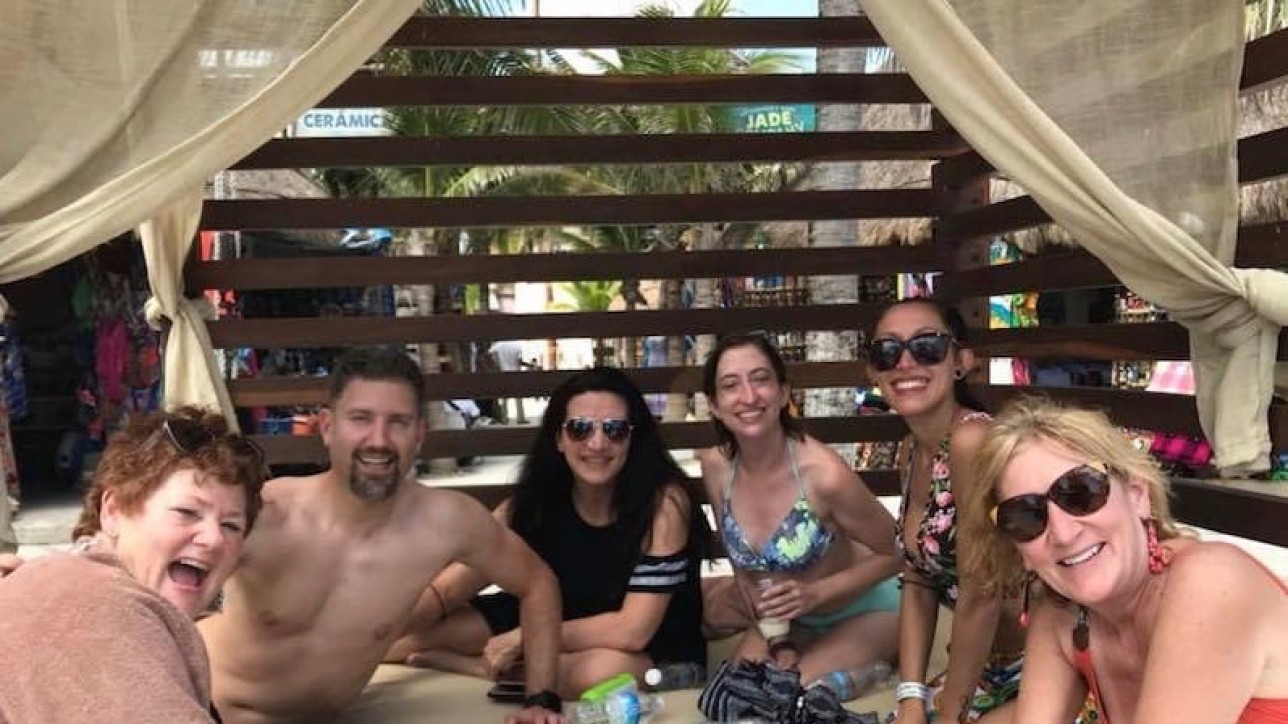 “Oh, thank God!” Stuart, who we did not yet know as Stuart, effused as Patty and I stepped into line behind him. It was the kind of greeting two 60 year-olds would neither expect, nor deflect, for that matter, coming from a handsome 40-something year-old standing hand-in-hand with a beautiful brunette.

“We were afraid we were going to be the only two doing this!” he said. “I’m Stuart. This is my wife, Jamie.”

In the middle of exchanging niceties, two twenty-somethings flurried breathlessly into line, donned in bikinis and sarongs.

“We had to buy Nicole a swimsuit!” Kelly, who we did not yet know as Kelly, revealed. She spoke in South Californian and sported a huge Native American symbol inked on her left thigh. And ear gauges.

“She missed the bus to the Mayan ruins so I said, ‘Come do this with me!’ So we bought her a swimsuit from one of those Mexican guys for 35 bucks.”

I didn’t even have to look at Patty. We both knew how this story would end.

When we hit the ports on our annual cruises, Patty and I often book the Most Popular! Most Fun! excursions. We go snorkeling, even though I recoil at the mere thought of a fish swimming betwixt and between my legs. But, I’m a good friend and it’s one of Patty’s pleasures, so I acquiesce, though often swim maskless in the Caribbean Sea to avoid magnification of those brightly-colored, slimy-finned creatures. We’ve done our share of tastings and tours and walking around tourist-made towns buying junk we neither want nor need.

But sometimes we shake things up a bit. In St. Kitts, we took a rickety ride on a rickety train through defunct sugar plantations with a bunch of senior citizens. In Tortola we went on a motorboat and swam to shore for Painkillers at the Soggy Bottom Bar. In Grand Cayman we rented bicycles and were deposited on deserted seaside trails with nothing more than a ‘See ya in a few hours!’  In Jamaica, we rode a ricketier than the rickety train ski lift up high over the jungle, over the mongooses, to the top of a mountain which we proceeded to zip-line down. Then rode bobsleds like the Olympians do.

And this year, in Mexico, we went for a Mayan Spiritual Wellness Retreat. There was something so marvelously juxtapositional about the over-the-top over-indulgence of a cruise and “experiencing a holistic day of wellness and spiritual cleanse in Costa Maya” that I simply couldn’t resist.

So, there we were. With Stuart and Jamie, Nicole and Kelly, being stripped of all our worldly possessions and asked to follow a real-life Shaman through earth, fire, wind and water.

“Oh, come on! I have to walk around in a bathing suit?” I protested, side-eyeing the forty-year-old, not to mention the twenty-year-old bodies beside me.

“Absolutely no judgment in this group,” said Stuart, bless his heart.

I am a spiritual healer’s worst nightmare. I wriggle. I giggle. I resist. I recoil. And I have never relaxed in my life. But, I am a follower. And so, I followed.

Right into the room with the purification bath. Looming before me were six deep tubs filled with whatever they fill Mayan baths with. Now, on the best of days, I can’t climb a single stair without shooting pain in my knees. And this, while not the worst of days, was worse than usual as I was nursing an infected, gushing wound on the top of my foot. I couldn’t help but wonder how I’d be able to lower my aching body into this pool of water, if that’s what it was, while keeping one foot out, without landing like a Mayan manatee.

I made it in somehow, some way, without flooding the floor. Patty was next to me on one side, Kelly on the other and we closed our eyes while young Mexican girls poured warm eucalyptus water and healing oils over our bodies and massaged our aching shoulders, craning necks and whirling heads.

I made it out, somehow, some way, without letting my infected foot hit the bath water that may or may not have been pre-infected from the five, or fifteen previous bathers. One-by-one we were led into the Temazcal by a highly-decorated Shaman who was ours for the keeping.

I have never been in a sauna. Nor have I ever wanted to be. I am claustrophobic and not particularly interested in sweating for sweating’s sake. But I was sure in one now. And I was sure sweating. It was a low, round, palm-fronded sweat lodge with a pit of burning rocks in the center and a bench around the edge where we sat in varying degrees of discomfort. Sir Shaman poured water on the rocks, all the while reminding us that Mother Earth controls everything. And we have no control. Especially of the heat.

Jamie was the first to externally panic. I say externally, because I panicked internally the minute I walked in. And when the Shaman wouldn’t release her, my heart pounded harder. But, Stuart held her hand and got her through. She’d been through way worse. After all, she was a Mormon. But, more on that later.

I was determined not to attempt escape. First of all, I knew I’d have to fight the Shaman to the ground and secondly, to get out, we had to duck way down and crawl out of a little low door. I still didn’t know everyone well enough to risk them witnessing me wrestle with my bend-resistant knees. And a Shaman.

Patty hung in there surprisingly well. Nicole actually seemed to enjoy herself. And Stuart, well, he was the man in the group, so he couldn’t very well crap out on us.

We chanted. We shook maracas. We screamed. One at a time. Then in unison.

And then Kelly, the youngest, the bravest, panicked. Really panicked. But the Shaman told her to breathe through it. She re-panicked. And continued to panic. He propped her up by the door, letting her sniff at the outside air like a dog begging to go out. And then, she just up and bolted.

A good half-hour later, our spirits were renounced or relinquished as the case may be, and we were finally released. We met Kelly on the other side who was now completely recovered, thanks to mystical medicinal means offered up by the Mayans.

A cold shower and a clay facial later, we were deposited in yet another bath. This time, a coconut bath. Attendants washed us with herbs and massaged our scalps, all the while wondering why the red-headed lady was dangling her left foot ever-so-slightly above the coconutted water line.

The final ritual was a massage. Covered head-to-toe in what were presumably laundered towels, we were escorted onto brightly-colored hammocks and gently rocked and rolled from above, then elbowed, kneed and kicked from below.

“Five kids?” I gasped when Jamie told us the size of her brood.

“We were Mormons,” Stuart laughed. “Of course we had five kids.”

And, as you might imagine, the conversation progressed from there.

One day, a few years ago, Stuart and Jamie woke up, looked kind of sideways at each other and said, “Hey! Here’s an idea. Let’s question our cult. Leave our religion. Live our lives!” And then, did just that. Ever since, they’ve been caffeinating and cursing, drinking and dancing, showing skin and shedding inhibitions. Just like the rest of us Present Day Saints.

Nicole, the Florida transplant from Rhode Island, courageously went on the cruise alone. She knew she’d meet a slew of other veterinary technicians onboard for continuing education credits at sea and had already Facebook met her roommate, Kelly. But still. And then to be paired up with the likes of us in Costa Maya on an adventure she never signed up for that culminated in hours and hours of circular conversation talking Mormon with the Mormons and marriage with Kelly.

Kelly, the 23 year-old with the thigh-sized tattoo and the finger-sized holes in her ears. Kelly, who I betrothed to my youngest son in a text.

“Will you marry Kelly?” I typed mid-Margarita. Without typos, I might add. “She is SO not your type but I love her so much. She’s such a good and genuine person.”

To which he responded, “Bring her back with you. I shall marry her.”

Nothing that afternoon, and I mean nothing, was taboo.

There’s not much I don’t love about this life I live. But one of the things that brings me the very most joy is when I discover unexpected treasures in unexpected people. When I come across humans who are unfiltered and unafraid to answer off-colored questions. Who aren’t afraid to expose their imperfections and immoralities. Who share their sagas and bare their souls knowing that they’ve found a kindred spirit who will embrace them and celebrate them, despite coming from a completely different world.

Perhaps it was sharing the bizarrest of bizarre experiences. Perhaps it was breathing in the sea air or drinking from the salt-rimmed margaritas, or feeling that Caribbean sun beat down on our backs that kept us one-upping each another with the bizarrieties of our real lives. But, perhaps, we bonded simply because when all was said and drunk, we came to realize that our completely different worlds really aren’t so completely different at all.