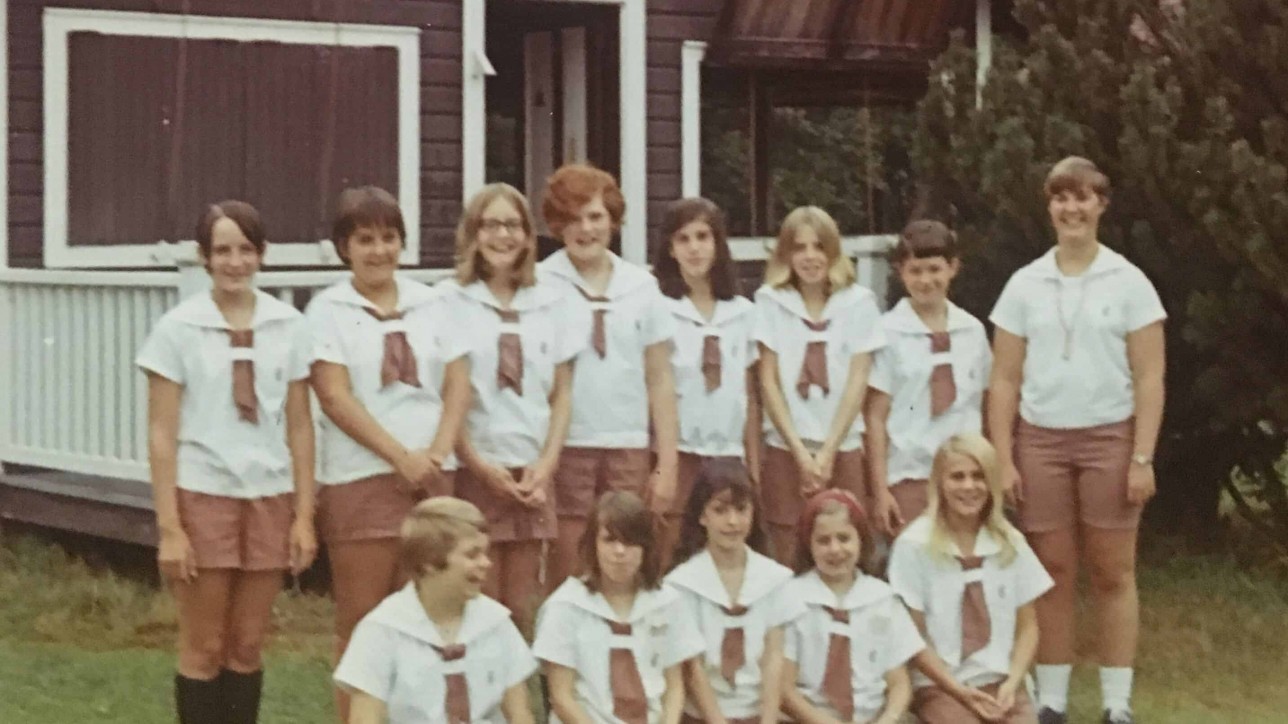 The daughter spent her early years clinging to the back of my legs like a leech in a Pocono pond. And while I loved her dearly, shaking her loose at Mommy and Me classes and swim lessons and birthday parties at Chuck E. Cheese was getting increasingly difficult, not to mention tiresome. I would not, could not, and Lord knows, should not, raise a child who lived in my shadow.

So, I sent her away.

The summer of her seventh year, the daughter joined her cousins, Olivia and Harley, at Victory Valley, a sleep-away camp in the bowels of Pennsylvania. It was dirt cheap, an easy drive and most importantly, allowed her to be in the same cabin with Olivia, who was a year-and-a-half older.

The fastest week in history later, families were ushered into Victory Hall for the campers’ grand finale. After hearing all about all the wheelbarrow races, scavenger hunts and nature hikes, my sister and I swelled with parental pride and dreamed about sending them for two, or three, or four weeks the following summer.

“Would all campers who have accepted Jesus Christ as their savior, please come forward to be saved.”

My sister and I nudged each other, holding our collective breaths. Our daughters remained stoically in their seats, but Harley surprised us all by barreling down the aisle for the final save of the day.

Now, having spent every Sunday in the front pew, poking and prodding and singing Onward Christian Soldiers, my sister and I were both interested in raising faith-filled children. But our idea of religion was, and is, worlds away from a bible boot camp that dangles Jesus as a chocolate carrot.

But, it was cheap. And, besides, camp builds character.

When my middle child was thirteen, I sent him off to a sleep-away camp in Casco, Maine. My sister’s (another sister) friend had recently renounced his job in corporate America to resurrect a camp that had lain dormant for two decades. Camp Netop was where all the cool guys had gone when we were growing up, and now Steve was bringing it back to life. Always eager to market my kids as cool, I enrolled Max for a two-week stint that inaugural season. Now, Max may be the most social of my children, but he is also the least likely to enjoy roughing it. But, I didn’t care. I was used to sacrificing my offspring to benefit others. So, we hopped in the Old Minivan and took the six-hour trek north.

Camp Netop was pretty bare-bones that first year with an enrollment of just a few dozen boys spanning various ages. “This will be great!” I effused. “You’ll know every single person here!” But, after depositing him in a platform tent, bath house elsewhere, on a cot next to a nerdy boy strumming on a guitar, and backed away backed away slowly, I knew from the look in his eyes, this was the cruelest thing I had ever done to my jock of a son.

As it ended up, Max adapted. He even won some sort of award for being some sort of camper of some sort of caliber that I have long since forgotten. Of his own volition, he returned the following year. And, the painted totem pole award is still sitting on his desk, twelve years later.

Leo, the youngest was sent away when he was six. This was another church-based camp, but way more mainstream and way less churchy. We dragged Leo’s best friend, Koree, along because neither one of them would ever have considered going alone. And, both of them flat-out refused to ever, ever go back to any camp, ever, after they were forced to partake in the polar bear swim at the crack of dawn.

My three sisters and I spent several of our childhood summers at Camp Hagan in Shawnee-on-Delaware in Pennsylvania. We wore little tan shorts and stiff white cotton tops, took swim lessons in the river, went on day trips to Bushkill Falls, sang “We’re Hagan born, we’re Hagan bred and when we die we’ll be Hagan dead,” around the campfire, heard scary stories about the Big Black Rock, purchased candy bars with pre-paid tickets from the canteen after supper, and on July 20, 1969, gathered in the dining hall around a black and white television to witness one giant leap for mankind.

“I hated that camp,” sister Susan announced half a century later.

“Me, too,” another sister claimed.

“YOU chose to go back for one more year after the rest of stopped going!” sister Susan reminded me. “You didn’t hate it.”

But, love it or hate it, camp clearly builds character. Why else would I remember 50 years later, being blasted awake by a recorded rendition of Reveille every morning? Or being forced to complete daily chores that more often than not included cleaning latrines? Getting chewed alive by mosquitos at dusk, drinking distasteful “bug juice” to wash down unidentifiably distasteful food, being forced to partake in team-bonding (before it was a verb) activities like Christmas in July and Camp Olympics? Preparing for cabin inspections, stubbing toes, sleeping in perpetually damp sheets and being way too proud to submit to homesickness?

I remember being jealous of Marty Conboy’s high cheekbones, Pint’s cute nickname and Jody and Jennifer’s close friendship. And to this day, I wonder if eight-year-old Molly Levine was right – that I did have uncommonly tiny lips as well as uncommon and thus despised, frizzy red hair.

There is no doubt that I am a woman of character. Character strong enough to admit that sending my children to sleep-away camp had absolutely nothing to do with building character.