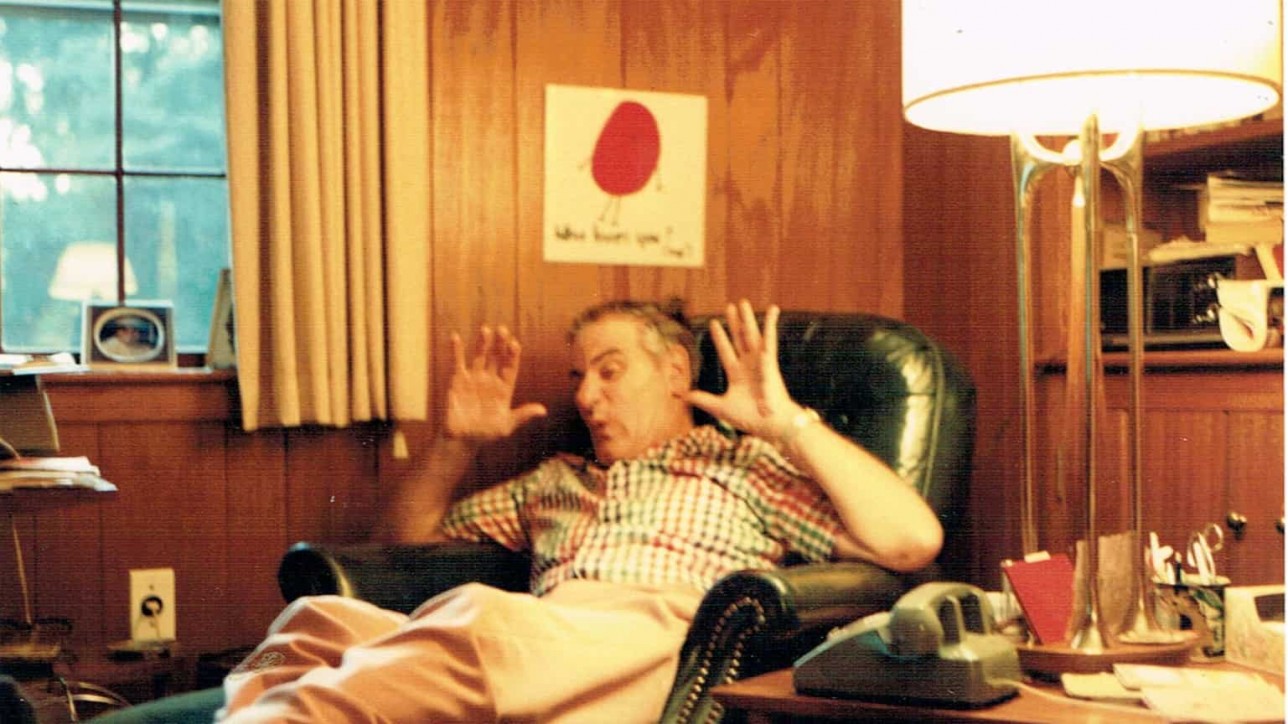 “It was like being on a constant cringe alert, wondering what in the world might come out of his mouth next,” I said to my spouse-to-be, early in our courtship. “That’s what it was like growing up with my father. Can you imagine?”

But he married me anyway.

My father was inappropriate, politically incorrect and firmly believed that his way was the right way, especially if it had to do with raking leaves, saving money or driving a car.

But he was also full of fun and mischief and a whole lot of love.

He loved my mother completely, though that’s not really saying much as there is nothing not to love about my mother. She was a perfect wife. But maybe that’s because she thought he was a perfect husband. Even if he made her cringe.

And he loved his children.

My father was a man’s man. A football captain. A basketball player. A baseball star. He was one of those men who was equally proficient in building a house as in building an ALPO dog food empire, both of which were key components of our cushy lives.

He didn’t get a single son. He got four stinkin’ daughters, one after another. But, he did the best he could with what he got. He coached Oreland Girls’ Softball for years and never hesitated to give one of his daughters the MVP award when we deserved it, or to take us out for long and tedious batting practice or pitching lessons when we didn’t. He taught us all to play golf, to lick ice cream cones properly and that bathroom talk was never taboo. Not even at the dinner table.

Every time we went to a restaurant, and I do mean every time, my father would try to pawn us off.

“Which one of the girls would you like to marry?” he’d ask handsome waiters as we squirmed in our chairs.

He’d also had a habit of praising our accomplishments in a somewhat exaggerated manner.

“This is my daughter Nancy, she’s the president of Eagle’s Eye,” which was a clothing company where she worked at a level far from the top. Or, “Betsy’s a famous advertising writer. She makes $50 an hour,” back when $50 an hour was more than I could ever imagine making.

He bought us Yum Yum, an ice cream store in Flourtown, when we were in high school. We all worked there and got paid the same $1 an hour (plus tips)  as everyone else. But when all was said and done and Friendly’s bought us out, he handed each of his daughters a bank book in which he had doubled our wages.

My father went to Dartmouth College and took a hiatus to serve in the Navy. He was a war hero who was shot down in the Pacific but luckily lived to tell the tale. He was a brutally honest, morally rigid, fun-loving fellow who never cursed except for that one time when he dropped a bowling ball on his foot. He loved to travel, loved to play golf and loved to watch the Phillies from his green leather chair in the den.

My father was a larger-than-life kind of guy. He loved entertaining people with his stories. He loved making people laugh. And he loved helping the underdog.

Whether it was a golf caddy, an aging waitress or the worst softball player on the team, he had a way of making them feel special.

Like, my sister Emily, who to this day still believes she was the favorite.

But I know that can’t possibly be true.

Because, I was clearly the favorite. My father lovingly called me The Director because surprisingly, even back then, I had to orchestrate everything. He used to tell me that my mouth would get me in trouble one day. But in the same breath brag that I was just like him. He even wrote me a poem:

But he was a father who was always present, always cherished and always putting his family first.

And no matter how many years he’s been gone, he’ll always be in my heart. In my soul. And in my big mouth.

So, friends and family, I do apologize.

I’m sorry that the rest of your days with me will be filled with cringe-worth moments.

Yet, I can’t help but thinking there’s a whole lot worse things I could have become than my father’s daughter.