Ringing Out the Old 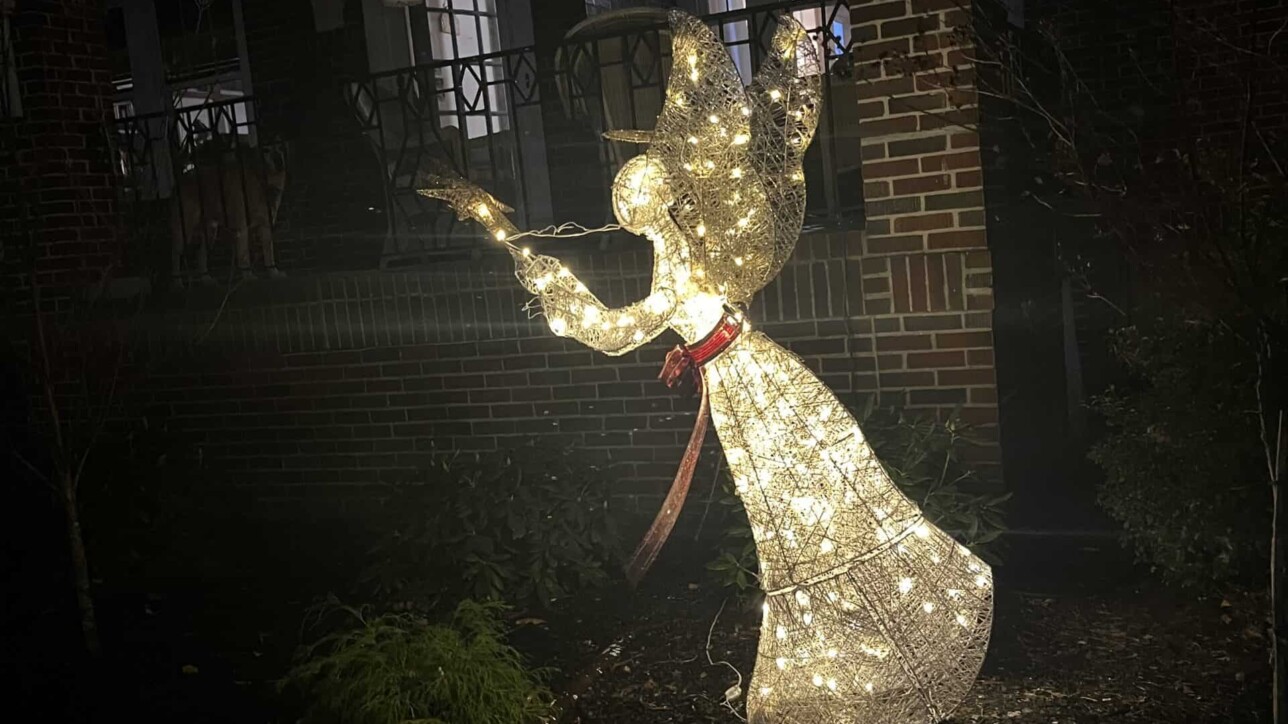 To celebrate the life of my friend Lou’s mother, Margo, I downed two shots of tequila (yes, I really did) with the Pinto family after her funeral on Thursday. Because her last years on earth did not mirror the feisty, successful and hard-working woman she truly was, we got to talking about how, often times, the whole is greater than the sum of its parts. Especially when considering one’s long-lived life.

Which is exactly how I came to feel about ringing out 2021, alone in the living room, glued to the 19-inch TV, playing Words with Friends with one eye, watching Anderson Cooper with the other. Because I never drink alone and my offspring and spouse had long since retired for the night, I was able to fully focus on the fact that these newscasters actually drink real alcohol and get tipsy while live on air. Being in full control of my own faculties and feeling a bit reflective, I pulled out my Moleskin weekly planner in which I had recorded the highs, lows and inconsequential nonsense of the rapidly waning year.

I noted that I finished Designated Survivor on January 2nd but admittedly had to google and read the synopsis before I had any recollection of the series that I had binged and apparently loved – hence the !!! after the entry. I changed the Brita filter on January 4th, recalibrated my psoriatic arthritis medicine on the 12th, socialized with my mother for the first time indoors (with masks) on the 20th, attended multiple zoom meetings throughout the month and had the dishwasher repaired on the 29th.

I shoveled snow in February, got my COVID vaccines, and visited with my mother indoors and unmasked. The middle kid moved back home after living in Los Angeles for several years and I had a not-yet-authorized, but certainly not illegal, vaccine appointment waiting for him upon his return.

Early March was spent on the computer from midnight through 2 am, refreshing my browser over and over again to secure vaccine appointments for friends and family so we could all go to the Woolley wedding in April. I bought a new laptop, went to an indoor bridal shower and put the dog food on an automatic delivery plan.

In April, I vacuumed my car and got an oil change, met my niece’s boyfriend for the first time at a restaurant indoors in Pennsylvania. Heather revealed she was having a baby girl and we cheered with glee in her parent’s backyard on Easter Sunday. I played mahjong with Susan and Janice and had lunch with Ann and Gail. We went to Jan and John’s wedding where we ate and danced and drank and rejoiced. Vaccinated and unmasked. We attended Holly and Jim’s annual Oscar Awards party via Zoom.

In May we went to our first Mets game in two years. We sat socially distanced in fifth row seats, breaking the rules and lowering masks as we joined the other reduced capacity fans in applauding the return of Matt Harvey, who blessedly didn’t pitch all that well as an Oriole either. I got on an airplane for the first time in 14 months and flew to Charleston where my sister and her new dog Birdie lived in an alternate reality. No masks in stores, no worry in restaurants, no cringing when strangers got too close.

By June, masks were no longer required in the gym, the youngest child left without fear for a summer of work on a food truck in Traverse City and I went to an indoor, but masked funeral for my dear friend Angela’s mother. The daughter continued to come and go from Brooklyn, but much less frequently now that her social world was opening back up. The ever-loving spouse and I went to more Mets games and got closer and closer to other fans. I went to the Bonefish Grill and ate inside with Susan and Janice and drove to Higgins Beach, Maine the following day for the annual college girls’ trip. We shopped for mattresses in Portland and had cocktails and dinner. Indoors. Unmasked. I went to Pennsylvania for a luncheon where I met cousins from California who I barely knew I had, but with whom have since become fast Facebook friends.

In July we had dinner at Outback, after too many years away from our old stomping grounds where we once went to celebrate every everything with the Hargraves family. At long last I met Niel, Kris’s girlfriend who has since and slyly become his bride. The next day I went to visit my high school bestie, Madge, at her new house near Harrisburg. Our great friend, Nancy, came from DC for a mid-month visit and we went masked to the Van Gogh exhibit in NYC, then unmasked to Emilio’s Ballato where the likes of the Obamas have been known to dine. We ended the month by resuming our annual Woolley weekend with fun in the sun at their Lancaster “estate” along with our fun friend Carrie and my sister Emily.

On the 1st of August we met the daughter in Manhattan for a farewell supper for the middle kid who was returning to Los Angeles after a six-month stint working remotely from his childhood bedroom in New Jersey.  Three days later the ever-loving and I boarded a plane for a six-day trip to Denver where we celebrated Lauren and Rob’s wedding with our UNC friends, aka family. We went to the Rockies’ game, climbed around Red Rocks, had many drinks and many meals and had a great visit with my college friend, Jill, and her husband, David. Upon our return, the daughter and I went to Samantha’s baby shower on a rainy Sunday afternoon and renewed our friendship vows with friends from the good old cheerleading days.

Late August is when things took a turn. A group of us who had all grown up together were going to Seattle for Mark and Emily’s wedding – Mark being the son of our lifelong friend Kit. But while making our final plans, grumblings of something called a Delta variant had begun and COVID talk that had been all but tabled made a comeback. Would the wedding, already postponed a year, even happen?  Should we get tested before going? But even if we tested negative, we could get “it” on the plane.  Would we be safe or sorry if we shared a rental car with an unvaccinated friend? Would fear cancel our fun? Of course we went and of course there was abundance of fun, but masks were mandated. Both indoors and out.

In early September I see that I got a COVID test, probably because I had the phantom symptoms I tend to feel when certain friends gasp in horror after I’ve rolled the risk versus reward dice. But I wanted to meet Ian’s baby girl, Hana, and had to be sure I wasn’t bringing her any unwelcome gifts.  We went to more Mets games and witnessed their all-to-familiar demise. Zoom meetings and church services and book clubs went hybrid with half in person, half masked at home.

October was when Madge, Rachel and I met at Debbie’s house in Telford, PA. We were high school buddies and hadn’t all been together, other than on Zoom, in way too many years. Our friend Patty had died in 2020 and we spent the afternoon sharing stories while marveling at much we’ve changed and how much we’ve stayed the same. The ever-loving and I drove to Baltimore to an outdoor retirement party for his childhood friend, Charlie, and then ventured onward, down to DC, for a colleague’s party where I befriended my MSNBC idol, Kimberly Atkins. We had brunch the next day at an Afghan restaurant in Adams Morgan with our friend Nancy.

The college girls gathered in Greenville, SC in the middle of the month and we were all quite impressed by the beautiful, walkable, mask-free city that our friend Ann now called home. The following week my spouse, youngest son and I met my sister-in-law and her significant other in Baltimore for the internment of my father-in-law’s ashes, finally laying him to rest next to his bride of over 50 years. In October I had lunch indoors with Ann and Gail.

In early November I met baby Savannah and coordinated the visit so I’d also get to see Heather’s mother who, as one of my very best friends, I had ridiculously not seen since the gender reveal on Easter Sunday. I met Samantha’s baby girl, Demi, and as a bonus, got to see Demi’s grandmother Dawn again, a fun-filled friend who had defected to Florida. We celebrated our 32nd anniversary in tandem with Diwali, setting off fireworks with our friends and neighbors on Grove Street. We went to Boston for a weekend with the ever-loving’s college cronies where I made new pals and cemented friendships with others. Masks were back in vogue in public places, though at the time we assumed it was only because Massachusetts trends socially progressive. We resumed our night-before party at the Schaeffer’s and had a big family Thanksgiving at my sister’s house in Pennsylvania.

We kicked off the Christmas season with John and Janice at an indoor restaurant without a contrary thought in our heads. The following week Kathy had Ann, Holly and me over for a lovely holiday luncheon where some, but not all, of our conversation skewed toward this thing called Omicron. Talk turned to the approaching invasion of friends and family and at-home tests and whether gatherings were too risky despite our multiple jabs. Yet the spouse and I went to a dinner party over the weekend and the next day to the Christmas pageant at church. That afternoon I went to Gretchen’s cookie exchange party in Pennsylvania and stole several bags of her homemade toffee to eat on the way home.

The daughter came home from Brooklyn. The middle one came home from California. Both were  subsequently and separately informed that they had been directly exposed to COVID. They stood in four-hours long lines to get their negative test results. Our church went virtual again starting on Christmas Eve. I strongly discouraged the middle one from attending the Knicks game on Christmas Day, and he listened to me. Our sewer line backed up on Christmas night and we spent a good deal of time bailing water out of the basement. We took home tests before celebrating at my sister’s on the 26th following ad nauseam debates over whether it was safe for us all to gather with my 96 year-old mother.

We went back and forth about New Year’s Eve and whether we should go to a restaurant with Jean and Tom or not. Not is what won for the second New Year’s Eve in a row. Which brings me back to the living room, alone in front of the 19-inch TV watching Anderson Cooper giggle and Miley Cyrus twerk, Moleskin planner in tow to help me relive 2021. I recorded that I walked 636.27 miles this year (as intentional exercise – not every day stepping out). I only bicycled half of what I usually do at 581 miles. (Meanwhile, the spouse clocked over 3,000 miles this year). I went to the gym 103 times. I lost ten pounds and gained five back — this week alone. I read 57 books but uncharacteristically lost count of my Netflix binges.

Like everyone else, as the new year approached I was more than ready to ring out the old. Yet when I looked at 2021 as a whole rather than just the sum of its parts, I can say without reservation that it was a year worth living. And certainly one worth remembering.

So, here’s to 2022. May health be your constant companion. Happiness your eternal default. And friends and family your abiding umbrella. Just keep hope in your heart and joy in your soul and we’ll all get through these darkest and strangest of days.

Or years, as the case may be.