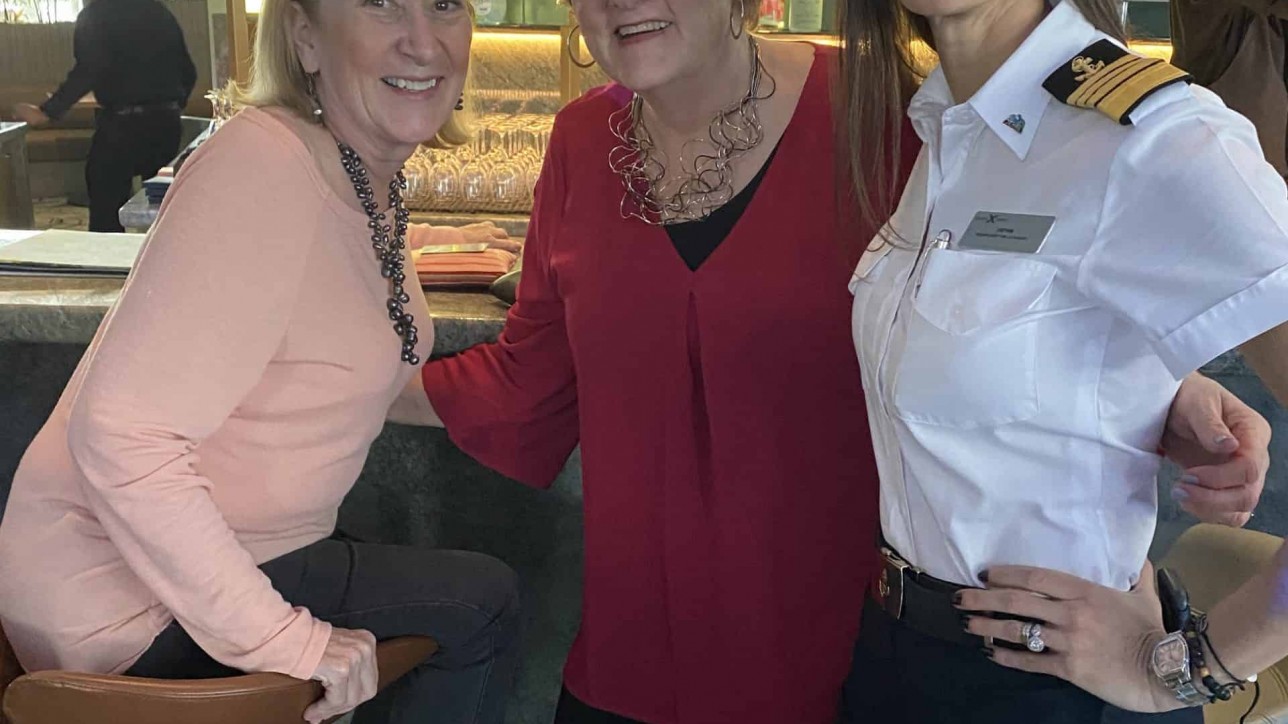 I’m not sure when I caught the guilt virus. But, I’m suspecting it was when I went to a wedding in my early 20s and blatantly defied the priest by taking communion as a non-Catholic. The act itself caused me no remorse, but when the couple divorced a few years later, I couldn’t help but wonder if it was all my fault.

I question everything I do and take blame, never credit, for the way things turn out. But, I am admittedly somewhat selfish when it comes to my own personal comforts and pleasures.

Which, is why I decided last week to forge ahead and go on my annual cruise with Patty, my bosom buddy and partner in crime.

Patty has catastrophic anxiety. She worries about hurricanes, aging mothers, dogs in kennels, and icebergs. I have personal comfort anxiety. I worry about my hair frizzing, room temperatures, popping buttons, and my extra cup of ice. So, I figured I’d be the one calming her qualms when it came to our annual Caribbean cruise aboard the long-awaited, super-hyped, billion-dollar Celebrity Edge. The Caribbean cruise that was celebrating International Women’s Day with an all-female bridge and officer team. The Caribbean cruise with Captain Kate McCue, the first American female cruise ship captain, at the helm. I mean, how could we NOT go?

When I left for Florida just eleven days ago, the Coronavirus was real, but still far enough removed that there wasn’t a definitive right or wrong. Besides, I’m “young” and healthy. There were no refunds being offered for frightened cruisers and as someone who hasn’t had so much as a common cold in the past seven years, I was one of those, “so what if I get the flu?” people.

My ever-loving, non-alarmist spouse thought it was a bad idea to go, a very bad idea.

So, after elbow-bumping him goodbye at the airport, I experienced a wave of serious guilt. In response, I did what I always do – I began verbally processing, asking every third person in the airport if I was crazy. When the skycap let me slide with an overweight 52.8 pound suitcase (extra Spanx in case we were quarantined at sea) and I asked if he would go on a cruise if he were me, he simply shrugged his shoulders and handed me my boarding pass. Along with a Deeper Life Bible Church pamphlet entitled, “Only One Life.” A message I chose to interpret as, “Go For It.”

Though I appeared outwardly confident, my insides were shaking, not sure that all the bourbon on the boat could keep the virus at bay.

“Is it safe?” I asked Marion, the Celebrity Cruise employee at our second point of entry, the first point of entry being our temperature check.

“You didn’t look me in the eye when you said that!” I quipped back at her.

She laughed and looked me full in the face and assured me that we’d be fine.

I soon learned she was an ex-Jersey girl herself and that she had family members in both the media and the healthcare industries. Because, of course, I can’t just say “thank you,” and move on. I need backstories.

As she ushered us onward, she unpinned a little purple ribbon (in honor of International Women’s Day) from her chest and handed it to me.

“We’re supposed to give this to a passenger who makes a big impression on us,” she explained.

“Oh, like the first impression rose on The Bachelor!” I said, immediately launching into Peter the Pilot’s idiocy.

At the next point of entry, Patty received her purple ribbon from Tina, a woman full of genuine glee, or perhaps, just good at faking it. Patty’s ribbon was bestowed upon her simply for putting up with me.

And, then we walked the gangplank. There was no turning back.

“If I don’t make it home, know that I will have died doing something I love,” I sent in the family group text half-way through my first umbrella drink. “And if I do die, know that it in no way negates how much I love all of you.”

Spoiler alert. I made it home unscathed.

But, not without having to navigate some pretty choppy waters.

With public relations being ultra-important in a crisis, we couldn’t get a straight answer on how many were on board, though common consent was that it was about 2/3rds full. Our perception of those projected stats shilly-shallied from being proud to be amongst 2,000 people brave enough to not back out, to being embarrassed to be amongst 2,000 people too stupid not to back out.

But, regardless of the conditions, on a cruise ship, the show must go on. And, so it did.

Friends were emailing like mad, sending news stories and speculations and concern. Each and every one of them signed with the unspoken, “You are absolutely crazy to have gone on that cruise.”

Call it luck. Call it fate. Call it Captain Kate. But, our ship didn’t have a single passenger or a single crew member with a single symptom. And even after we knew that no ships would be sailing for a long, long time, the crew never stopped smiling, even though their futures were so uncertain. Where would they go? What would they do? How could they survive financially? As it turned out, the ship is anchored somewhere out there and the crew remains, with pay, on board. And Captain Kate, bless her soul, announced just yesterday that while in limbo, the 1,300 crew members would get to cruise like guests, moving from below deck to balcony staterooms.

Though I have no doubt that Captain Kate was holding her breath through every rogue wave and breaking news story last week, her sense of calm and sense of humor made for smooth sailing for both cast and crew.

I wouldn’t have traded that trip for a thousand medical masks.

When random people are thrown together in crisis, confusion, or downright chaos, they are always rewarded with a life-long bond. Together, as new friends, we weathered the storm, all the while knowing we had our own new realities and worries waiting at home. Wayne and Brian unsure of their immediate futures, both in different branches of the travel industry. Bob and Sharon thinking about their daughter and three grandchildren in Seattle; their son-in-law, a medical professional in the epicenter of the pandemic. Don wondering if he’d get clearance to go back to work or if his two little Fidos would be his sole companions for weeks on end. Patty lamenting not being able to visit her 92 year-old mother in her senior living residence. Kit knowing her family trip to Las Vegas was canceled; her son away at a college not yet closed. Chris and Les realizing they’ll be sniping at each other as they work from home for God knows how long, but knowing they have stockpiles of hand sanitizer. And plenty of new colorful bowls and spoons. And, though I can’t see my 94 year-old mother or my California kid for awhile, and have only seen the daughter on FaceTime, get to spend all my days and nights with my youngest kid, the dang dog who’s never gotten more walks in his life, and my ever-loving journalist of a spouse who keeps me informed of all things Corona.

And when it all came to an end, we broke the rules. After all that we’d shared – the angst, the alcohol, the calories, the conversation, the fear, the fun, our hopes, our hearts – we hugged each other tight.

And then we washed our hands and came home.