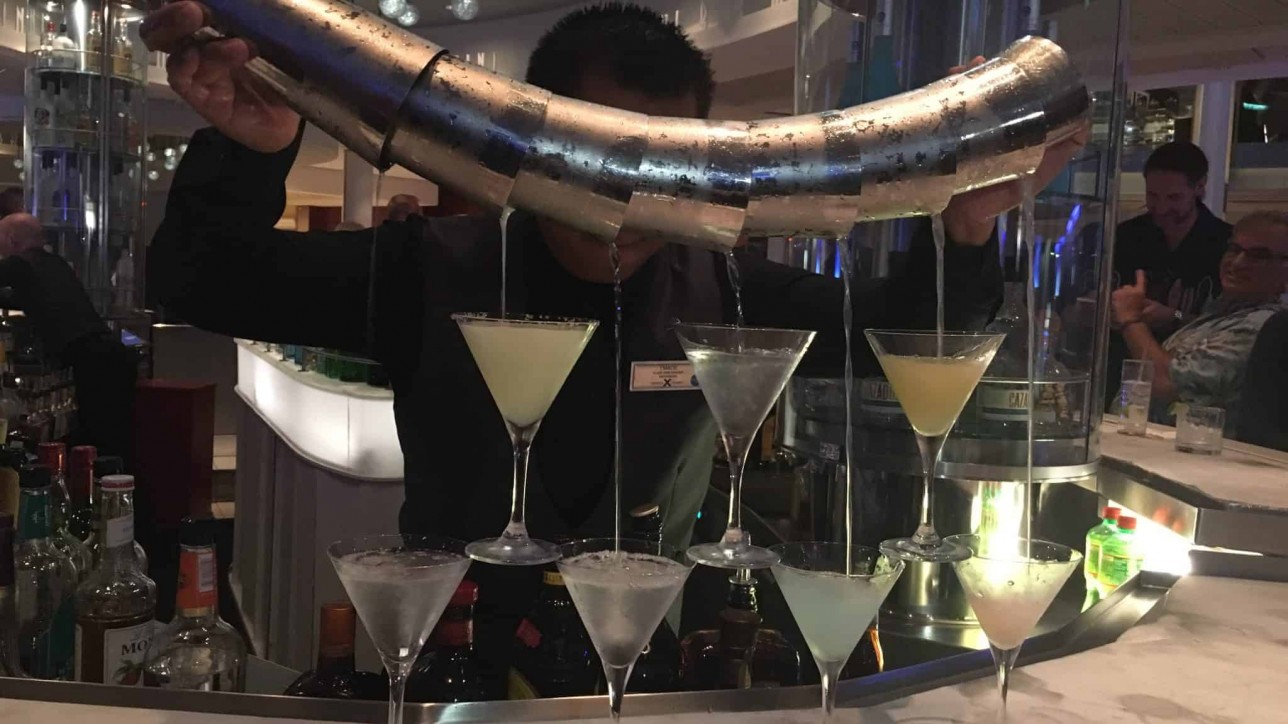 “So, how was the cruise?” my friend, Susan, asked at church on Sunday, shortly after I had completed prayers for redemption.

“Stupid. It was just stupid,” I said. “It was one big gluttonous overindulgence.”

Of course I had fun. Stupid fun.

I love gluttony probably thrice as much as the other 2,849 other passengers onboard. I love eating six pieces of bread per meal and being served chocolate bonbons after dessert to top off the chocolate mousse cake. I love being encouraged to order two appetizers rather than choosing between truffled risotto and shrimp cocktail. I love eating filet mignon every night with extra béarnaise sauce and feeling only the mildest guilt because, after all, I had my FitBit on. I love traveling with someone whose only judgment of my alcohol consumption is that I don’t start the day with a Mimosa.

In real life, I rarely have a 23,000 calorie-per-day feeding frenzy, rather am constantly conscious of what I consume. In real life, I may talk a good game, but the unlimited drink package I’m most interested in starts and ends with Diet Coke. In real life, I am an excessive exerciser, so rigid that I keep detailed records of my daily weight and workouts.

Not, of course, that any of it makes much of a difference. The amount of damage I do on an annual week-long cruise takes the other 51 weeks to undo.

But, while gluttonous consumption certainly plays its part in enhancing conversation, it’s mixology of a different sort that leaves me ever-yearning for the next adventure with my high school gal pal, Patty.

It’s the mixology of people. The mixing and mingling of unrelated strangers. Of different backgrounds. Different views. Different reasons for being where we were and with whom. The joy of learning a little something from everyone we meet. And, in turn, leaving better, if not bigger, people than we were when we boarded the ship.

The ships on which we sequester ourselves are the size of small cities, filled with thousands of people we can’t escape. The drooling man with the bandaided forehead. The proud Philadelphia couple in their Super Bowl shirts. The stalker from two doors down. The man with the NRA baseball cap.

Those were our Canadian friends, Gail and Linda, free-spirits who we met as we sailed into the sunset on our very first night. Beverly and Jim, celebrating their 33rd cruise for their 33rd anniversary. Dale and Pat, two girls at least 15 years our senior, who joined us on a pub crawl in Key West, one with a cane, one with a hangover. Glen, the golf pro and Nora, the nurse who assured me I would not die from my infected foot. Mitch, onboard for an onboard wedding, who would have befriended Patty in a heartbeat. In the biblical sense. Had we only allowed it.

Those were Kristy and Mike, long-time office mates, turned life-long mates. Jennifer and Russ, fun-loving friends who we met much too late. Beth and John, classmates from high school (two towns away from where we grew up), who went off, married other people, dumped those spouses, reconnected on Facebook and lived happily ever after.

Those were the Mormons, Jamie and Stuart; the vet tech, Nicole; and Kelly, my future daughter-in-law with whom we bonded over hot coals, cold drinks, stingrays and spiritual healing. But that, my friends, is another story for another day.

Those were Catherine and David, dry and witty and clearly the smartest people on the ship. The ones who took their jobs and shoved them. Into a BBQ pit. They built an empire out of a hobby through Adrenaline Barbecue Company and now have both the meat and the means to leave their boys with Grandma and spend a week swapping stories and sipping bourbons with the likes of us.

And those were Linda and John. The kindest people on the face of the sea. Of course, they did visit the onboard priest every morning, undoubtedly praying for our sorry souls and for the strength to make it through yet another dinner with us. Because, while it may come as somewhat of a surprise, when Patty and I entered the dining room, everyone knew it. And that’s not easy for people who are more refined at their worst than we will ever be at our best. We met their four daughters and six-and-a-half grandchildren vicariously, learning as much about each other’s families as we dared to admit. John is the cook. Linda, the excel sheet maker. John keeps up with technology. Linda still has a dumb phone. They have their marriage down pat and their priorities in the right place. But, despite the perfection they project, they still welcomed the imperfections of the two crazy girls who were way too old to be acting as crazy as they were.

Those were the people who we serendipitously met who will pop into our hearts and minds a zillion times over the course of the rest of our lives. I’ll think of Dave when I break down and buy my spouse a new Weber grill for Father’s Day and Catherine next time I’m in Chapel Hill. I’ll think of Linda and John when my first grandchild is born and of Liz and Jeff next time I’m slumped in a doorway. I’ll think of Jamie and Stuart when Mitt Romney gets elected and of Gail and Linda when my son hands me a book on Buddhism. I’ll think of Beth and John the next time I pass through Bucks County and of Nora when my foot finally heals. I’ll think of Nicole when my dog gets sick and of Kelly when Leo walks down the aisle with a flat-chested bride.

As surely as the tides continue to turn, our lives, too, will evolve in a multitude of different directions.  And as they do, I will hold all those gluttonous partners-in-crime in my heart, forever thankful that random strangers can become fast friends.

If only for a week of stupid fun at sea.