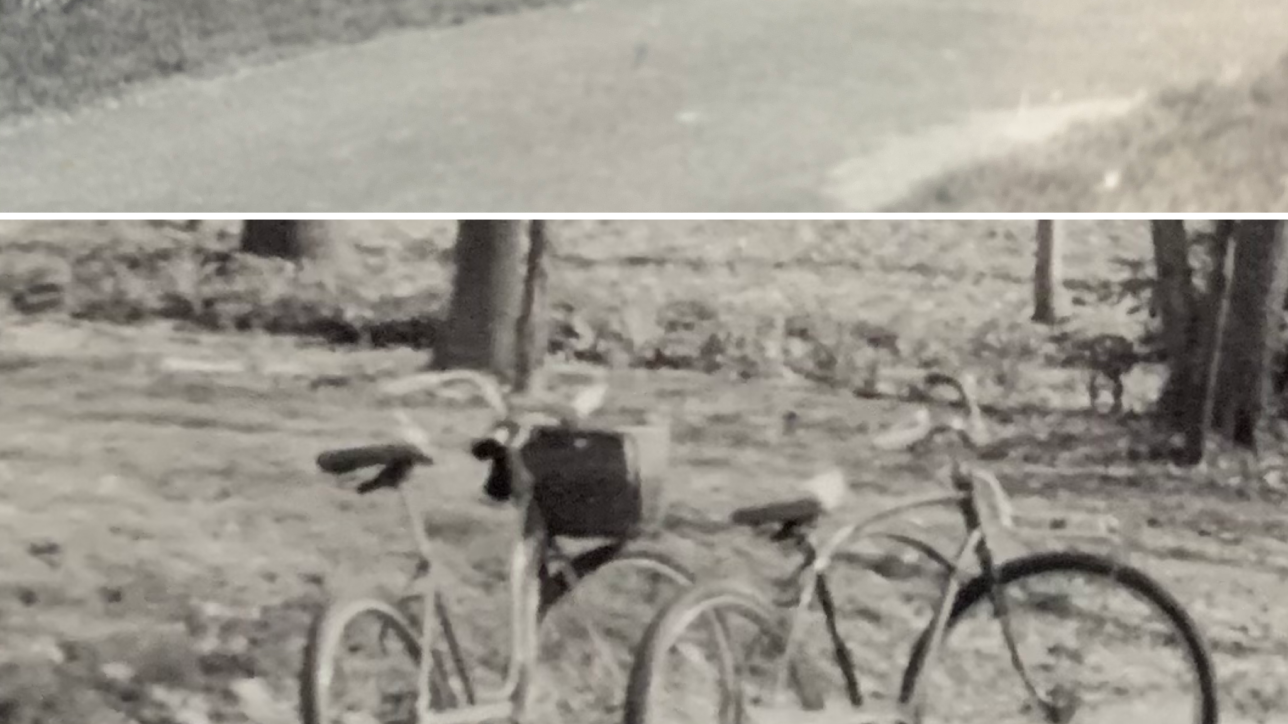 I’ve changed the names and some defining details to avoid unintended humiliations, forced retractions and potential lawsuits. My hope is that I’ve captured the essence of a childhood grounded in a much less complicated world and that you’ll see yourself, or your ancestors, in this storyteller’s stories.

One day, long after the metal trash can incident and long after your mother’s cut had healed, she once again attempted the no-pedal, no-brakes ride to Bo-Betsy’s house. She got on her blue Schwinn bicycle and pushed off from the top of her steep driveway. Down she went, fast, fast, faster, turning right at the street, soaring past one house, then another, until she got to the third house where Bo-Betsy lived. This time she was able to make it all the way up to the tip-top of Bo-Betsy’s driveway without pedaling. Without using the brakes. Without falling off. And without a single second of doubt. Because your mother had taken to heart the poster hanging in the principal’s office at Enfield Elementary school: If once you don’t succeed, try, try again. Another one of your mother’s favorite sayings was prominently displayed in her kitchen at 308 Woods Road: Live everyday as though it’s your last. And someday you’ll be right. But that one doesn’t have a lot to do with this particular story.

Bo-Betsy was watching from her front lawn and screamed, “Bravo!” even though she knew that what your mother had done was very dangerous. After all, she had the scar to prove it. But Bo-Betsy loved when your mother did courageous things. Mostly because she was afraid to do them herself.

On this sunny afternoon in the middle of summer, your mother and Bo-Betsy couldn’t decide what to do. So they just started riding their bicycles around and around in circles on the driveway.

Here’s just a little background for you. Bo-Betsy, along with her two older sisters, one younger sister, mother, father, and their polka-dotted dog, Pongo, moved to Woods Road the month before she turned five years old. Mr. Hunsicker (remember, that’s Bo-Betsy’s father) bought the last empty plot of land on the street. Because he had been a builder before he started selling ALPO dog food, he was very excited to be able to oversee the construction of his dream house and to make sure the must-haves on his list came to fruition.

Mr. Hunsicker was a very smart man. He knew that while the oldest of his four girls was only seven and the youngest about to turn three, that the years would start going by faster and faster, so fast that in a blink of an eye, there would be six drivers in the family. And while Mr. Hunsicker was a very smart man, he was not the most patient man, and had no interest in juggling cars in order to get to work in the morning. Not then. Not ever. He knew it would behoove them all to have a driveway big enough to fit all the Ford Pintos and Chevy Chevettes of their future.

And so he added to his must-have list, an attached two-car garage for his yellow Ford Falcon and for Mrs. Hunsicker’s wood-paneled station wagon. At the last minute he had a bonus room built to the side of the garage for his workbench and his tools and all the bicycles and rakes and shovels. That side room is also where Tiny Tim and Albert lived, for the short time that they did.

When you drove up, or walked up, or bicycled up the Hunsicker’s driveway, you’d have to turn slightly to the right to angle your way into the garage. The garage had a very big and heavy door that rolled up into the ceiling. Whenever the family came home from an outing, Bo-Betsy’s father would tell one of the girls to hop out of the car and open the garage door. Back then, a remote-control garage door was as foreign a concept as a remote-control TV. It was both an honor and a burden to be the designated daughter.

To the left of the roll-up garage door was a flat wall behind which was the side room that contained the miscellaneous mess. This flat wall was big enough for a basketball hoop and strong enough to survive the many tennis balls slammed against it. It also meant that the driveway, which came right up to the corner of the wall, was big enough to park a party’s-worth of cars. Which meant it was big enough to play a game of pepper with the softball and big enough to ride bicycles on – up and down and around and around.  The only other driveway on Woods Road anywhere near that big was the Baker’s. Everything about the Baker’s was big. They were very, very rich.

But the Bakers have nothing to do with this story, so let’s get back to the girls and their bicycles. Around and around and around they rode, your mother and Bo-Betsy, evenly spaced, evenly paced, like show horses in a ring. Just when they were beginning to get dizzy, not to mention bored, up the driveway pedaled another girl from the neighborhood.

Her name was Kit. Kit and her brother, Johnny, lived way at the top of the hill on Woods Road. Kit had a gold bicycle with a white seat, with red and green and yellow and blue streamers coming out of the handlebars. Sometimes she would braid the streamers together.

As previously mentioned, Bo-Betsy had a dog named Pongo. In those days, dogs ran free. They didn’t have to be on leashes or behind fences or kept indoors. They roamed the neighborhood and lived a much freer life than kids and dogs live today – which also meant they had much more fun. Pongo was a Dalmatian. He was white with black and white spots, just like the dogs in the movie 101 Dalmatians. He was a very nice dog. Until he bit Walter Wilson. But it wasn’t really his fault. Plus that’s a story for another time.

Pongo ran around and barked as Kit came puffing up the driveway, but he soon lost interest and went back to chewing crab grass. Kit hopped off her bike, put the kickstand down and planted her feet wide apart with her hands on her hips. Kit was the smartest girl in the neighborhood. Smarter even than Bo-Betsy’s oldest sister, Susan. Though later in life, when they were much, much older and your mother, Kit, and Emily (that’s Bo-Betsy’s sister), shared an apartment in West Philadelphia, your mother sometimes wondered if perhaps Kit wasn’t the smartest one after all.  Maybe, just maybe, she had acted like she was the smartest for so long that everyone simply believed it to be true.  Regardless, it is a fact that Kit graduated from law school and got a higher SAT score than your mother’s and Bo-Betsy’s put together.

“Wow!” your mother and Bo-Betsy said in unison. Father, as Kit called her father, never Dad, or Daddy, or Pops, or Pa, was a very important lawyer who took the train into the city every single day to right the world’s wrongs. Father was the last father on Woods Road they’d imagine would own a sports car. But your mother and Bo-Betsy were in complete and total awe, especially considering that most of the cars in the neighborhood were station wagons. This was an ultra-cool, two-seater convertible.

“Can we come see it?” they asked excitedly.=

Cheryl Becker was Kit’s next-door neighbor and had a beautiful sister named Donna. Donna was a cheerleader at Springfield High School and had a boyfriend named Doug who was on the football team. Everyone wanted to be Cheryl Becker, at least until they were much, much older and learned that all that glitters is not gold. But on that summer day, Bo-Betsy and your mother were very, very jealous of Cheryl Becker, who was clearly going to get to sit in the new sports car way before they did.

Meanwhile, Pongo, somehow sensing the girls’ despair made his way back to the driveway. Always the protector, he walked slowly toward Kit’s bicycle where he very nonchalantly lifted his leg. And tinkled on the seat.

Your mother and Bo-Betsy roared with laughter. Kit’s thick eyebrows squinched closer together. Her lips tightened in a snarl. Her cheeks turned bright pink. She blinked her eyes, once, twice, seven times. But it didn’t keep the tears from spilling down her cheeks.

Kit was so mad, she didn’t know what to do. So she just hopped on her bicycle and rode on the tinkle-covered seat all the way home. Which, of course, made your mother and Bo-Betsy laugh even harder. So hard that they were afraid they too would tinkle in an inappropriate place.

And although Cheryl Becker got first dibs in the sports car that day, when all was said and done (and so, so much more was said and done), Kit eventually realized that when it comes to your mother and Bo-Betsy, it is always much better to give than to receive.