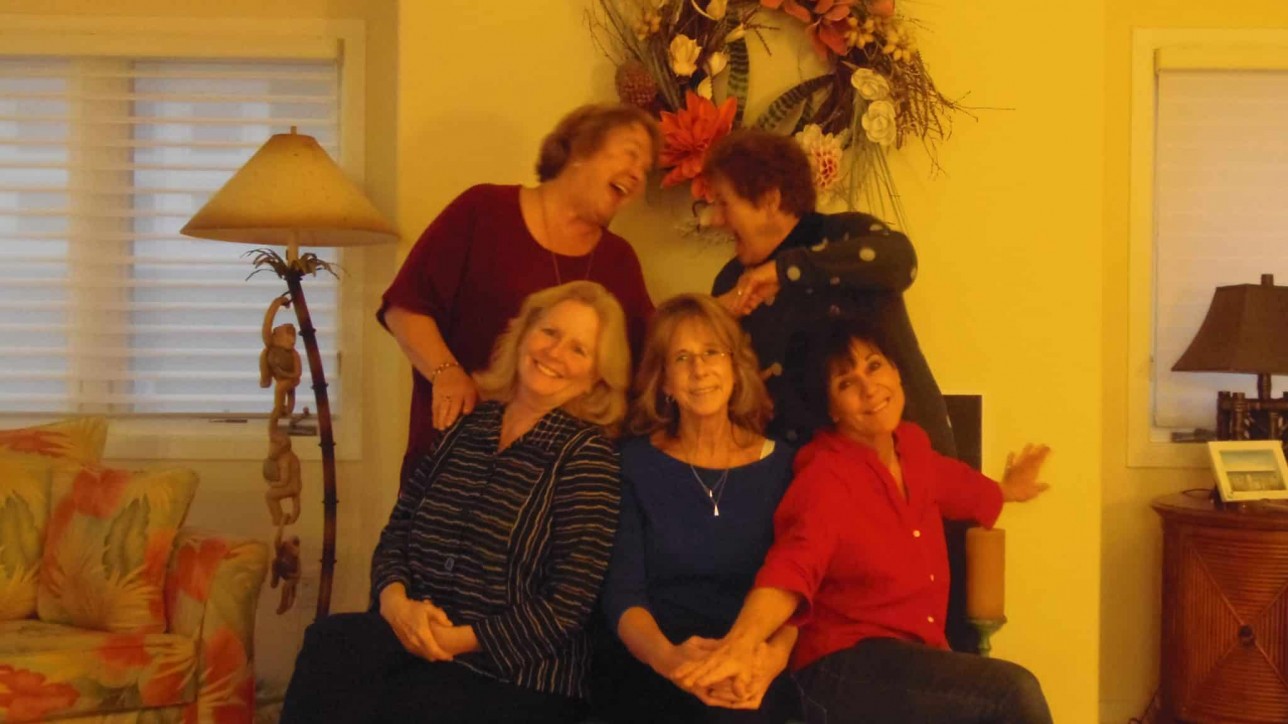 “Ugh. I am such a dog!” I barked when I saw the fireplace photo that Peggy snapped using the trusty timer on her camera, jumping into the picture as the red light blinked, just as she does every year.

“Oh, Betsy,” Leslie said.  “You are NOT a dog. You are beautiful. We are all beautiful.”

“At least our stomachs are hidden by the girls in front,” Jeanne added.

Woof,” Ann said, never one to buy into self-deprecation.

On this Annual All Girls’ Weekend, five of us found ourselves in Bethany Beach, Delaware – half-way between the two physically farthest friends; Ann in Nags Head and me in North Jersey.  We marveled at how far we’ve come, settling for nothing less than a five-bedroom, five-bath bayfront house with brand-new appliances and multi-faceted showerheads. We laughed as we remembered college nights sleeping toe-to-toe, fully clothed, on beer-stenched sofas in roach-infested houses, not wanting to leave the party for fear of missing out.

Now, the only thing we are afraid we’ll miss out on is sleep.

We went to the movies on Sunday afternoon to see Beautiful Boy, a story we found heartbreakingly lovely for close-to-the-vest reasons. We proudly accepted our senior citizen discount and were delighted that we were considered elder-worthy at such a young and tender age. We snuck snacks into the theater, took up two seats a piece and giggled about how daring we have become.

And, then we remembered the Ziploc baggies we snuck into the Little Feat concert at Memorial Auditorium and how at least one of us capped off the night drinking beer with the band around a swimming pool. Perhaps a feat not daring for that time and age. But it certainly beats pretzels in a movie theater.

“We should Uber to dinner,” I suggested.

“Yeah. We don’t want to break down in the dark,” Jeanne agreed, referring to the Check Engine and two other warning lights that had inexplicably appeared on the minivan dashboard that afternoon.

“Oh, it has nothing to do with that,” I clarified. “I just hate driving at night because ever since I had cataract surgery and got the multifocal lenses, I  see all these little rings in the car lights coming at me.”

And, then Ann and I retold the story of our late-night drive through the Blue Ridge Mountains as we traveled to a weekend folk festival. On the dark and windy Skyline Drive, we had not one, but two tires blow out.  And since we only had one spare, we relied on the kindness of strangers – a passing trucker – to transport us to and from the closest service station.

As we barreled into the Bluecoast Seafood Grill, we immediately and loudly began battling over where to sit. One of us didn’t want a booth in the corner because it was too intimate. Another didn’t want a table in the middle of the dining room because it wasn’t intimate enough. One wanted a high top. Another’s legs would dangle. Quickly sizing up the escalating situation, the greeter ushered us to a round table far from the maddening crowd.

“You want GUYS instead of sweet potatoes?”  Jeanne bellowed over the background din of clanging plates and scurrying waitstaff.

“Unless,” I said, turning to our server. “There are any spare guys available?”

She laughed politely and while her hearing was perfect, it was apparent that our exchange left her 25 year-old ears completely baffled.

“She has no idea how much fun we were,” I said as she sashayed away.

“How much fun we ARE,” corrected Ann, never one to buy into ageism.

Leslie was the one who started the yearly event. She threw a soiree at her mother’s house back in 1979 and on that day we clinked solo cups, vowing that we would have an annual All Girls’ Weekend every year until the day we die. And though one of us  has indeed died, and another bowed out for reasons no longer completely clear to any of us, we have kept up the tradition for 39 years.

For the first 25 years or so we rotated houses, making any husbands, roommates, boyfriends or children leave the premises. We eventually aged out of that, agreeing that no one wanted to make up all those beds, cook all that food, clean all those rooms, even if it ended up being only once every six years. So, we switched gears, extended it to a three-day weekend and began renting random houses, often off-season in deserted beach towns.

Peggy has never, not once in all those years, missed a single gathering.

We spent some time over the weekend trying to reconstruct our history.

“The first year we started renting was the year Evie was born,” I declared, definitively.

“Who is Evie?” Peggy asked.

“Remember, we were at that penthouse in Ocean City, Maryland. We were texting Phillip all weekend to see if she was born yet?”

“No,” Leslie confessed. “But I do remember I was the one who had to sleep on the couch.”

“So what year was Evie born?”

“Oh,” I said, crestfallen. “I guess that wasn’t our first rental.”

“Was it Annapolis?” Jeanne chimed in.

“No!” three of us roared in unison. “That came way later.”

“Where was that place that had the pool table in the basement?” Peggy asked.

“That was Dewey Beach. Or maybe Bethany,” I answered. “That was the townhouse where everything was broken. And the year we friended Paul Franze.”

“I don’t remember a pool table,” Jeanne said. “That must have been the year I got my hip replaced.”

“You got your hip replaced in October. I know it was February because we celebrated Leslie’s birthday.”

“I was there?” Leslie asked.

“We are in big trouble,” I laughed. “What if we live another 35 years? Will we remember anything at all?”

While over the years details have faded, stories have been rewritten and dates have blurred, we all hold on to one indisputable memory.

Forty-three years ago, on a September evening, I bounded like a Labrador Retriever, into Ann and Peggy’s dorm room in Harley Hall at Shippensburg State College. I had been stalking them for a week in Kriner Diner and knew I wanted them to join our pack.

“Will you guys be my friend?” I asked.

Those were really and truly the words that came out of my mouth.

The two blond-haired beauties looked at each other, shrugged their shoulders and said, “Sure.”

After all, don’t they say that a dog is the only thing on earth that loves you more than she loves herself?