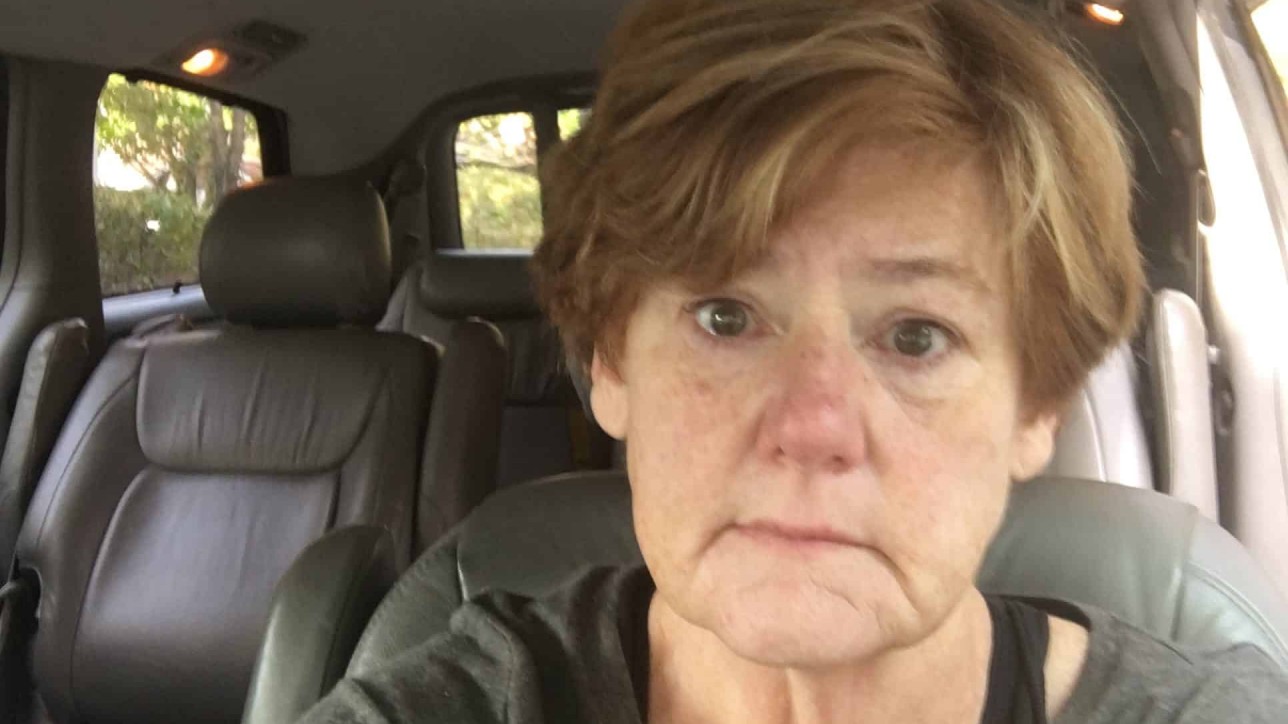 “Koree, you OK, back there?” I bellowed into the rear view mirror of the Old Minivan.

Koree flashed me a thumbs up.

Koree hadn’t been in the minivan for half a dozen years. Maybe more. But he was once a standard feature, as were Jordan and Jaelin, who that night, as usual, snagged the middle captain chair seats. Leo, being the proud son of the minivan owner, rode shot gun. Koree had always been relegated to the way back. But he never minded. He crawled back there, rolled up, and dozed off within minutes of being picked up.

“It feels like we’re going to a Titans’ game,” Jordan said, and the other boys, excuse me, men, concurred.

“The difference is, today you guys all got yourselves to my house,” I said. “Back in the day, I was driving all over Teaneck, and beyond, to get you. Remember, we’d be on our way to the game and I’d get a call from Anthony who needed to be picked up. Then Coach Leon would call and say we had to pick up some random ringer in Lyndhurst. And halfway to the field one of you would remember you promised Brandon a ride and we’d have to turn around and start over.”

“Yeah, sure. It’s funny now. How many times did I say these words: ‘I hate every single one of you and the mothers who birthed you?’”

I smiled, remembering that little ditty I sang every single time a new character piled into the van. Because, only the good ones ever buckled up on their own accord.

It was late August. My spouse had procured two dozen Mets tickets and suggested that Leo bring his old pals along. Just like old times, I’d drive us all to Queens, and he’d take the subway over from work and meet us there.

“This might be your last time in the minivan,” I said solemnly.

“Are you getting a new car?” Jordan exclaimed.

“Thinking about it,” I said. “I mean this thing is 15 years old. You guys were eight years old when we bought it.”

There was a moment, just a moment, of silence before we started talking about all the places we’d gone and the kids we’d transported in the Old Minivan. We talked about former teammates and coaches and crazy road trips in the snow, sleet, and rain. We remembered all the off-season trainings: batting lessons in Rutherford, speed and agility in Wayne, lifting with Steve DeMattheis in Caldwell, pitching with Bobby Jones at Paramus Catholic, infield, outfield and everything in between drills at Teels, Hot Corner, and Frozen Ropes. Friday nights in the Giants’ Stadium bubble. Saturday morning workouts in Central Jersey. Sunday mornings at an indoor facility in Oakland. Monday nights at the Waldwick Superdome. Parisi on the off days. Personal training with Mike Hoban, Kevin Ensenat, and Vince Burke, if you could fit it in (or afford it). We laughed about how we learned from Coach Leon that being on time was being late and snickered over picking up Benji and his boys in the Bronx and how they ended up sleeping in my basement.

We’d fill both the minivan and Coach Dave’s car and drive to Rhode Island, Delaware, Long Island, Central Jersey, New York state, South Jersey, Maryland and Virginia for tournaments. After the games, particularly after the bad losses, boys would trip over themselves trying to get the last seat in the van where there were no rules (except for seatbelts) to avoid driving home with their well-meaning mean parents.

The old minivan wasn’t just a baseball car. It did its share of cheerleading competitions in far-flung gyms; basketball games in Harlem, Queens, and everywhere in between; football games and combines on college campuses and fields afar. It delivered kids to sleepovers and birthday parties, SAT tests and barbershops, nail salons and part-time jobs. To family vacations in Avalon, Vermont, Canada, the Catskills, and New Hampshire. It made drop-offs at elementary school, pick-ups at middle school, and forgotten book runs to the high school. It went on college visits, college graduations, and to first apartments. It drove us to weddings and funerals and bar mitzvahs and dinner parties. To plays and concerts and malls and amusement parks. It took hundreds of trips down the turnpike to see our families in Pennsylvania and Baltimore, to visit friends in states near and far, and went on many, many, many girls’ weekend trips.

The children grew and flew and yet, I kept the minivan. I just kept driving and driving. And, the old fellow got more and more tired. By the end, the old minivan’s front fender was duct-taped together, there was a crack across the windshield, the headlights had cataracts, the college stickers were fading fast, the tires were unbalanced and bald, the wipers scratched and squealed, the door hinges didn’t hinge, and the poor old guy rattled, roared and rasped. But, still it drove on.

Fifteen years and 182,000 miles in, the old minivan and I went to visit my mother in Pennsylvania for her birthday. Halfway down the turnpike I heard an all-too-familiar thump, thump, thump. I pulled over, grabbed the duct tape from the back seat pouch, got out, and attempted to re-tape the fender. But, since it was pouring rain, I had to open the trunk, grab a towel, and dry the car so the tape would stick. I was cold and miserable, and at that moment I knew, it was time to pull the plug.

The day before I picked up my brand-spanking new SUV that talks to me, beeps at me, and veers me back on course, I cleaned out the old minivan. As I went through the consoles and glove compartment and seat backs and trunk bins, I relived a thousand memories.

Photos of my friend Claire’s seven year-old Noah, and a prom picture of Zack and Sibohan; a funeral card for my beloved college cronie, Chris; three rolls of duct tape; three pairs of gloves; eight ice scrapers (yes, eight); a lone lemon drop (Koree’s favorite); a bag of wintergreen lifesavers; a compartment full of tootsie rolls; my handicap parking tag from my hip replacement (five or six surgeries ago); a 2013 Christmas card from my favorite ESL student; three EZ passes (wonder if I got billed for them?); a photo of Coach Fernando, Coach Dave and Coach Tom in the dugout; a relaxation and healing CD that Ginny Brown gave me when I had breast cancer; a pair of scissors, 23 pens, three notebooks filled with grocery lists and reminders – check in with Diane Wells, buy dog biscuits and order The Last Convertible for book club.

I found a signed blank check; five pairs of sunglasses, three with both lenses intact; two pairs of reading glasses, a bank deposit slip from 2006; a dental appointment reminder from 2007; a feather duster (?), Max’s freshman basketball team photo; a PSP with Grand Theft Auto stuck inside; the original sales receipt from the minivan, as well the trade in papers from the preceding car; a 20th Anniversary card from my ever-loving spouse; a Taylor Swift, a John Prine and an Ashlee Simpson CD (all other CDs had been removed eight years ago when the last CD got permanently imbedded in the slot); a Titans’ baseball roster so old that Donovan Mitchell, now a star NBA player, was still on the list; a bill for a new tire bought after getting a flat on the way to my mother’s 90th birthday party; a 2010 Six Flags ticket; eighteen dollars and fifty-three cents; multiple half-full water bottles, and an almost-full pack of L&M cigarettes.

I was almost finished filling bags with the minivan’s contents, when I reached for my phone and blared my favorite John Prine song. The song I want played at my funeral. The song I chose for the Old Minivan’s farewell.

Memories, they can’t be boughten
They can’t be won at carnivals for free
Well it took me years
To get those souvenirs
And I don’t know how they slipped away from me.

As I unhitched my bicycle rack, I noticed through the dirty, dirty back window, a console that I never knew existed. There, sitting on a bed of crumpled chewing gum and granola bar wrappers winking at me was one last thing I almost missed.

A battered and bruised baseball.

And that’s when I cried. I really and truly cried.

“Koree!” I bellowed into the rear view mirror that Mets’ game night in August. “You still awake?”

“I’m still awake, Miss Betsy,” he said. “You know, the back seat of the minivan’s not as big as it used to be.”

I smiled a bittersweet smile. Little Koree is now a six-foot-two, almost 24 year-old man who grows hair on his face. But, to me, he’ll always be that little boy who, when he wasn’t sleeping, babbled about his dreams and schemes from the back of the van.

I can’t help but think of all the eight, nine and fourteen year old dreams that took root in the back of that car. Of the dozens and dozens of kids who piled in and out, leaving cleat dirt, hair ribbons, and candy wrappers behind. I think of how life has changed them, rearranged them, and taken them on journeys they never expected. And, I have to wonder if the Old Minivan didn’t have a just little part in turning them into the amazing young adults that they grew up to be.

The amazing young adults who, as they grew up, changed me, rearranged me, and took me on journeys I never expected, both in and out of the Old Minivan.