The Next Great Generation is Here 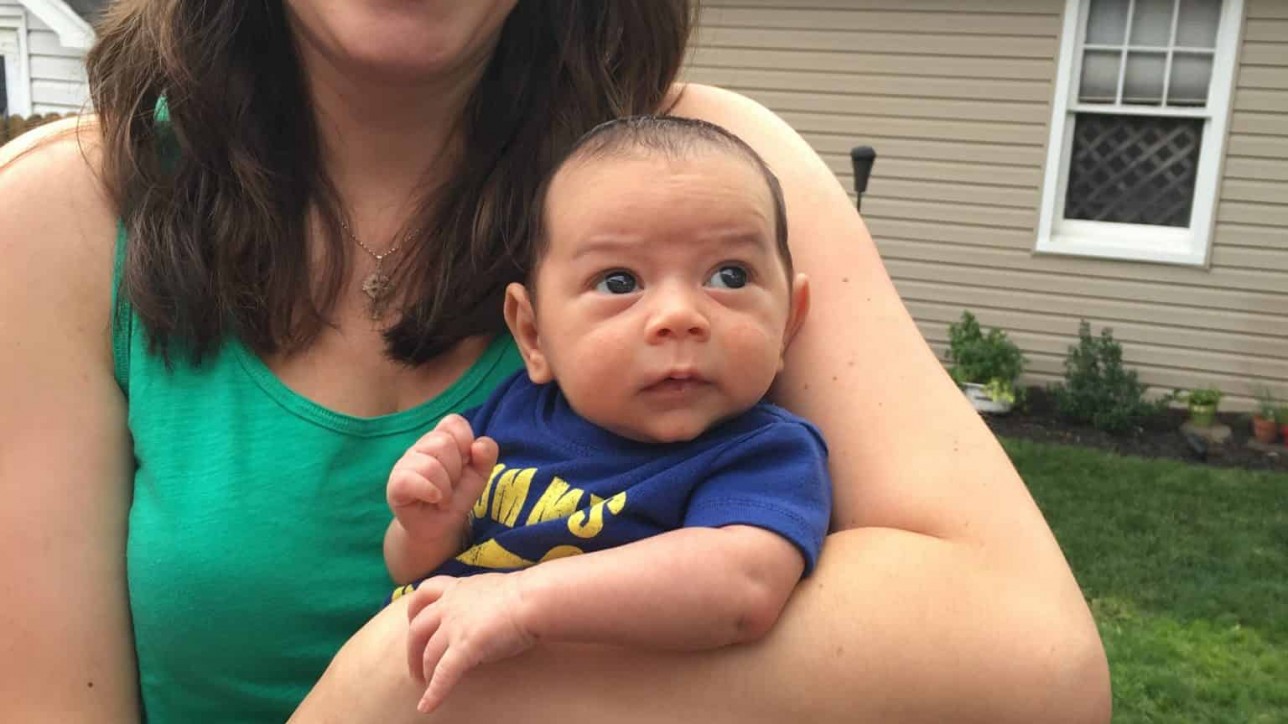 “Want to hold him?” Deirdre asked in the midst of a backyard graduation party on Saturday. One with free-flowing liquor, I might add.

I gulped. I really did. Then figured if she trusted me with her one month-old first-born, who was I to question her judgment?  And so, I cradled that teeny tiny baby boy in my arms, and soon  realized I wasn’t going to drop him. Some things you don’t forget, no matter how many years it’s been.

When I had my first baby, I believed, and rightfully so, that everyone in the world knew more about child rearing than I did. I tried to hide my uncertainty behind bold moves that included taking my newborn to a crowded restaurant days before her umbilical stub broke off, handing her off to any stranger who was willing to hold her and hiring an 18 year-old babysitter, who I interviewed for no more than thirty seconds, to be her surrogate mother when I went back to work.

I have always parented by two basic principles: what would keep me out of the headlines and public opinion. I would defer to my spouse if one of them needed stitches, Tylenol or a trip to the doctor. That way I could always blame him if, God forbid, anyone accused me of over-reacting.

Instead, I tended to under-react. When my kids turned ten, their adventurous aunt who, with no children of her own, knew less than I did, took them on a trip – anywhere in the world they wanted to go. The daughter chose Australia, the middle one went bicycling through Italy and the youngest boated down the Amazon River.

“You’re letting a ten year-old go on a plane, to another country, without you, even after what happened on 9/11?”

One year I sent my middle one to a sleep-away camp in its inaugural and very bare-bones season because I didn’t want to hurt the founder’s feelings. I walked away with the worst trepidation I’d ever felt in my parenting career. But I walked away.

I sent my 15 year-old daughter off on an unaccredited and only somewhat vetted trip to China because I had a girl crush on a mother who said it was a great opportunity.

I let my kids go to post-prom parties and weekends in Wildwood knowing exactly what was going to transpire. I let the middle one drive across the bridge into Manhattan the day he got his license and the youngest drive four hours to Boston in a “new” car with over 180,000 miles on it.

I let them swim right after they ate, go outside without jackets and play violent video games. I put them in over-populated cars to baseball tournaments 800 miles away and sleep in six-to-a-room hotels. I let them play basketball in the heart of Harlem, the bowels of the Bronx and in questionable parts of Queens. I never once called another parent to ask if they were really going to be home during the party. And I always said yes to water parks, road trips and late-night Fright Fest at Six Flags.

By the grace of God, my kids survived. They continue to travel, seek adventure, live in faraway places and do things they probably shouldn’t. Luckily, they’re all hale and hearty and happy that I didn’t hold them back.

But, it wasn’t because I was an easy-going mom. I harbored a whole lot of inner (and outer) anxiety over my parenting decisions, all because I was so afraid of what people would think. For whatever reason, it was always more important for me to be perceived as over-permissive than over-protective.

There’s nothing mothers like better than imparting their infinite wisdom to those who are new to the game. And so, while baby Connor got passed around faster than the hors d’oeuvres last Saturday afternoon, Michelle and I (and others who popped in and out in between Moscow Mules), shared the secrets of our many parenting successes, while consciously downplaying our many mistakes. And believe me, it’s really easy to see the difference when your kids are twenty years out of diapers. 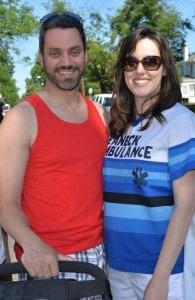 Deirdre and Bobby have that new parent glow that toggles between utter adoration and sheer exhaustion. They listened and laughed as we seasoned mothers made fun of ourselves. And because my kids made it through somewhat unscathed, I felt I had earned the right to taunt these brand-new parents. After all, young parents are the absolute worst — helicoptering and hovering far more than we ever did. I did my best to horrify them with my child rearing philosophies, both past and present.

“I bottle fed so the father could experience the joy of a 2 am feeding,” I confessed.

“Really?” I said, baffled. I thought every baby in this new generation came out glued to their mama’s nipple, not to be pried away until pre-school. With that, she tossed a bottle to my eagerly-waiting spouse so that he could relive the joy of feeding a baby. 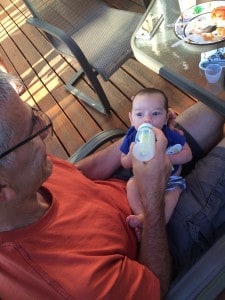 “I never sterilized a bottle in my life,” I added.

“Oh, I don’t either,” Deidre confessed. “After all, the minute you touch it, it’s no longer sterile.”

“We got our first babysitter when Molly was a week old,” I said, sure that I’d raise an eyebrow with that one. “I guess you haven’t left Connor yet?”

“Sure we have,” Bobby answered.

“You have absolutely no problem with people touching your baby,” I observed.

“Builds up the immunities,” Deirdre chuckled and I smiled, recalling the passing off of our first-born, three-day old baby to the mailman.

As Connor let out a big belch over my spouse’s shoulder, Deirdre’s parents swooped in.

“We were just in the neighborhood,” her mom said.

Deirdre smirked. My spouse handed the goods over to the grandfather. 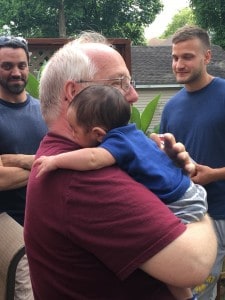 “I used to keep a little notebook to record every time my babies ate. I had them on a four-hour schedule and let them scream their heads off if it wasn’t time to eat. Every now and then I’d cheat and give them a bottle 15 minutes early. But then I lied in the notebook. As if anyone would ever know. Or care.”

“Look what I have!” Deirdre said, pulling out her phone to show me the app she used to record Connor’s feedings.

At 7:00, Bobby and Deirdre dutifully said good night and headed home to begin the bedtime ritual with their newborn baby.

“I’m shocked!” I said later to my daughter. “I can’t believe what good parents they are!”

“What do you mean?” she asked. “Of course they’d be good parents.”

“I’m just surprised they’re so calm. They treat him like he’s the third kid, not the first. They pass him around like a hot potato. They let him cry. They aren’t worried about germs and drunks and I don’t know, they’re just so un-overprotective.”

“Yeah, but, look how you turned out.”

I got that old familiar eye roll and smiled.

Because I’ve been in this parenting thing long enough to know that even if I did things for the wrong reasons, it was because there was always something about it that felt right. And while I certainly didn’t come close to doing everything right, my rights outweighed my wrongs.

Deirdre and Bobby will surely make their child-rearing mistakes and may from time-to-time be scorned by been-there-done-that parents and peers. But they’re going to do it with love-filled hearts, open-minded souls and probably a whole lot of prayer.

And that will make all the difference.

Welcome to the world, Connor. You’re one lucky fellow!