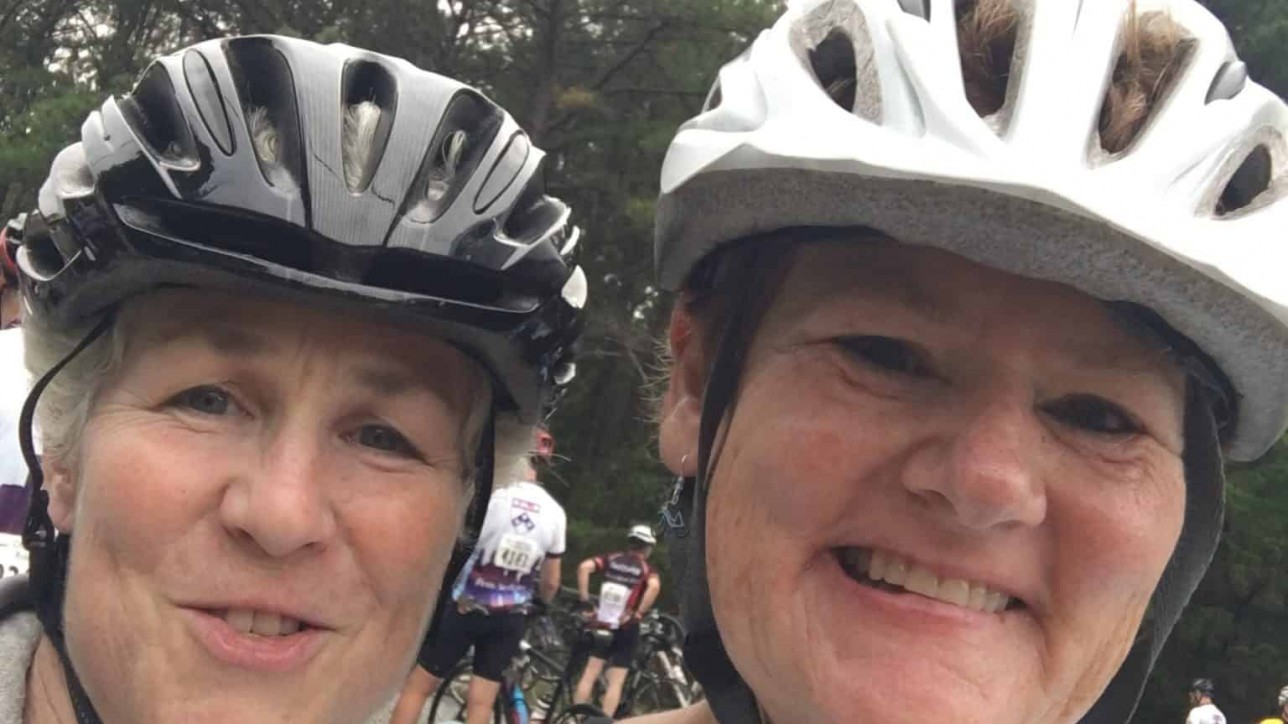 “Hey, Hon,” the millennial man-child with the Gore Tex capris breathed into his iPhone. “My legs are ON FIRE. I’m beat. Listen, can you use your hospital connections and get me some good Advil or…”

“Percocet?” I said a little too loudly.

“Yeah, or Percocet would be great,” he laughed and glanced over at me conspiratorially.

It was late Saturday afternoon and we were walking down 6th Street in Ocean City, heading to the bus that would take us back to Cherry Hill after finishing an 80-mile charity bike ride to benefit MS.

This was the fifth time I’ve done the ride. The first three times I was in my late twenties – back when I was much, much younger, much much stronger and much, much less rigid. We slept in boarding houses in lumpy beds, drank beer transported in backpacks and got up at the crack of dawn to ride back the next morning.

While I was raising children, losing cartilage and gaining weight, I often fantasized about doing the MS ride again. I’m not sure why. There were plenty of other things I had done in my youth that would be much more fun to relive. But once I planted the seed in my brain and threw it out to my sister, Emily, and lifelong buddy, Mary Anne, it was a done deal. In 2014, the three of us rode our bicycles 80 miles from Cherry Hill to Ocean City, New Jersey. We didn’t ride back because there was now a one-way option. Good thing, because sleeping in sub-par conditions off-season at the beach was one thing I wasn’t about to do at my advanced age.

I joke about being an old hag, but actually, my self-perception is that I’m 34 years old. 44 tops. I meet new people and assume they’re my age only to find out they are way younger. I don’t miss by a year or two. I miss by decades. I am continually shocked when I catch glimpses of myself in the mirror or worse, in selfies that accentuate my eye bags, forehead wrinkles and crepey neck skin. If it weren’t for my stiff joints and range-of-motionless knees to remind me, I’d honestly believe that I am still a spring chicken.

Which is why, hepped up on over the counter anti-inflammatories, I was so surprised by the greeting we got as we pulled into the first rest stop at mile 19 at 8:30 Saturday morning.

The MS ride is filled with an incredible amount of really nice, really encouraging, really helpful volunteers. They make food and serve food. They ride in sag wagons and fix flat tires. They hang motivational road signs on poles and paint directional arrows on streets. They stand in pot holes so we don’t ride in them and they stand at the rest stop entrances en masse hooting and cheering, tooting horns and clanging clangers.

Though 19 miles is longer than I usually ride on any given day, Mary Anne and I were cooking. (Sister Emily, in a last minute switch, opted to ride the 45-mile route with our friend, Mike Reynolds. They started south of us and we texted back and forth at rest stops so we’d know what was coming and where we’d meet at the end.) We felt good. We felt strong. We felt young and able.

As we turned into the driveway of the elementary school that hosted the rest stop, we smiled back at the cheerleaders who were screaming and chanting and inspiring us.

But, and I swear I’m not imagining this, more than one of them looked us in the eye with wonderment.

We peed in the (very clean; it was still early) port-a-potties, hydrated and chewed a handful of cashews in five minutes flat and went on our merry way.

I’m not a fast rider, but I can hold my own. And, I can keep up with Mary Anne who, long and lean, is way younger ( almost a full two years), rides fearlessly and even went on a bike trip through central Cuba last winter. Neither of us could hold a candle to the Tour de France factions that swished past us aerodynamically correctly in rapid succession. Nor did we want to. Just as long as we made it to Ocean City before Mack and Manco’s closed. We wanted our pizza.

At mile 57, in the middle of the online dating story (I had moved on to my friends’ sordid tales after Mary Anne gently reminded me I had already told her that story back at mile 38), we were passed by two men about our age.

Now, remember, I have a skewed sense of age so let’s assume that they were closer to 40 than 60.  But the point is, they were not kids. As they pedaled past us in their spandex, they gave us the obligatory thumbs up. And when the one handsomely bearded guy glanced over his right shoulder he said, and I kid you not, “Way to go, ladies!”

And when, some four or so miles from the finish, after panting our way to the top of the second bridge, the bridge purposely arched at an angle so high that a 13-story ocean liner could cruise gracefully beneath it, yet another man said, “Way to go, ladies!” I responded with a finger rather than a thumb.

“It’s not like we’re 90 years-old!” I ranted to Mary Anne. “It’s not like we’re missing limbs or are 400 pounds or are hunchbacked. I mean, I know we’re not teenagers, but we’re not so old that being able to ride 80 miles should be so shocking! And besides, who are these guys anyway? They’re older than we are.”

I don’t know if it was the pre-medicating, the handfuls of cashews I crammed in my mouth or the Diet Coke I had stealthily stashed for hydration, but when I got off my bike in Ocean City I felt just fine. I didn’t ache. I didn’t pain. I didn’t dread the bus ride back to Cherry Hill. I almost (and I do say almost) wish we were staying overnight in the lumpy beds and riding back the next day.

I felt so good that I actually felt a tinge of pleasure when I overheard the millennial man-child in the Gore Tex capris begging his girlfriend for pain killers.

But, because I’m old enough to know better, I stifled the words I wanted to spew. 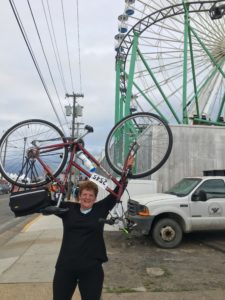