What Our Mothers do to Us 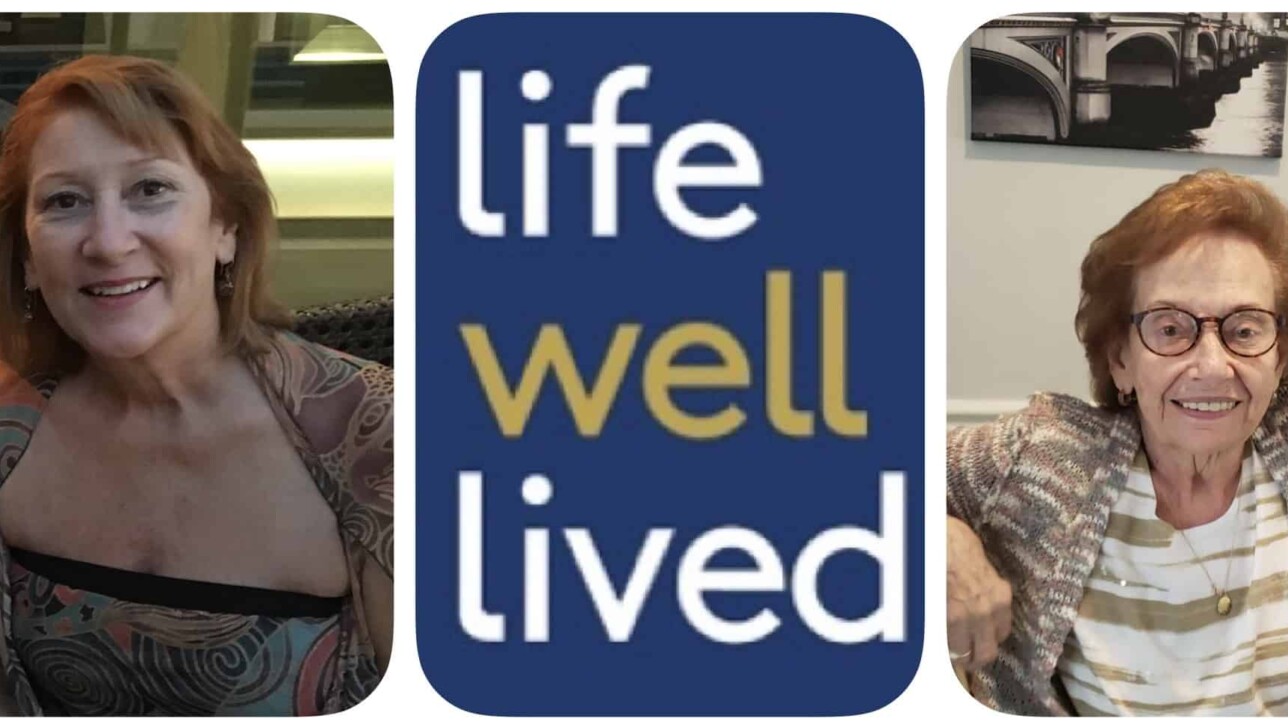 I will never turn into my mother. I know, I know; we all say that. But, in my case, I can promise you it won’t happen.

I will never look like her. Unlike me, she never carried so much as an extra ten pounds on her svelte self, excepting, of course, when she was carrying nine-plus pound babies. Unlike me, she never had to tame thick, frizzy, locks. Nor did she ever limp around from bad knees, aching hips, or bulging bunions.

I will never be like her. I never came close to mastering the fine art of formal dining, let alone executing consistent family dinners. I didn’t inherit her flair for incorporating contrasting palates and patterns into picture-perfect living spaces. Nor did I pick up her penchant for perfect present wrapping. No one was happier than I was when the gift bag came into vogue.

And I will never, much to my chagrin, act like her. I simply don’t have the calm gene, the keep-your-thoughts-to-yourself gene, the live-and-let-live gene, or the feign-love for the family dog gene. Instead, I proudly and loudly proclaim my perceived rights and slights, and transgressions of others.

But, of course, I am an anomaly.

At a certain age, as we grow into grown-ups, so many of my friends shriek with horror as they recognize that they have, indeed, turned into their mother.

For some, it starts with something as innocuous as tube of toothpaste. Arthritic hands wail for relief as day after day, the tube is squeezed and rolled and flattened, trying desperately to save three, maybe four cents worth of Crest. It could be an old-fashioned adage like “I’m sweating like a whore in church,” that rolls right off the tongue. Or recognizing that Mother’s meatloaf has unwittingly, but undeniably, become the ultimate comfort food of choice.

And for some, it’s not a specific thought, word, or deed, but a rite of passage of sorts, an unsuspecting seeping of one soul into another.

I’ve had myriad relationships with my friends’ mothers. Some wished I were their own, while others wished with all their hearts that I had never befriended their own. And that goes both ways. Patty’s mother is one who endured the test of time, as we all revolved and evolved through the years.

I can still picture Mrs. Ellis perched on the couch in the living room on Beech Lane, giving me an all-in-one eye roll, smirk and back-flip wave of her hand.

And, then she pushed the glass ashtray to our end of the coffee table in a, “You think I’m stupid?”  gesture.

“Go, have fun,” she’d say as we broached the subject of taking the little tan Corvair for a spontaneous spin down to the shore. We lied to the other mothers (sorry, Mom), assuring them we were spending the weekend at a friend’s parent’s house when actually we had no idea where, or with whom, we’d be staying.

Patty, of course, had the advantage of being the youngest of three; her two older brothers, Steve and Jimmy, were even more, shall we say adventurous, than Patty and company, and had come out the other side, if not unscathed, at least alive. So, perhaps that’s the reason Jean was a little more permissive with us.

But, it may just have been her deep faith in God, mankind, and the revocability of mistakes.

Jean was lucky in love. She was also unlucky in loss, seeing both of her husbands through not-so-great deaths. But, Jean pulled up her boot straps and prevailed.

At some respectable point after Patty’s father succumbed to ALS, Jean found herself at Fingers, a favorite local restaurant, bantering on a barstool with Bill. Bill was a fun-loving, no holds-barred type of guy, ready and willing to accompany Jean through Act Two of their lives. We all were invited to their wedding. Patty, Steve, and Jim’s friends ate, drank and were merry, toasting the new couple as if they were peers, not parents.

When Patty moved to Florida and met her future ex-husband, they had the northern version of her wedding celebration at Fingers. When Patty and I were both in town for holidays, we’d meet Jean at Fingers for a cocktail. And when Bill died about 10 years ago, the repast was held at Fingers.

Fingers isn’t Fingers anymore, but our memory of it is filled with Jean.

It wasn’t until Steve spoke at the covid-compliant, socially-distanced, live-streamed, funeral service that I realized that it had happened. Steve spoke of Jean’s passion for the written word, her love for all things sports, especially the Phillies, her wanderlust, her social life. He reminded us (as if we needed it) how much she loved her family, her friends, her kids’ friends. But most of all, she loved life. She loved to have fun. And loved when her loved ones did the same.

Yes, I smiled, and nodded my head into the abyss of the Facebook funeral.

But, it wasn’t until I read her obituary that I laughed out loud.

“She would also want you to tip your favorite server or bartender in her memory.”

Yup. For sure, Jean had indeed osmosed into all three of her kids. They are all well-read. They are all sports fanatics. They all love to have fun.

Patty and I shared Phillies’ season tickets in our formative years, dreaming of meeting Manny Trillo and Shake-and-Bake McBride. I believe our seats were bequeathed to us by Steve or Jimmy, or both, when they took off for Florida. Patty and I talk about our book clubs, sending reading recommendations back and forth. “Just try it!” she’ll exclaim when I say that Erik Larson way eclipses my Jennifer Weiner pay grade.

And, anyone who knows me knows that the great highlight of my year is my cruise with Patty. After all this time, we’re pretty compatible, meaning that she knows it will be smooth sailing if I get my choice of beds, shore excursions, and sundeck locations. But, tipping is one thing we do squabble about.

I am way cheaper than she is, and now I know exactly where she gets her generosity.

Patty and I were on the last cruise out before Covid struck. As a matter of fact, it hit hard while we were on the high seas, every day waking to news of another institution shutting down on the mainland.

Getting on the ship was a bit of an emotional challenge. I flew down to Patty’s house in Florida the night before, as I always do. It was a bit out of character for me to be nervous about something that was still so unknown, but my ever-loving and never-over-reacting spouse thought it was a bad idea for us to go. A very bad idea. Especially because, in early March, people were getting quarantined on cruise ships at an alarming rate.

Patty wasn’t the least bit concerned, but acknowledged my stress as text-after-text came in from my spouse citing horror stories, which in hindsight, were hardly horrific considering what was to come.

“Let’s call your mother,” I said as I shoved a handful of m&ms in my mouth while sitting at Patty’s kitchen table. “See what she says.”

Jean was on the cusp of turning 92 years-old and had finally and reluctantly moved to Florida to be near all three of her kids who had permanently migrated to the Sunshine State. She lived in one of those cruise ship-on-land graduated living communities to which I aspire, refusing to give up her independence and move in with one of her children, all of whom had plenty of room.

And so we went.

The celebration of Jean’s life brought me back to our last day on board with Patty and I bickering back and forth over how much to leave our favorite servers.

“We prepaid our gratuities!” I argued.

“Think of all that extra bourbon they poured in your drink,” Patty retorted. “Besides, they count on their tips for their families. And who knows when they’ll even sail again.”

“Oh, please,” I said, tossing another 50 dollars into the till. “Watch, this Covid thing will be contained in two weeks.”

Because we had been on a cruise ship during the outbreak of the virus, Patty wasn’t allowed to visit her mother for two weeks, so Jean missed out on our annual vacation debriefing. Instead, when I got home, I mailed her a copy of Susan Orlean’s The Library Book and shortly after received a gushing thank you note saying, “Thank God for books or I would be a nut case with this lockdown.”

She signed it, “Stay close to your buddy! Love, Jean.”

While Patty and her brothers would be reluctant to recognize themselves in their mother, the truth is, she managed to get under their skin in the best ways possible. She was fun. She was kind. She was generous.

And in her death, she did what all good mothers do. She took that last long breath and smiled, sending the best parts of herself off into safekeeping, into the souls and spirits of those she loved the most.

death, death of a mother, tribute