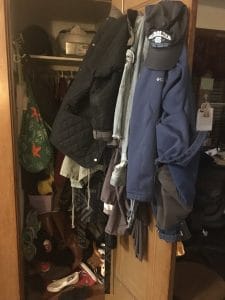 Like every other mother out there, I promised I would never use “Because I said so!” as an answer or justification for anything. Ever. I would instead reason with my children, giving them concrete explanations for why they were required to do whatever it was I deemed requireable.

Requireables throughout the formative years included, but were not limited to, knocking the dirt off cleats before they were put in the gym bag, completing homework before watching TV, going to bed before midnight, keeping the Little Tykes Cozy Coupe out of the living room, turning off The Lion King after three consecutive viewings, obeying the no-driving-after-11 pm-as-a 17-year-old law, even though no other parent in the history of New Jersey ever enforced it, turning lights, air conditioners and running water off when leaving the house, and throwing coats, shoes, bags and scarves on one’s own bedroom floor rather than overflowing the overcrowded and overstuffed first-floor family hall closet.

But, of course, like every other mother out there, I eventually tired of lengthy discussions on life’s most basic requireables and reneged on my vow. Over the long and arduous course of childrearing, I have indeed bellowed, “Because I said so!” half a million times.

Miraculously, though they may have fussed and fumed, my kids generally did what was required of them. Simply because I said so.

I had power. I had presence. I held rank.

Then they grew up and everything went to pot.

All of my kids flew the coop for college, going both near and far. Added together and divided by three, their scholastic distance average was 1,100 miles. Unlike many mothers, I had no problem with them being a plane ride or an eight-hour road trip away. That not only meant no unexpected weekend visits with bags (plural) of laundry, but gave me fair warning to clean the cobwebs off the vacant beds.

The California kid came back after he graduated, worked in Atlanta for a few months, moved home again and has now settled in Los Angeles. I think. The youngest, who finished school last May, is not only living at home, but working from home. And the daughter not only went south for college, but went even deeper south after she got her degree. When I dropped her in Chapel Hill eight years ago, I never dreamed she was gone for good.

But, gone for good never holds true for children.

They always come back.

The daughter, anticipating a tumultuous homecoming, planned her return for the day after I left for Vermont to work on the food truck for six weeks. By the time I got back in mid-August, she had re-staked her claim, removing the ping pong table, installing a new air conditioner and sprucing up her former roost in the attic with scented candles and decorative pillows from Target.

The daughter is actually a joy to have around. She’s smart. She’s interesting. She’s fun. And best of all, she leaves the house every morning by 6:30 and doesn’t return until after 7 pm. She retreats to her haven with a book by 9 and demands very little of me. Including conversation.

Living in a 90-year-old house, I have been deprived of a master bathroom, the most basic of human needs. When we moved in 13 years ago, we envisioned the kids slipping in the back door from sporting events and late-night parties for a sight unseen shower in the full bath in the refurbished basement. But, that never happened. Instead, my ever-loving spouse took that space over for himself, lessening the load, and the wait, in the upstairs bathroom.

Before I left for Vermont, I cleared a shelf in the bathroom for the daughter. I bought two plastic bins from The Container Store, sufficient enough, or so I believed, to hold all her items. Any overflow primping necessities could be brought down from her bedroom via plastic bucket, like the one I bought her freshman year. I’d even spring for a new one in the color of her choice.

The first time I entered the bathroom, I thought it was a joke.

She has 937 beauty products. On every square inch of available space. Leaving me a cup with a single toothbrush on a shelf high above the chaos.

“Can you at least contain your stuff?” I begged, ordering more plastic bins from The Container Store.

“What difference does it make?” she asked. “It’s a bathroom. No one comes up here but us.”

“I just can’t stand living with this much junk,” I said.

“Get over yourself,” she responded.

I retreated. After all, she’s right. We have a downstairs powder room. If anyone over 30 ever actually wants to spend the night, I’ll just blame the mess on the daughter. Or pay for their room at the Marriott.

On the plus side, at least her beauty products are working. She’s fairly attractive.

With the onset of plummeting temperatures, came the onslaught of outerwear.

“Can’t you take maybe half of your things up to your room?”

“Because I said so?”

Once again, I retreat. She is, of course, right. So, I drape my North Face jacket on the back of my desk chair and instead, push and prod and pull parts of clothing from the door jamb to shut the hall closet, on a daily basis.

I still have my requireables. Pay your bills on time. Go to the dentist twice a year. Take Ubers to the bar. And to the airport. Don’t call in sick. Don’t throw away day-old chicken. Wipe up your toothpaste spit. Replace toilet paper – correctly. Over, not under. Fill the Brita water pitcher.

I can’t help but wonder just when the tide began to turn.

And then, I catch a glimpse into my not-so-distant future.

I’m living in my creaky old house because my spouse refuses to move into the cruise-ship-on-land assisted living facility. I am old and stooped and in constant pain because I refused to ever get my knees replaced.

“Come on, Mom,” the daughter begs. “Eat your lima beans.”

“Mom. You can’t live on Diet Coke and pretzels..”

“For the first time in my life, I’m thin. I’m not eating that crap.”

I purse my lips tight.

“BECAUSE I SAID SO.”

And, I succumb. Completing the circle of life.