A Simple Case of the Kneesles: Rehab Part One 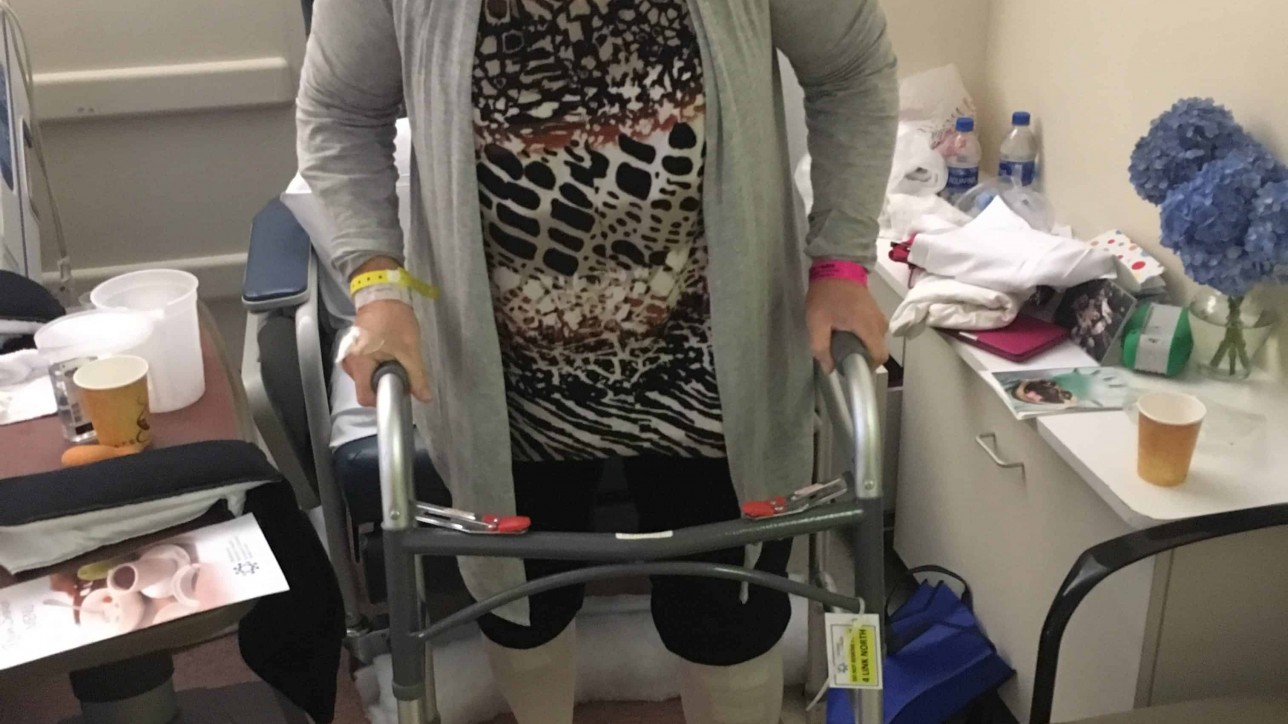 “Just stopping by to ask how your stay at Kessler has been,” the bright and bubbly public, human, customer or some other sort of relations worker asked on my last day at the rehab center. It was hard to keep the multitudes of people swarming my bedside straight. Admittedly, if the name tag didn’t allow the dispensing of pain killers, I was less likely to care who they were. She was not a dispenser. But, she caught me at a good moment.

“I loved it!” I exclaimed. “I would live here forever if I could!”

The bright and bubbly woman paused.

“Are you messing with me?” she asked.

“I am NOT kidding,” I responded. “This was the best week of my life.”

Two-and-a-half weeks ago, I went under the knife. The good doctor fileted my legs from thigh to shin, tore out my old and achy knees and put in new and improved hardware. He closed  me up with thirty staples and four sutures per limb, flipped me onto the “done” gurney and sent me on my way.

Later that very same day, when the wooziness had worn off and I was safely in my hospital bed, wanting nothing more than to succumb to that blissful anesthesia, Nurse Ratched came in to announce that nap time was over. It was time to get up and walking.

The following day I was doing laps around the nurse’s station with my walker.

And, on the third day, they were ready to discharge me.

“I’ll take care of you! You can sleep in the living room!” my well-intended, ever-loving spouse proclaimed.

Visions of my body splayed like a museum piece on display for family, friends and furry dogs infiltrated my psyche and wouldn’t recede.

“I can NOT sleep downstairs,” I declared in a tone so strong the case worker took it to heart and began proceedings to get me to rehab.

I had been to rehab after I had my hip replaced 18 years ago. It was not a happy experience as noted in my past tales. Going in to this thing, I had absolutely no intentions of being incarcerated any longer than I had to. But the thought of those 17 stairs, the rickety bannister and the recovery room that I had created out of my California son’s bedroom (complete with brand new air conditioner and remote-powered recliner) called to me loudly through my fuzzy brain. I was adamant. It was not safe for any of us if I went home. And I wouldn’t go home until I could safely sleep in the recovery room.

“Listen,” I confessed to one of those people with a name tag who didn’t dispense. “I’m doing this for my spouse, not for me. When I’m unhappy or in pain, I can be pretty unpleasant. But, I promise, I’ll be a model patient at rehab. It’s just not in my nature to be mean to people I don’t know or love.”

And off I went.

Now, if you’ve never been in the two-new-kneed condition in which I found myself, it may not occur to you that the getting there is almost as scary as the been there. It’s a frightening thing to be carried on a gurney, especially for someone of my girth. But, somehow, these trained professionals are both strong enough and smart enough to move mountains, both physically and emotionally. Thanks to the kindness of the Teaneck Volunteer Ambulance Corps, my friend, Joe Harris, and his perfectly personable assistant, Michael, delivered me in one painless piece to my new vacation home, just two miles down the road from the hospital.

I was deposited, oh so gently, from stretcher to bed in a room divided by a khaki-colored floral curtain just a few minutes before my roommate, a double amputee, was whisked from her window bed and taken back to the hospital for something gone wrong. It was a whirlwind of in and out but I was still too deep into transition to process any of it.

There were new rules at Kessler. I wasn’t permitted to walk to the bathroom alone. I wasn’t allowed to get out of bed without pushing the call button. I had to be transported by wheelchair. I was back in a hospital gown.

I had to train a whole new flock of people to bring me a constant supply of ice chips, that yes, despite it being 90 degrees outside, I DID want all five blankets and six pillows on my bed and that I would not, could not produce that coveted stool sample as long as they stood guard outside the bathroom door.

And when my roommate was wheeled back in at midnight with the fanfare of a street parade and I laid awake into the wee hours, willing myself not to have to pee, I wondered if I hadn’t made a mistake by not going right home.

But, when 5 am rolled around and the blood taker came and stabbed my arm and I tore off my nighttime immobilizer braces, trying to un-Velcro the eight-on-each-leg straps as quietly as possible, uncreaked my knees and emptied my throbbing bladder, aide perched outside the door. “Pull the call bell when you’re done!” I knew it was just a matter of getting used to a new routine. And making new friends.

Following my English muffin and bacon breakfast which came hot every morning, I met my first new best friend, Michael, from Occupational Therapy.

“I’m here to teach you to get dressed,” he said.

“Joy,” I responded. I barely let my own spouse see me in various stages of undress, let alone a perfect stranger. But, Michael was a professional, staging his act so he didn’t actually see me in any stages of undress. He demonstrated the ins and outs of pulling up pants with a reacher, using an extended shoe horn and even a super cool sock putter-onner. Michael was so good and so congenial that I truly believed he cared about the whole life story that I revealed in my various stages of non-undress.

At Kessler, the victims have three hours of therapy, scheduled throughout the day in different time increments. Alyssa was my main physical therapist and by the end of our time together she knew 75 percent of my quirks (I always like to keep some close to the vest). Meanwhile, I extracted plenty of personal info about her, her beau, her upcoming nuptials and her family dynamics. Doing chair-to-stands and braving the steps were simple tasks when disguised as buddy bonding.

Christine, my occupational therapist, and I never stopped talking as took me to another floor to practice getting in and out of a fake car, stepping in and out of a bathtub and getting dishes in and out of a cabinet. Through it all, we yakked about the ins and outs of kids’ sports and the crazy schedule (believe me, it gets worse, I warned) of her thirteen year-old softball player daughter. Again, we were more like friends than torturer and tortured.

Never one to keep my ears to myself, I heard Jackie, one of the “fun” therapists talking across the room about a wedding she was going to on July 19th.

“Me too!” I bellowed. “That has been my recovery goal, to make it to a wedding three weeks to the day from my surgery. Hey, maybe it’s the same one!”

“Yeah, maybe,” she said, assuming I was on narcotics.

“Kristen and Mike’s?” I asked, knowing I was on narcotics.

She shrieked. I laughed. She is the maid of honor at the very same wedding.

“I’m going to be off my walker by then,” I declared.

I had great aides like Ivy who never made me feel bad about ringing my bell. And Nick and Rosa. Rosa who yelled at me for throwing my dirty washcloths on the floor as if it were a hotel. Rosa knew what she was dealing with and kept me in line.

And then there was Jack, the MC of the show. He sat at the reception desk and orchestrated the ins and outs of patients and after my roommate went home, I begged him not to let anyone else move in. And, while happenstance kept the other bed empty for four full days, he let me believe it was because I asked.

While it was frustrating not being able to do what I wanted when I wanted, my week in rehab had all the makings of a vacation. In between heel slides and knee bends, I wasn’t cooking, cleaning, doing laundry, going grocery shopping or doing the daily stand-off of refusing to feed the dog before 6 pm. So, when my stay was over and I said goodbye to all my new friends, it was as sad as disembarking from a cruise ship.

I’ve been home a week now and my rehab memories are already beginning to fade. But I’ll forever keep in my soul my double amputee roommate who continues to inspire me every single day. I can not moan. I can not cry. I can not complain.

Because, thanks to the people who motivated me, manipulated me and befriended me, I realize, in the grand scheme of things, my great big personal trauma is nothing more than a simple case of the kneesles.