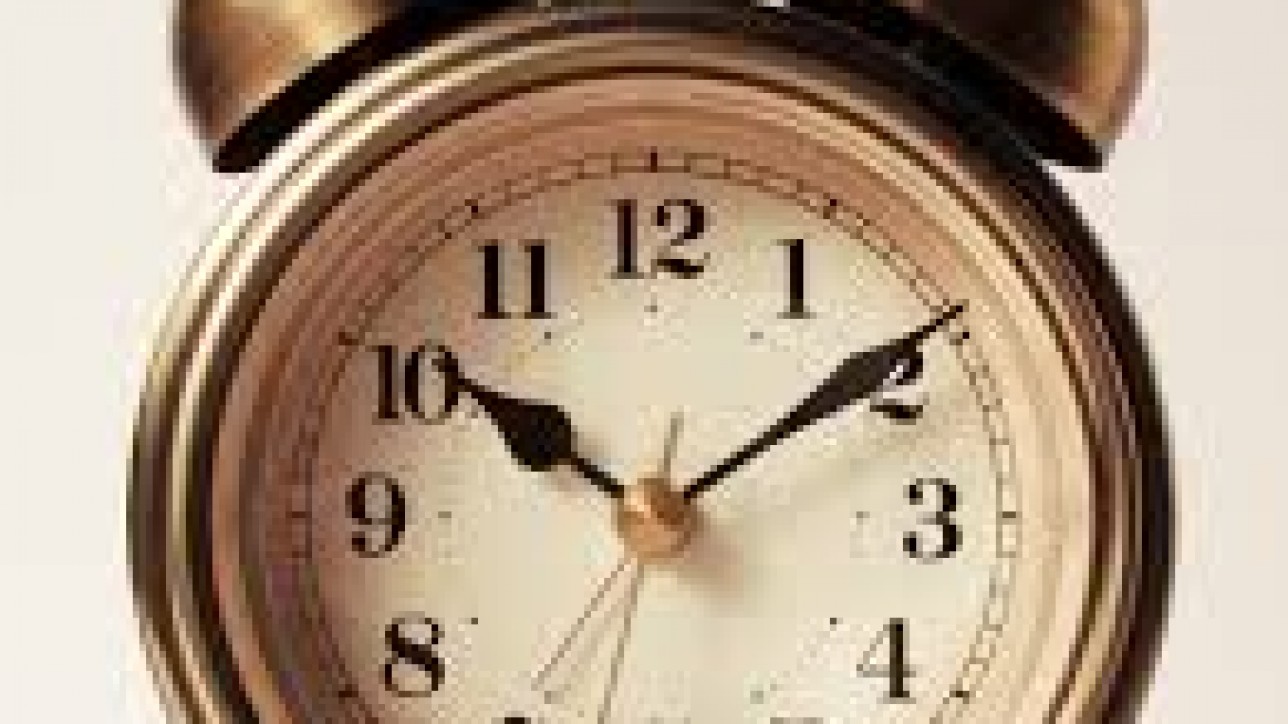 My father believed that being on time meant being 15 minutes early.  Or 20 or 30, depending on the event. And his mood.

“What time are we leaving?” we learned to ask, even when we knew softball practice was at two o’clock, that it was a five-minute ride and that we couldn’t get on the field until the team practicing before us finished.

As nature will have it, parents’ rules, habits, ways-of-life, quirks, whatever you want to call them, tend to filter down to their offspring. Children were born in our likeness and we want them to be like us. Unfortunately or fortunately, as the case may be, we can’t completely control who they become.

In my over-aggressive attempt to win the coveted favorite award, I grew up to be just like my good old dad. Timely. To a fault.

Having three children in rapid succession certainly challenged my timeliness, but I simply factored in an extra hour to everything I had to do.

I don’t think I’ve ever been late for anything in my life.

And yes, I realize it’s an annoying trait for those with different senses of urgency to have to deal with. After all, I lived my entire childhood up against the clock.

My friend Dianne has an annual Christmas soiree that starts at 7:45. Now, I do understand that party start times are somewhat negotiable and that no one wants to be the first one there, but Dianne’s party is different. It is carefully orchestrated with hors d’oeuvres and desserts that put Martha to shame. I like to honor her efforts by being on time. Plus, I don’t want to miss a single bite. So, for the past 20 years, we have arrived at the party at 7:50. And we are never the first ones there.

This year, when my spouse, who has known and loved me for longer than he cares to admit, was listening to his Rosetta Stone Learn-a-Language (Spanish) tapes at 7:45, my heart started racing.

“You almost ready?” I called down to the basement.

Fifteen minutes? Was he kidding?

But, in a rare display of holiday cheer, I didn’t say a word and just suffered with my shaking innards until we walked out the door at 8:10 pm.

When I fly, I get to the airport a full two hours in advance, whether I’m departing from a jumbled-up mess like Newark or a manageable mecca like Raleigh/Durham. For movies, I have an arrival standard of ten minutes before the previews start which is a good 20 minutes before show time. Appointments-15 minutes, even though I’ve rarely sat in a waiting room for less than 30.

It is unfathomable to me why anyone would want to be risk being late and a mystery as to how they can quell their anxieties. And so, I feel their anxiety for them.

It can be something as innocuous as Molly saying she’s going out with Heather at seven o’clock.

“Molly, aren’t you picking up Heather?”

As long as I’m not part of the plan, I have learned to let my spouse leave when he wants without weighing in on the matter. Though I will occasionally say something like, “Isn’t your train leaving in 40 minutes?”

To which he’ll reply, “I’ve got plenty of time.”

And he does. He never misses a flight, a train or a meeting. I just don’t know how he can live his life so down-to-the-wire. On the other hand, he can’t understand why I would ever choose to waste time in a waiting room.

When Leo left for the mall with his friends yesterday afternoon, I let him walk out the door without saying a word. But I texted him soon after.

About 3:45, the palpitations began.

I tried to talk myself down.

Or does it? No matter how hard I try to shake it, I still believe that my children’s improper actions, reactions, or lack of, are a reflection of my parenting.

I still think that every unacknowledged present is met with an adult shaking their head.

“No wonder her kids don’t write thank you notes. She spoiled them rotten.”

And every missed appointment, tardy-to-class and late pick-up means that I didn’t teach them to value someone else’s time. Already, the dentist had squeezed Leo in so he could get one more scraping in before returning to his plaque-producing college diet.

Maybe I should text him a reminder; it was conceivable that he forgot once he got tangled up with his friends. But then I reasoned that he is 18 years-old and still has a sharp mind. He won’t forget something in a matter of two-and-a-half hours. Unless, of course, he wants to.

“Going right to the dentist.”

I breathed a sigh of relief, though since his friend had driven, it meant that I had to go out in the freezing cold rain to pick him up after the appointment.

But I couldn’t complain. After all, I got what I wanted.