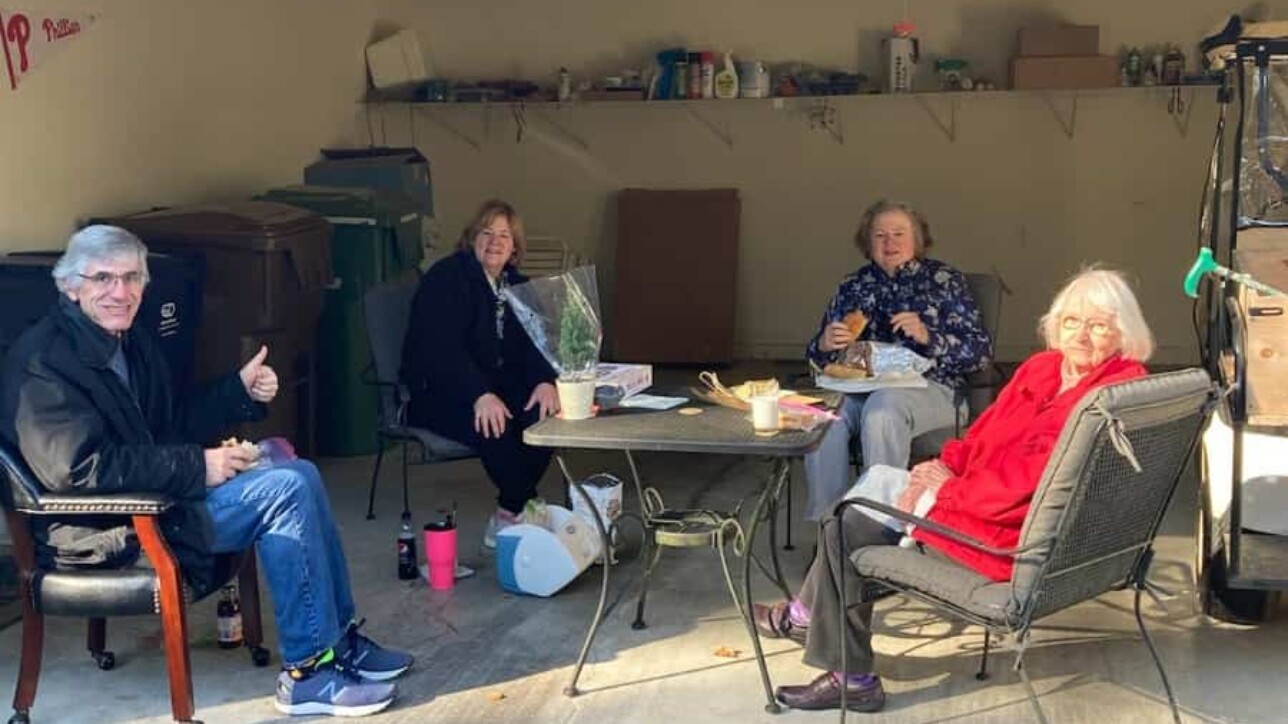 “Think of the excitement we are usually feeling at this time, on this day,” Sister Emily texted this afternoon. I had just returned from the grocery store, picking up potatoes for tomorrow’s mashing.

On a normal Thanksgiving Eve day, I’d be on the turnpike right about now, imploring Siri to send a text to Sister Emily. “Be there in 45 minutes. Stuck in traffic at Exit 8.”

We’d buzz around her house, scrutinizing the step-by-step dinner directions sent by Sister Nancy, making a call to Sister Susan to confirm pick-up duty of our mother the next day, me running to Wawa for a bag of ice after determining that it would take way more than 24 hours for her ice maker to make enough ice to freeze away my fears of a lukewarm water glass. While I was gone, Sister Emily would have showered and put on the outfit of the year, me nodding from her high and fluffy bed with approval, perhaps selecting a bright accessory to enhance her image.

We’d chatter away on the six-minute ride over, pre-gaming our hopes wondering who would be there. Would Taylor and Jenna fly in, literally, like he flies his own plane? Will this be a dancing night? A fire pit night? Which Schaeffer son will fill the house with the most friends? Would Tommy Dickinson and Jane really show? Would we beat Rob and Mon there? Is this Kit’s year to come and will Mark make an appearance with his bride-to-be? What kind of vegan delicacies would Johnny IV showcase between the filet and the pigs-in-a-blanket? And will Michelle’s bunion finally be healed?

Every year at Schaeffer’s, while always different, is always the same. It’s the one time of year that there are no words to regret (well…), no calories to lament, only thankful thoughts that we have had a lifetime of tradition with lifelong friends.

Thanksgiving Day has had many incarnations in my 60-odd years of life. But, it’s always been the same basic tradition. Always on fine china, always a big bird, always a family feast; first on Woods Road, right down the hill from Schaeffer’s, eventually morphing over to Sister Nancy’s gourmet kitchen in Oreland, and when she moved to Charleston, over to Sister Emily’s house on Preston Road. One year, and only one, we deviated. It was the year my father died, and for some odd reason, we all thought we’d feel better if no one cooked and cleaned and fussed and fumed. Of course, we were wrong.

Thanksgiving is my very favorite time of year. It’s the perfect blend of everything I love most – friends, family, and food. And once the food has fermented into flab, the weekend is always topped off with a Friendsgiving feast at the Santostefano’s. What’s not to love about Thanksgiving? The most I ever had to do was mash the potatoes and show up with a bottle of Basil Hayden.

Anyone who has known me for 15 minutes knows that I have many rules and proclamations, most of which make absolutely no sense to anyone. Least of all myself.

For instance, I have never had a cup of coffee or tea in my life. I will never sleep without a fan blowing in my face, not at home, not in a hotel, not on a cruise ship, whether it’s 90 degrees or nine. I will never order a drink, neither water or whiskey, without an extra cup of ice.

And I will never cook a Thanksgiving turkey.

But don’t get ahead of yourself. I’m still not cooking a Thanksgiving turkey.

For the first time in as long as I can remember, there’s no Wednesday night at Schaeffer’s. No turkey and stuffing with my mother and sisters. And, no friends’ dinner with the Santostefano and Formisano families.

And for the first time ever, I’m hosting – if you can call it that – Thanksgiving. It will be me, the ever-loving spouse, the youngest son and the only daughter. We don’t need a leaf in the table, we don’t have to borrow fold-up chairs from the Hargraves (actually, we never returned them from the daughter’s high school graduation party), and I don’t have to cook a 23-pound turkey.

Because the irony of it all is, along with everything else, my oven is broken.

But we’ll improvise. The daughter’s good at that. I just have to take a deep breath and allow another human in the kitchen (my mother’s fault – she didn’t let anyone in until she turned 90). We’ve got an air-fryer, a crock pot, a microwave, an indoor grill, an outdoor grill with no propane, and a stove top. And, don’t judge me, a nice, small pre-cooked, pre-sliced turkey breast from Trader Joe’s. How bad can it be?

And, if the mother stays calm, once the kitchen is clean, I just may break another rule and descend the steps to the basement and succumb to the daughter’s wishes for a family viewing of her favorite movie.

Because, despite our world being (temporarily) broken, there’s no denying the fact that It’s a Wonderful Life.