Carolina in my Mind 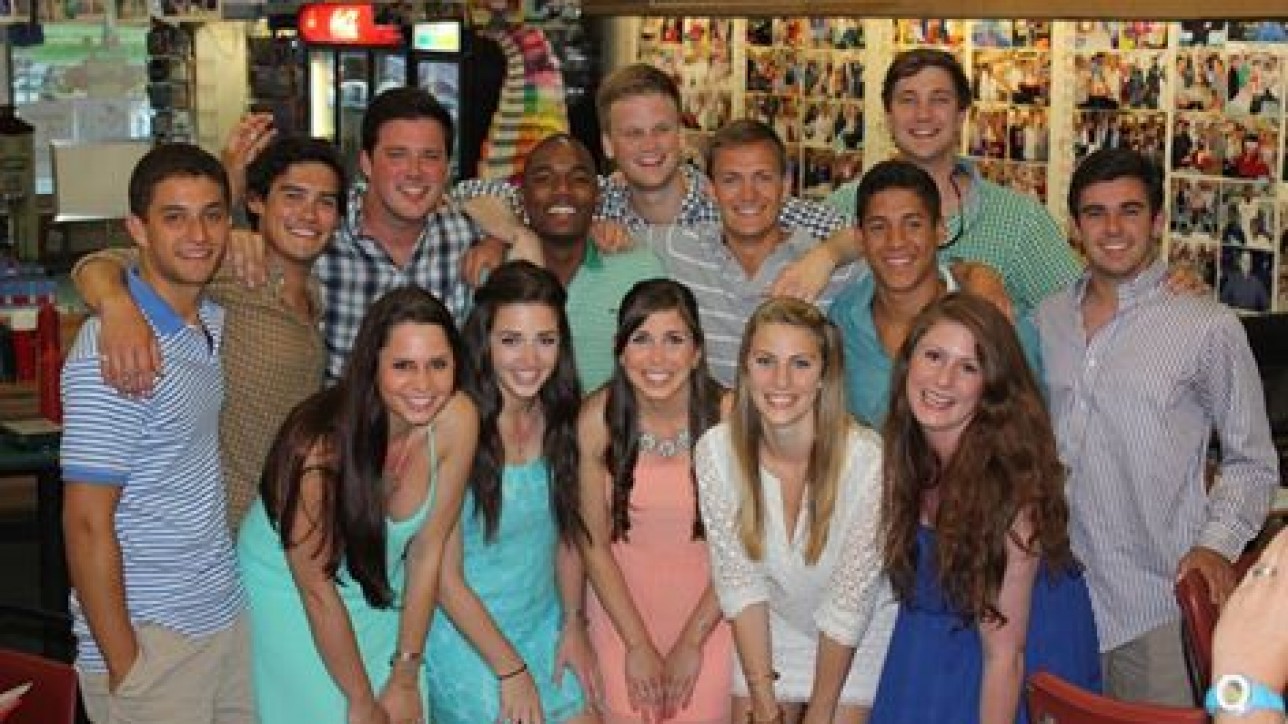 The graduates with the UNC Clef Hangers
Sutton’s Drug Store
May 11, 2014

It all began on a flight from Denver to Durham. It was August of 2010 and Lauren Gennaro was heading to the University of North Carolina as a freshman. In a simple twist of fate, her parents, Carla and Joe, struck up an across-the-aisle conversation with Stephen and Sandra Rich who were returning home to Chapel Hill after visiting their son in Colorado.

Every now and then in life you meet someone with whom you instantly click. You feel as though you’ve known them your entire life and when you get off the plane and exchange numbers, you know that you will indeed call.

And that’s exactly what happened. Sandra and Stephen became surrogate parents to Lauren and her four roommates plus incredibly gracious hosts and cherished friends to their families.

Molly wanted me to come to Family Weekend her freshman year. I flat out refused, vocalizing my distain for inflated hotel room costs, crowded campuses and fraternizing with her friends’ parents. I had no doubt that they’d be pleasant enough folk, but really, did I need friends that came with an expiration date of May, 2014?

But, I eventually gave in and subsequently spent many weekends at UNC with Sally and Dan Wajahn, Jackie and Tom Shea, Ruth Gonzalez, Carla and Joe Gennaro and Sandra and Stephen Rich. I adore them all and have no doubt our friendship will continue.

The four years went faster than any so far and it just didn’t seem possible that graduation was upon us. As the parents group texted and made plans for the weekend, we felt our hearts growing heavy at the thought of goodbye.

But time passes as it will and graduation weekend arrived. Families came in spurts with various glitches, but we all got there. No surprise to anyone, the Voreacos travel plans were the most convoluted. I took a train a few days early, Max hopped the red-eye from California, Leo’s baseball game was canceled, so in the end we managed to spend a solid 24 hours together in Chapel Hill.

It was a beautiful but tearful weekend. The girls loved every minute of their four years at UNC. They found the loves of their lives, the louses of their lives and unearthed their passions in life. All of them graduated on time, three of them with honors, one with the highest honors you can get. The five of them will never live together again.

Which is why, when Julianne’s father surprised us all by hiring UNC’s renowned acapella group to serenade the girls at Sutton’s on the final night, there was not a dry eye amongst them. The Clef Hangers sang Happy, which they all had been, Crazy Love, which they all had found in one form or another, and ended their show with Carolina in my Mind.

In my mind I’m going to Carolina.
Can’t you see the sunshine, can’t you just feel the moonshine?
Ain’t it just like a friend of mine to hit me from behind?

When all was sung and done, the tears in our eyes and the lumps in our throats affirmed that we had done our job as parents.

Jenny is off to medical school at Ohio State, Lauren is pursuing a career in public relations in DC, Julie will be working at an ultra-hip research company in Atlanta, Molly is going to be a Teach for America corps member in New Orleans and Julianne, well when Julianne stops crying, she hopes to start her new life in Boston. Not one of them plans to live at home.

As one of the commencement speakers quoted, “A ship in harbor is safe, but that’s not what ships were built for.”

We did it. We raised our children in safe harbors, but somehow gave them the courage to venture out. We taught them to trust their instincts and their hearts. We taught them the value of education, the significance of commitment and the importance of making the right friends.

This is what we spent the last twenty-two years doing. Yet when the time comes and the ship is set to sail, we can’t help but feel that hole in our hearts.

But I know that I have not lost a daughter. Like Julianne, Julie, Jenny and Lauren, Molly will shine her way through life and come back home when she can. They will all be happy in love and successful in life. They will aim high and stay strong. The ocean is vast, their ships diverse. But wherever they go and whatever they do, they will never, ever forget the parents who shaped them and stood behind them all the days of their lives.

Nor will they ever forget the families who loved them all the way through their college years.

Because they know as well as we do, that there is absolutely nothing in this world we wouldn’t do for each and every one of them.