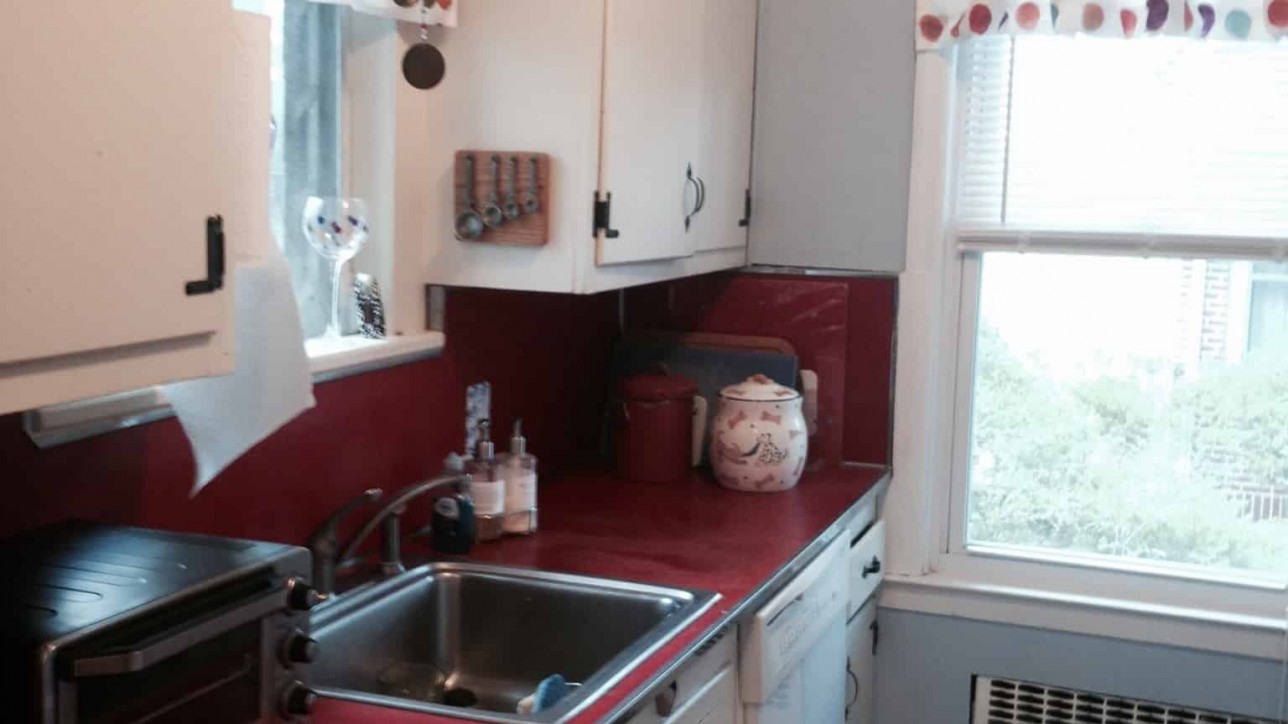 We were living in a white brick Cape Cod house down the hill from my best friend Claire. On summer days we could hear each other screaming at our kids and the sidewalk that stretched from her house to mine allowed our little ones to run back and forth unsupervised. This first house of ours was directly across the street from a park with a brand new jungle gym and a wading pool and was a stone’s throw away from the Board of Ed building where I spent many a big night out. It had a perfectly planned perennial garden with flowers blooming from spring until September. In the backyard, built into the ivy-covered hill, was a splintery wooden slide that no one but the groundhogs ever used. There was a tiny galley kitchen that opened up into a dining area with big casement windows on three sides. There was a half-finished basement with a big wooden desk that collected clutter. It was a happy little home.

But when my dear, dead uncle bequeathed me a little extra cash, I decided it was high time to re-do the dated kitchen. I talked to a contractor who had all kinds of expensive ideas on how to make it both more efficient and more attractive. I bought into all of it, except for the countertops.

“I want red countertops,” I insisted.

“Nah. You gotta go with the granite.”

I don’t know how I got red countertops stuck in my head, but I wasn’t budging. We talked for a couple of months during which the plans altered and amplified. I found myself buying into a new bathroom (after all, five of us were sharing one shower and my kids were heading into the years where they would spend inordinate amounts of time behind closed doors), a walk-in closet and a torn-down wall. But in the end, we weren’t getting any additional living space and I finally conceded that to get what I wanted would cost way more money than it was worth.

Though once the seed had been planted, I could no longer see beyond the chaos in my cluttered little house. It was filled to the gills with twelve years of living and I knew the only way to dig ourselves out was to get ourselves out.

And that’s when I started looking at houses. My ever-sensible spouse said we should just make do and save the money for college. I assured him that we had still had plenty of time to get rich.

I found a perfect split level house near the Little League field. It had absolutely no personality but there were so many floors, we could each have one of our own. It had central air-conditioning and a modern kitchen. I was sold. And my spouse reluctantly conceded, being fully aware that a happy mother meant a happy house.

And then, Kerri Mather, who was one of my very first friends in Teaneck, announced that the house next door to hers was for sale.

She told me they had just refinished all the hardwood floors as well as the three (count ‘em, three) bathrooms and that I should at least check it out.

And because I’m a people-pleaser, I did.

I was greeted by the realtor, Kathleen Wicklund, who also happened to have grown up in the house. I told her I really wasn’t interested but had promised Kerri I’d take a look. I walked into a sun-drenched living room and smack into the perfect place for our piano that no one plays. The floors were shiny and the wood-trimmed windows gorgeous. But, when I went up the stairs they creaked. Loudly. And there was no central air.

Then I saw the huge finished basement with a separate laundry room. And the walk-up attic that would easily fit all three kids and thirty of their friends. There was a covered front porch and plenty of large bedrooms. The house was charming and full of character.

But, just as I was beginning to cave, Kathleen dropped the bomb. They hadn’t redone the kitchen because she and her siblings couldn’t bring themselves to demolish the kitchen her mother had loved so much. Well, that’s that, I thought. I’m not buying a creaky, old house with a battered kitchen. After all, his whole thing started over wanting a new kitchen.

But, it was huge, that eat-in kitchen. The walls were painted Carolina blue and a sliding glass door opened onto a good-sized deck overlooking a fully-fenced, double-sized backyard.

It was the red countertops in the kitchen.

We’ve been here eight years and the house is still old and creaky. But it’s not quite as loud. I smile as I remember how those squeaking stairs thwarted my children’s attempts to sneak in late at night. I hear the side door slamming with random kids running in and out of the basement at all hours of the day and night. I see silhouettes of teenagers asleep on our couches and sitting at our kitchen table eating pasta, planning the prom and writing college essays. My spouse still splits wood in the backyard and builds crackling fires in the living room fireplace on cold winter nights. Griffey still bounds about chasing squirrels over the fence. And I still sit on the front porch and watch the sky lighting up during summer thunderstorms.

Yet, I can’t help but wonder, as we face that first payment of the first of many college loans, whether we made the right move. After all, this has been our home for less than half of the child-rearing years and it’s quite possible that none of them will ever live here again for any length of time.

But, on the other hand, they all know that this creaky, old house with red countertops will be always be here to welcome them back. And that it was worth every penny.