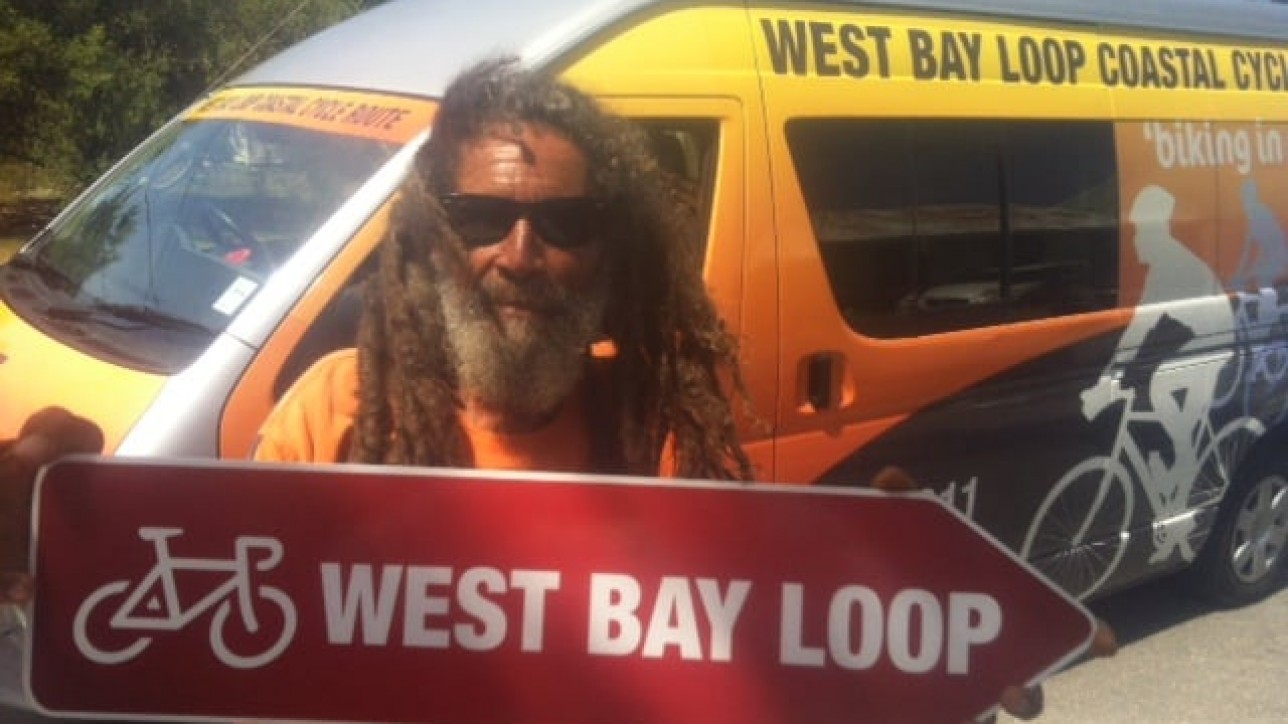 In my next life I want to be Bob Marley. I want to be world-famous, change people’s lives with my words and live a worry-free life.

But then again, if I were Bob Marley, I would have been dead at 36 and would never have met my third child. So, maybe a better choice would be Richard McKee.

I met Richard last summer when Penny (aka Patty) and I went on a cruise that stopped in Grand Cayman. I was in charge of choosing this land excursion after Penny’s pick sent us zip-wiring through the Jamaican jungle the day before. (See Bucket List blog for an up-close and personal.) Knowing that I was doing an 80-mile charity bike ride in September, ever-practical me googled around until I found Richard of West BayLoop Bicycle Rentals. Richard is an avid cyclist, having biked through Europe and the Caribbean and bunches of places that aren’t even on a map. We only knew him for a little more than an hour as he transported us to and from our biking destination. The middle hours were spent exploring the beauty of the island on our own. But it didn’t take long for Richard, with his Irish brogue, gift of gab and proclivity for both historical and trivial facts, to win us over with his free-wheeling spirit. After the best bike ride ever, he dropped us at a bar, leaving us with warm hugs goodbye. A week later, he e-mailed me a hello with a picture of himself costumed in Rastafarian dreds.

I’m a bike rider and I’m special. In my own special way.

On Saturday, my sister Emily, life-long friend Mary Anne and I are joining 6,997 other people in the Bike MS: City to Shore Ride. It’s billed as a 75-mile ride from Cherry Hill to Ocean City, New Jersey, but I discovered in the fine print that it’s actually 80 miles.

I love to travel. I love to meet new people. And I love to do strange and wonderful things. But only if I’m allowed to worry about the minutiae months in advance and create catastrophic scenarios in my mind. That way I can be pleasantly surprised when nothing goes according to plan.

Keeping in character, I have worried about the logistics of our upcoming ride since the day we signed up.

Check-in starts at 5:30 am and anyone who has known me for five minutes knows that I insist on eight hours of sleep. So, do I drive to Cherry Hill in the morning which would mean leaving by 4 am (and going to bed at 8)? Do I sleep at Emily’s house in the Philadelphia suburbs and worry about three bicycles on a bike rack (the last time we tried that, all three went flying off on the West Side Highway)? Or do I stay in a hotel (using my Holiday Inn points) and sleep until 5? After a ping pong tournament in my mind, that’s what won.

When I saw the five-day forecast I stopped worrying about rain (0 percent is pretty good odds) and started worrying about what I was going to wear. If it’s 57 degrees at 5:30 in the morning with a high of 80, is it better to freeze for two hours or broil for six?

I decide to suffer the short sleeve option and pack a sweatshirt for the breezy beach finish line. The MS volunteers will transport a bag for us, but that opens up a whole new worry. If I have to stop at the luggage tent it adds one more line to a long-lined morning. And speaking of lines, since the Port-a-Potty lines will be the longest of all, should I forgo my morning caffeine? But, assuming I will have tossed and turned all night worrying that I’m not going to get my full eight hours sleep, that may not be an option.

Which brings me to the water problem. If I drink too much water I’m going to have to go to the bathroom way too often. But if I don’t drink enough, I’ll get dehydrated and collide with other riders. And the same goes for eating. If I rely on the food at the rest stops, that means I’m going to have to eat granola bars instead of Snickers bars. But if I bring my own snacks, will they fit and / or melt in my bike pouch?

And so I start thinking about everything else I need to carry in my bike pouch. Lip balm. Money. Wipes? Kleenex? Hand sanitizer? Hand cream. Car keys! Spare tire tube. Extra water bottle, just in case? PHONE. And phone charger because my iPhone can’t hold a charge for longer than two hours.

I picture myself at a Wawa in May’s Landing, begging for an outlet so I can charge up and call Mary Anne, having lost them two rest stops back when I insisted they ride ahead while I waited for the bathroom for the fourth time in as many hours.

There’s a shuttle back to Cherry Hill after the fun and festivities in Ocean City. But what if we miss the last bus back? What if we can’t remember in which overflow parking lot we were forced to abandon our cars? What if I’m so tired that I don’t want to drive the 100 miles back home?

Then I worry about things that simply will not happen (I hope). What if I get a toothache? Diarrhea? Bronchitis? What if I get a flat tire? What if Johnson’s on the Boardwalk is out of caramel corn?

As much as I worry, I rarely worry about the big things in life. It’s the little things that bog me down. Lucky for my children, I never worried about them getting stolen or stabbed or swallowed by sharks. I worried that they’d forget their cleats or run out of gas or be late for class. When a crisis strikes, I don’t worry about the outcome, I worry about the details along the way. When I was diagnosed with breast cancer, my biggest worry was how I was going to carry the laundry basket after my surgery.

I don’t know why I have this insatiable need to worry. What I do know is that my worst-case scenarios are other people’s bests. That I’m never, ever going to change. And that in the end, whether I worry or not, every little thing gonna be all right.