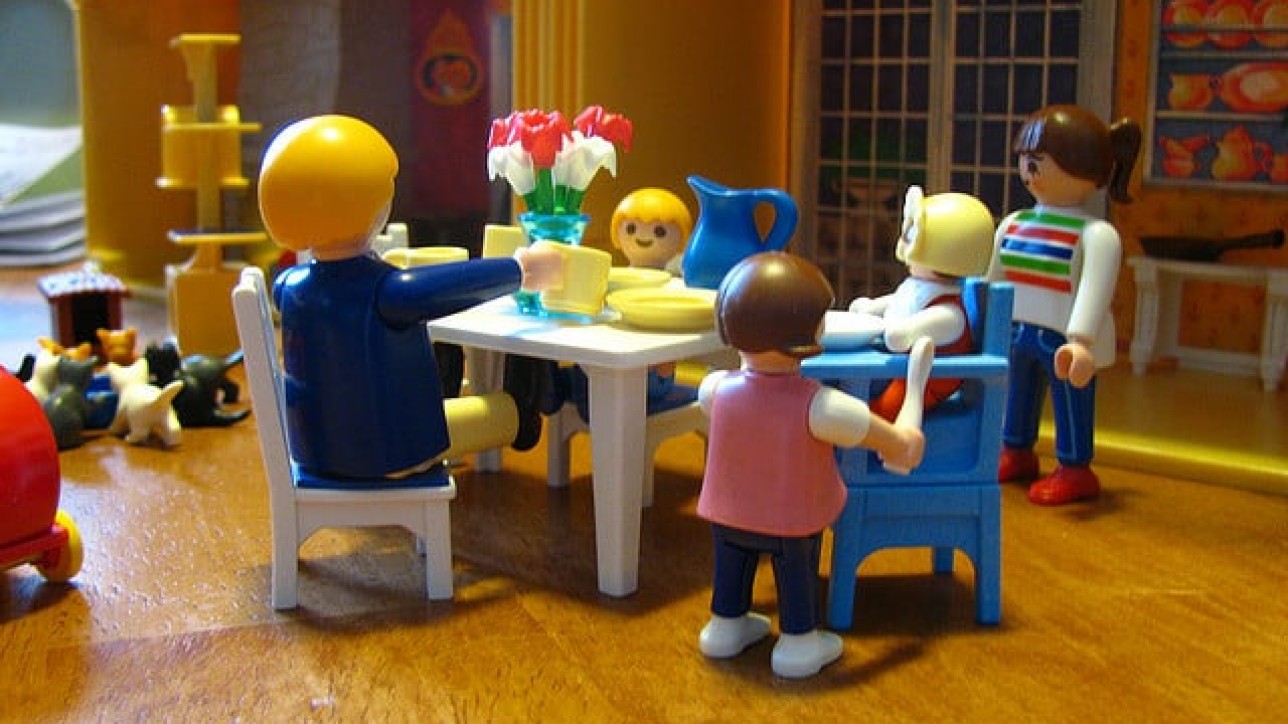 “Grandma, tell me the story again about that thing you used to do,” says the little tike tugging at my apron strings.

“Which story is that, Dear?”

“The one that’s called Family Dinner.”

“Oh, that one!” I say, relieved that the little tike wasn’t asking about that thing I did in college. “Let’s see, it was so long ago, but I think I can remember.”

This is the conversation I imagine having fifteen years from now, along with “tell me again about growing up without a cell phone.”

I grew up with Family Dinner. Every single night we would eat dinner in the dining room with real china, real utensils and real napkins. Dinner was served at 5:30 and there was always a meat, a vegetable and a potato. There was a water pitcher by my father’s seat at the head of the large, oak table. I sat next to my sister Susan because she was the one I was least likely to kick or pinch. When we got older and the late sports bus didn’t drop us off until after 6, our plates would be waiting, warm in the oven. My mother started cooking dinner at 4:30 every night for almost 50 years. You do the math. I can’t count that high.

It all began with a hard-working spouse. I used our deep-seeded love as an excuse to avoid sitting at a table with three toddlers chucking chicken nuggets off their plates. I waited patiently to eat with my spouse, serving chicken divan and chicken stir-fry and chicken parmesan dinners. But, when I took up volunteering and was out several nights a week, I took up eating alone.  I craved my ten minutes alone at the table while the kids watched one more movie before bedtime.

By Tuesday, we were back to take-out on the way home from cheerleading practice.

I know that Family Dinner is right.

I marvel at the mothers who make dinner every night. I admire their skill, their resolve, their courage. I am embarrassed that I don’t do it. So, I have been known to lie about it.

“Oh, we have Family Dinner at least four times a week,” I’d say (knowing the truth was closer to four times a month).

These days, trying to keep our expanding girths in check, both my spouse and I eat salads for dinner. I eat alone at the table sometime before The Voice comes on television at 8, and my spouse eats alone sometime after he gets home from Hot Yoga at 10. I chop his mushrooms and sprinkle his croutons every night. The one kid left eats alone whenever he gets home from baseball. I’ll cook him some pasta or a chicken breast or a hunk of beef. But I always ask him what he wants first. I’m not playing that “I don’t like pork chops” game anymore.

This weekend I was away with my college friends. Somewhere between friending old flames on Facebook and talking about face lifts, the topic of Family Dinner came up. Leslie has four children. She was a single mother for much of her child-rearing years. And yet she made Family Dinner every night. She still has big Sunday suppers for whoever is in town. As she talked about the joy she felt spending time around the table with her kids, I felt the old familiar punches in my gut.

I opened my mouth to lie again. But then I remembered I had never lied to these girls before and I wasn’t going to start now.  Instead, I admitted that I messed up on the Family Dinner thing. But at the same time I realized I could have done a whole lot worse.

My kids didn’t go hungry. They all know how to hold a fork and cut their meat. They have learned to chew with their mouths closed and converse with their minds open. They can put a plate in the microwave as well as the dishwasher. And not one of them has ever asked me why we didn’t have more Family Dinners.

I know when I look back on all the mistakes I’ve made as a mother, I’ll undoubtedly include Family Dinner. And while I may feel sheepish about the 15,000 meals I didn’t make, somehow I think I’ll have better things to regret.