Finding Joy in the Junk of Life 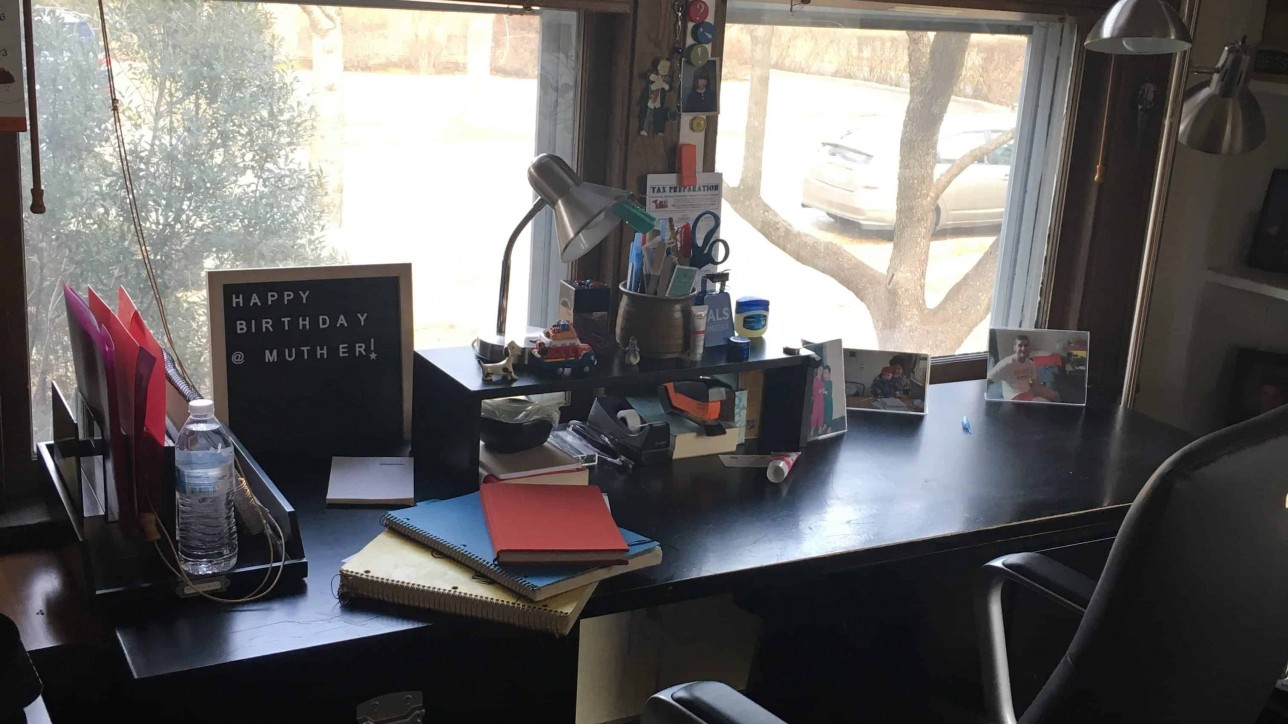 I  have recently KonMari’d my desk. In case you don’t know what that means, believe me, you will. A  woman named Marie Kondo has been entering homes by the zillions and changing lives one Tidying Up episode at a time.

“Keep only what sparks joy,” she says. “Keep only the things that speak to your heart.”

Well, that’s a problem. Because, just about everything speaks to my heart.

For weeks I have been dedicating one hour a day to decluttering my desk. I work in 15-minute intervals, timed with the timer on my new Apple watch; a techno-gadget that sparks complete and utter joy. This desk I am decluttering is the desk from which I work, perched with pen at the front window with a clear view of the Amazon truck delivering consumer essentials to the neighborhood, the dog walker arriving like clockwork for Jesse’s daily stroll, Kerri pulling in and out of the driveway in her electric car, zipping to and from the dance classes she teaches and the woodpecker pecking holes in my beloved dogwood tree.

Despite those simple joys, my desk had also become a growing source of agitation and angst. This is the desk that houses ten thousand memories within its four cavernous drawers. The desk that has overflown into a built-in bookshelf, a make-shift storage ledge and a rolling file cabinet containing scraps of paper with conversations I’ve overheard, snippets for story ideas, crumpled eulogies, birthday cards from people past, personalized poems, radio commercials from CNBC, essays from CafeMom.com and ad copy from energy, travel, semiconductor and liquor distribution companies.

There’s the requisite insurance policies from 2002, tax returns from the turn of the century, instruction manuals from three toaster ovens ago (who doesn’t know how to operate a toaster oven?), paint swatches from our first house (you know, in case I want to replicate the orange basement), work orders from The Grout Man (now extinct or dead), the contractor who may or may not have been responsible for our attic fire the week after we moved into our house and the bills for our fallen backyard fence, Roto-Rooter rip-offs and last 30 oil changes.

The notebooks. Oh, the notebooks. I have notebooks filled with scribbles from baseball bleachers, Project Graduation plans, church meeting doodles, surgery documentations, short stories, middle pages of masterpiece manuscripts, babies’ first words, names and notes of cruise friends so we remember in the morning (Linda & John-Michigan, BFFs, 6 grandchildren and counting; Jamie/Stuart, escaped Mormons; Matthew and Michael, pre-dinner cocktails, cute kid Jacob…); itineraries and tales from Russia in 1985, Paris, 1985 (big travel year), Hong Kong and Manilla, 1986, New Orleans, 1991 and the one I know exists but have not yet unearthed, the Trailways Bus trip across the country in 1979.

And then, we’ve got the diaries.

The first one begins on the first day of my junior year in high school with this dramatic warning scribbled on the front page:

If anyone ever finds this diary, I’d advise you not to read it unless you want to get hurt or upset…If I die, I’d like Emily to read through and decide what should or should not be read by others.

That diary documents many, many of my firsts, lasts and alwayses. It is wrought with emotion and drama and heartache and fun. Always, always fun. I scream for love and acceptance. I search for adventure and the meaning of life. And, I want a boyfriend more than anything else in the world, with the possible exception of becoming Nadine Maher’s best friend.

I write about my never-ending battles with the dearly departed Karen Shea and my ever-entertaining shenanigans with Margaret. I document the “best night of my life” with Patty, Madge, Rachel and Debbie, cutting school for the Flyers’ victory parade, stealing aforementioned Karen Shea’s father’s car, working at Yum Yum, the ice cream store my father bought so his daughters would have a job, Phillies’ games, Ocean City overnights and concerts. So many, many concerts. All written under the umbrella of how everything, everything would be different if only I were thin. (Oh, how warped that teenage self-image!)

My high school diary ends almost two years to the day after it began on the eve of leaving for college:

Well, thanks for listening these years and for watching me go through all that I have. Maybe I’ll write again, but somehow I kind of doubt it.

And then, came the 1984-86 diary. I’ve survived college. I’ve moved into an apartment with my sister, Nancy. I’m half-way through my tenure at TV Guide, a dead-end job I can’t bear to leave because of my fear of change, lack of confidence and the overwhelming notion that I’ll lose my friends if I move on. (All the good ones are still in my life. As a matter of fact, I ended up marrying one of them.)

Therein lie the stories of our massive $55 bar bill on the cruise with Nancy (at those prices, thank goodness they have drink packages now!), Margaret’s wedding, Emily breaking her ankle on the beach at Club Med as she hurried along “trying not to be romantic,” Carrie’s date, Buddy at the engagement party, losing weight, gaining weight and the many visits to DC to see Nancy, Eddie, Reg, Daphne and Tom.

I didn’t yet know that my diary also contained snippets of my future spouse. Our mutual friend, Cherise, had not yet planted the seed, matchmaking us from friendship into marriage. I had no way of knowing what was to come and as “the only” person not in a relationship, with “no hope” of ever finding true love, I resorted to seeking affirmation from an assortment of inappropriate suitors. Don’t worry, Mom. None were anything more than passing thoughts and fancies.

There was Death. The one who sported nine tattoos, in a time when one tattoo was one too many. His bulging left bicep, ever present in his sleeveless undershirt, read Death Before Dishonor. There was Bill Brown, the married bartender at the Fly who every one of us had a crush on at one time or another. Skids, the story of whom I cannot tell bourbon-less, but when I do, suffice it to say it comes with heaving roars from the deepest depths of my belly. Dance Boy who scarred me for life after sidelining me mid-dance at the after-hours club, after stepping on, and possibly breaking, his big toe. And then there was Young who made my heart swoon. A good six years my junior, he’d stare me in the face, seven pony bottles of Rolling Rock lined up in front of him, and tell me how beautiful I was.

There was the guy I thought I really, truly loved who is now in a relationship with a man. The guy I knew for sure was my soul mate who is undoubtedly still searching for that scrap of paper with my phone number on it. And the guy who swore he wasn’t married and later sent me a letter apologizing for lying. At least he kept the scrap of paper.

I just hope that when I’m 60 years old, I wake up and can say going through all this was all worth it, I write, dramatically.

The me I am today was built on the pain and insecurity of that 16 year-old, the hopes and heartbreaks of that 26 year-old and the spunky spirit that carried me through the ups and downs of life.

And so, as joy is sparked as I declutter my desk and relive my adventures diary by diary, photo by photo, letter by letter, I realize I have gotten my younger self’s wish. Every doubt, every dream, every fight, every friend, every sting, every smile was, indeed, worth it.

But, I still wish I were thinner.