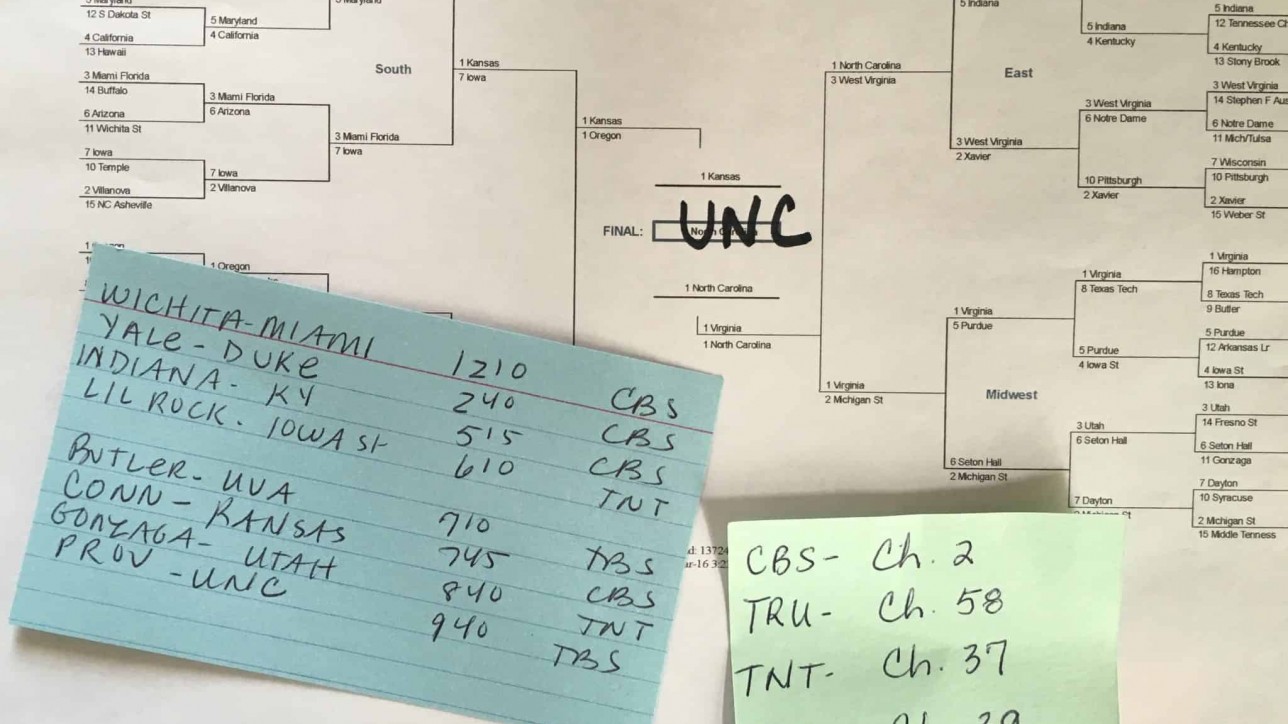 With all due respect to my feminist friends and favorite girl basketball player, Milan Johnson, of course. But it’s true.

I love college basketball more than many boys I know, but I watch it like a girl.

First of all, I sit in a sagging chair in the corner of my living room with a rolled-up pillow tied into a bolster with a bungee cord as a makeshift lumbar support. I watch a 19-inch television screen that sits on a $19 IKEA table with multiple cords and cables snaking across the room. I watch from two-and-a-half feet away, any farther and I wouldn’t be able to see the screen.

I set up with my laptop to do my freelance writing. A pad of paper and three pens because I always walk away with one, to jot down notes of things I’ll forget, like to make a dentist appointment or get the dog a rabies shot. I have my cell phone plugged into the charger and the house phone on the table for easy access when the daughter makes her daily call. I have an endless glass of Diet Coke with plenty of ice and a straw. I usually have a bowl of pretzels by my side for a little fun and crunch to bolster my boring spring mix and spinach lunch salad. And of course, I have my pile of pools and game schedules and master sheets and an index card that tells me which channels (there are four) my favorite teams will be on.

Hands down, my favorite time of year is March Madness. Super Bowls, World Series, Stanley Cups have nothing on the NCAA Tournament. I don’t go to parties or watch with friends. I can do it all alone.

And I did. For twelve hours straight yesterday. I really did. I watched every single one of the sixteen games yesterday. While it’s impossible to watch every single second of every single game because they are multiple games on at a time, I mastered the remote control and flipped from CBS to TBS to TNT to TRU with the precision of a point guard.

For the past ten years I’ve been in a tournament pool that’s organized by a guy I have never met from Lancaster, Pennsylvania. And I spent a lot of time making my picks. I do three pools in my name, one in my blog’s name and one in the dog’s name.

I have to do multiple pools because I have multiple teams I have to root for. I have to pick UConn for Jaelin and Megan, and because the one year I did win the pool was the year the Huskies took the crown. I can’t in good conscience choose Iowa for Daniella over Jamal, Lana and the Forman boys at Temple, so I have to add another pool. I can’t go against St. Joe’s because my son used to play with Shavar at Riverside Church. I circle Oklahoma for Ruby and West Virginia because it’s my alma mater. Or was. Until they lost to Stephen F. Austin. I pick any team that’s up against Duke. I go with UVA because Ty’s going to play there next year and Iona for Tony Hargraves. I cheer for Notre Dame for Brandon and Seton Hall just because they’re Seton Hall. I pick USC over Providence for my son who I wish never gave up the game and of course, Pitt for Chris Jones.

And while I watch, I watch like a girl. I don’t watch how Shavar handles the ball, but instead scan the stands for a glimpse of his dad. I don’t worry that Chris Jones will miss a bucket, but rather that he’ll choke on the gum that he insists on chewing while on the court. I fall prey to the human interest stories, the walk-ons gone good and the bad boys who’ve risen from adversity. I watch the coaches’ wives cry and shake my head at the lumberjack beards. My throat constricts when a middling school like Middle Tennessee takes a final four favorite to task. And I scream out loud when some guy from Northern Iowa sink a half-court buzzer beater for the win.

But no matter how I watch, who I root for, or how many pools I enter, in the end, there’s only one team that matters.

And that’s the one team I won’t watch like a girl. I won’t let my underdog heart feel sorry for Providence because I have to keep it beating for when the Heels take on Indiana, or God forbid, Kentucky. Instead I’ll watch with the same heart thumping passion that will match any guy out there.

We sent our daughter to UNC fully intending to celebrate an NCAA championship or two in the four years she was there. And while it didn’t happen, we never stopped hoping. Because, after all, we’ve invested a lot of money in that school. And I don’t mean the $10 pool.