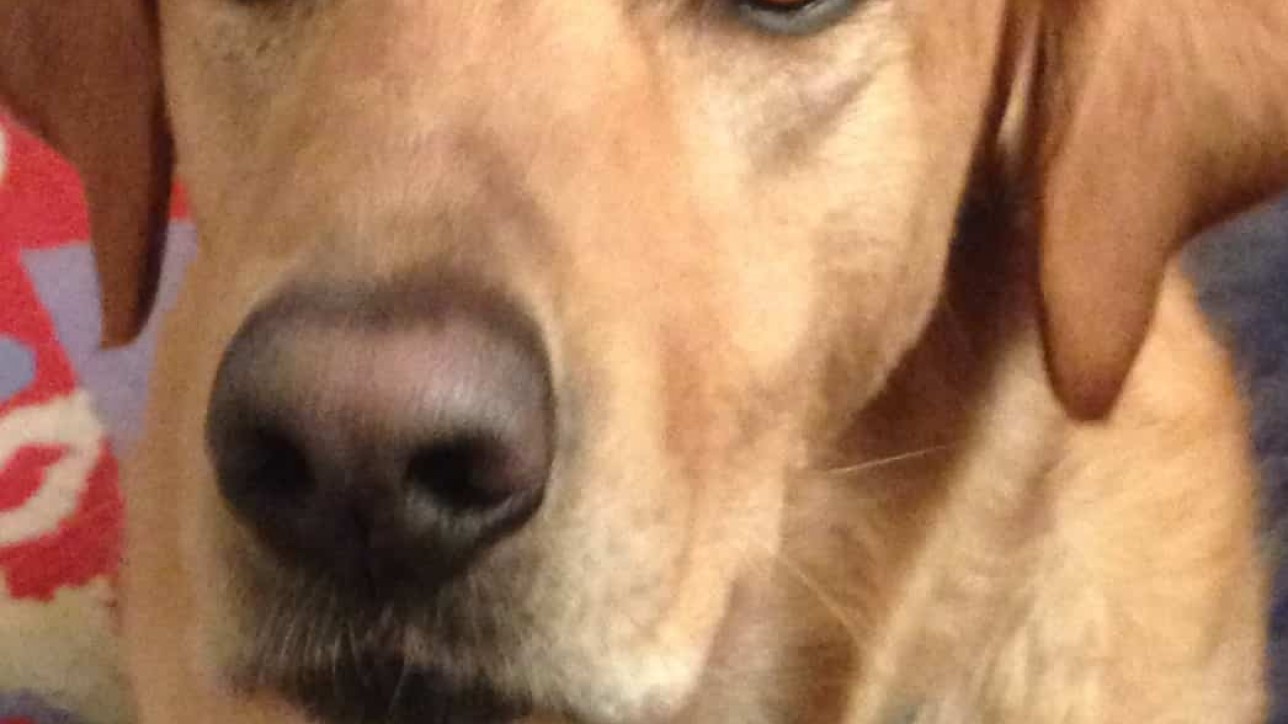 Tuesday was Griffey’s birthday. He turned 28. And he still lives at home.

If the average life of a lab is 12, that means we have roughly 56 more dog years together.

And that is a long, long time.

Griffey was rescued from the streets of Louisiana, or so the story goes. I find it kind of hard to believe because he hates the heat. When the temperature topped out at what ended up being a spring joke of 75 degrees the other day, Griffey was panting in the shade like it was the dog days of August.

We adopted him from a lab rescue place I found on the internet. He was advertised as a medium-energy, young adult dog.  But they make things up.  Like how old and how well trained they are. So we arbitrarily deemed him two years-old, and high, not medium-energy, when we brought him home on Tax Day two years ago.

Chester, our black lab/chow mix had died a few months earlier and my spouse was tired of walking in the woods in the morning with an empty leash. He wanted a new companion. I didn’t want another dog. Number two child was about to go to college and I felt no need to fill the house with more dependent mammals. But because my spouse has never asked for so much as a hot meal in our marriage, and because I bullied him into having three kids, I conceded.

After all, it was a great way for me to acquire material goods. I bought a new cage and bed and collar and leash. I bought chew toys and dog biscuits and 25 pound bags of Iams dog food. My spouse reminded me that I did the same thing for each of our children causing him to wonder whether I was procreating because I wanted to be a mother or because I wanted more equipment. I’m still searching for the answer.

I met Griffey’s foster mother’s boyfriend in a park in central Connecticut. Now, I’m not a scaredy-cat by any means, though later questioned my own judgment in meeting the boyfriend of someone I didn’t know in a park in a town I didn’t know. But, I didn’t get accosted by anything but a big Marmaduke of a dog bounding into me, paws on my chest, tongue on my face.

When I got Griffey home, I realized why they didn’t want us to see him in a home environment. All 70 pounds of him jumped from red leather couch to wood rocking chair to chartreuse recliner that no one but me is allowed to sit in. He scaled the coffee table; he ran circles around the house and cleared the railing on the deck, dropping to all fours, five feet below.

He chased baseballs like his namesake, Ken Griffey, Jr. and acclimated immediately, as if he had lived with us his entire life. He went for his three-mile walks in the morning, nearly dislocating my spouse’s shoulder as he lunged at rabbits and squirrels and other beasts along the trail in the nearby woods.

I started taking him for a night time walk. Our backyard is fenced so I considered it a bonus for both of us. We’d go out at 10 pm because the little white fluffy dog down the block passed by an hour earlier and the pit bull went out an hour later.

But, he started whining at me as early as 8 o’clock. He’d sit an inch away from me and every time I’d get up, he’d jump in circles thinking it was time for the walk.

“Don’t let him bother you. He’s just a dog,” my pragmatic spouse would say when I’d get upset.

But, then again, he was always able to just say no to the kids as well.

In these cold winter months, I have trained him instead to go out in the backyard before bed. He gets a biscuit when he does his business. But now he goes outside three or four times a night, sometimes faking the lifting of his leg, just so he gets his just desserts.

I had to buy new rugs for the living room. We used to have lovely black-bordered rugs that picked up the black accents of our piano. Within an hour, they were covered in yellow dog hair. Our rugs are now tan and hide the hair. I vacuum three times a week and could do it every day, twice a day, but I refuse. I have bought stock in lint rollers for the black yoga pants I wear every day.

Griffey doesn’t go on the furniture anymore. Except for Max’s bed which he believes is his own. We keep a sheet on top of the bed to catch the dog hair and it clogs the laundry room sink every time I wash it. Max’s room has become the overnight guest quarters and Griffey barges right in. He has slept with the likes of my high school friend, Madge; my husband’s ex-girlfriend, Sally; Max’s current girlfriend, Oksana; and our Ugandan friend, Vincent. No one seems to mind.

Griffey barks at raccoons in the backyard. He barks at skunks and has gotten sprayed. Twice. He barks at birds. He barks ferociously at other dogs when he’s walking on a leash. But, he won’t bark at anyone who comes in the house. I hold on to the hope that if someone, who is not one of the kids’ friends looking for a place to rest their spinning head, breaks in, that Griffey will figure out a way to let them know they are not welcome.

Leo leaves for college in a matter of months. I will have a house devoid of dirty cleats. There will be no more toothpaste tubes squeezed in the middle and no more spit on the edges of the sink. The toilet seat will remain down, his room will stay clean. There will be no backpacks, bat bags or sneakers to trip over. I won’t have to cook dinners that sit on the stove for days or drive him two blocks to his friend’s house when his car is in the shop.

But, I will have dog hair to vacuum. For another 56 years.