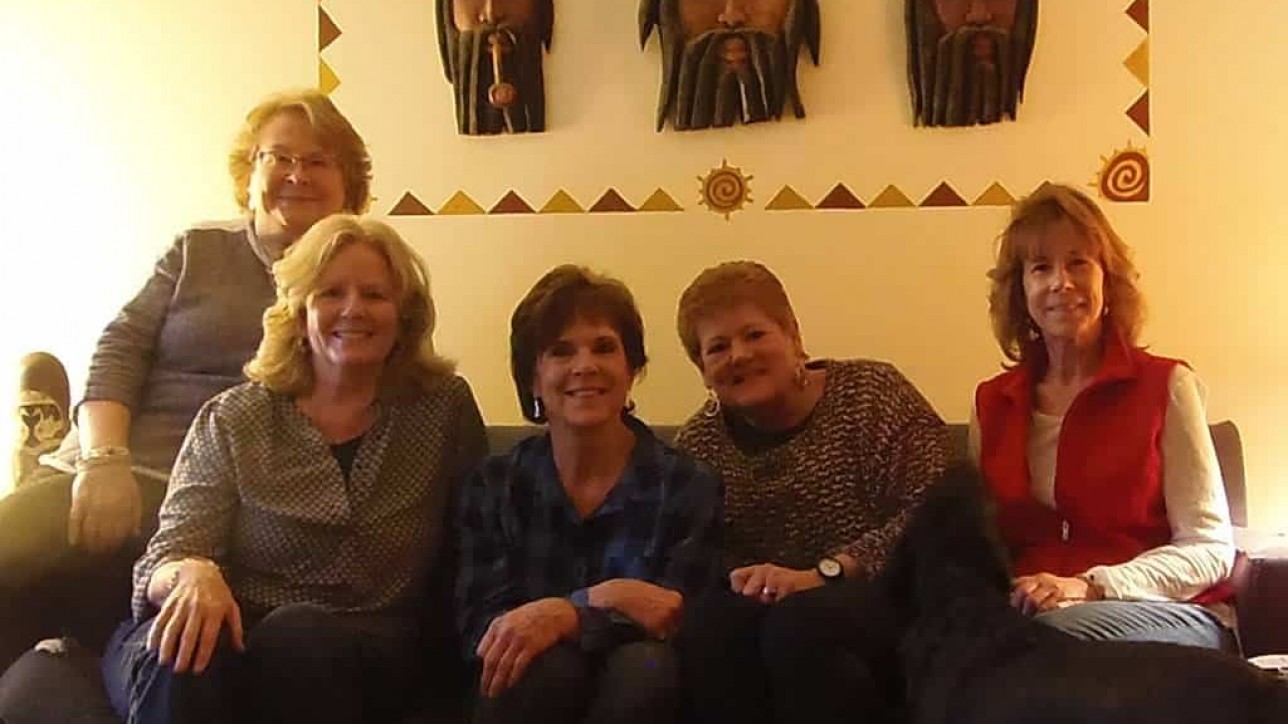 “I’ve got a proposition for you,” said the well-dressed Millennial as he sidled up to the mahogany bar where two middle-aged women sat sipping their Manhattans, one straight-up, the other with an extra cup of ice on the side, 200 miles south of the city for which their cocktails were named.

The one woman subconsciously smoothed her slightly-pilled Annie Sez sweater, tugging it over her spreading hips while the other let out a “this is gonna be good,” chortle.

Meanwhile, their two, once-naturally, blond-haired friends were leaning up against a table on the other side of the room, nursing their respective rum and coke and chardonnay, having neither the desire nor the fortitude to fight for a stool that swiveled into a sea of under 30 year-olds bellying up to the bar.

But of course, one of the swiveling women was me. The other was my friend Ann. Contrary to popular belief, we procured our spot at the bar to help ease our arthritic knees and searing sciatica, not for the easy access to the bartender. Though, admittedly, that was a bonus.

It was the Annual All Girls’ Weekend, something my college friends and I have been doing for a good 40 years. For the first 25, we rotated houses for a 24-hour visit, kicking husbands and kids out for the night, sleeping in twin-sized beds and sharing family bathrooms. But eventually we realized that one day wasn’t enough time to catch up on a year of each others’ lives, so we changed our parameters. Now we meet once or twice a year, renting off-season beach houses or remote mountain retreats during peak leaf-peeping season. Either way, we do it frugally, with three nights away costing me less than what my kids, who no longer live at home, cost me in one day.

We have a pretty simple agenda. We eat. We eat more. We drink. We shop. We hike. We talk. And talk. And talk. And talk. And laugh. We laugh until one of us (who shall remain nameless) pees her pants. We write down our goals for the year which run the gamut from the monotonous lose 10 pounds (or 20, or 30) to getting the dog certified as a therapy pet (no, not me) to venturing out of one’s comfort zone. We review the goals every year, give each other affirmations and love and leave with rejuvenated souls.

We usually go out for dinner once during the weekend and the rest of the time eat dishes we’ve brought from home. We always consume way, way too many calories.

So, there we were last weekend in Dewey Beach, Delaware for the Annual All Girls’ Weekend. Being somewhat of a local, we wrangled a restaurant recommendation out of Leslie’s oldest son who heartily endorsed the Dogfish Head Brewery in downtown Rehoboth.

It was hopping for a Saturday night in February and we were told we’d have to wait an hour for a table. My thinking was, if there were that many people waiting that long to eat, it must be worth it. And I know from many group experiences that by the time we agreed upon and arrived at another place, we would have wasted the hour that we could have spent sipping cocktails with crowds of drunks who looked suspiciously similar to the kids we had just finished raising.

Well into our second drinks, with the band setting up in the corner near Peggy and Jeanne, the handsome Millennial and his well-coiffed date approached us at the bar.

“I’ve got a proposition for you,” he said and we leaned close because our ears aren’t what they used to be, especially with the barroom background noise.

Now something happens when you’re thrown into a room with kids half your age. You either feel grossly out of place or feel like you’re blending right in. Clearly, we were perceived as peers, possible cronies, fun-loving people who this attractive couple would simply die to hang with.

Me, ever-eager to make a friend jumped right up.

“Wait a minute,” she said. “You want to give us your table? There are four of us and only two of you. Your table’s not going to be big enough for us. And besides, we want to sit upstairs.”

The couple hemmed and hawed and I said, “Take our seats, it’s fine.”

Ann looked at me quizzically but followed my lead.

“Yeah, no problem,” I said, certain I’d be Facebook friends with them by the end of the evening.

We got up and joined our aching-boned, middle-aged friends by the table on which they were leaning.

“Are you guys crazy?” Jeanne asked. “You gave them your seats?”

“I guess I figured if they had the nerve to ask us, they deserved them,” I explained. But then I started stewing.

“Would you EVER have asked two old ladies…” I began.

“OK, whatever. Would you ever have asked two ladies who are clearly older than you are if you could have their seats? And furthermore, would you have TAKEN them if they had offered?”

“They probably don’t think we’re as old as we are,” the ever-positive Peggy suggested.

“When did you all graduate from college, like five years ago?” one of the Theta Chi’s slurred.

Our table was called shortly after, ending our fraternizing with the frat boys. But I couldn’t get over the Millennial and his date taking our bar stools. I fussed and I fumed and I declared that they should have at the very least bought us drinks.

I contemplated texting my kids and asking if they would EVER take a grown-up’s bar stool. But then I pictured them shaking their collective heads somewhere out west, down south and across the state, wondering what could have triggered this most recent tirade.

And then I thought about the subsequent Instagram photo that I’d post of the felonious couple with the caption… Would you EVER?

But, for once, I thought before I typed and put my phone away realizing there was a really good chance that one of my favorite Millennial followers would like that little photo and add a comment saying something like, “Hell, yeah!”

And that would simply break my heart.