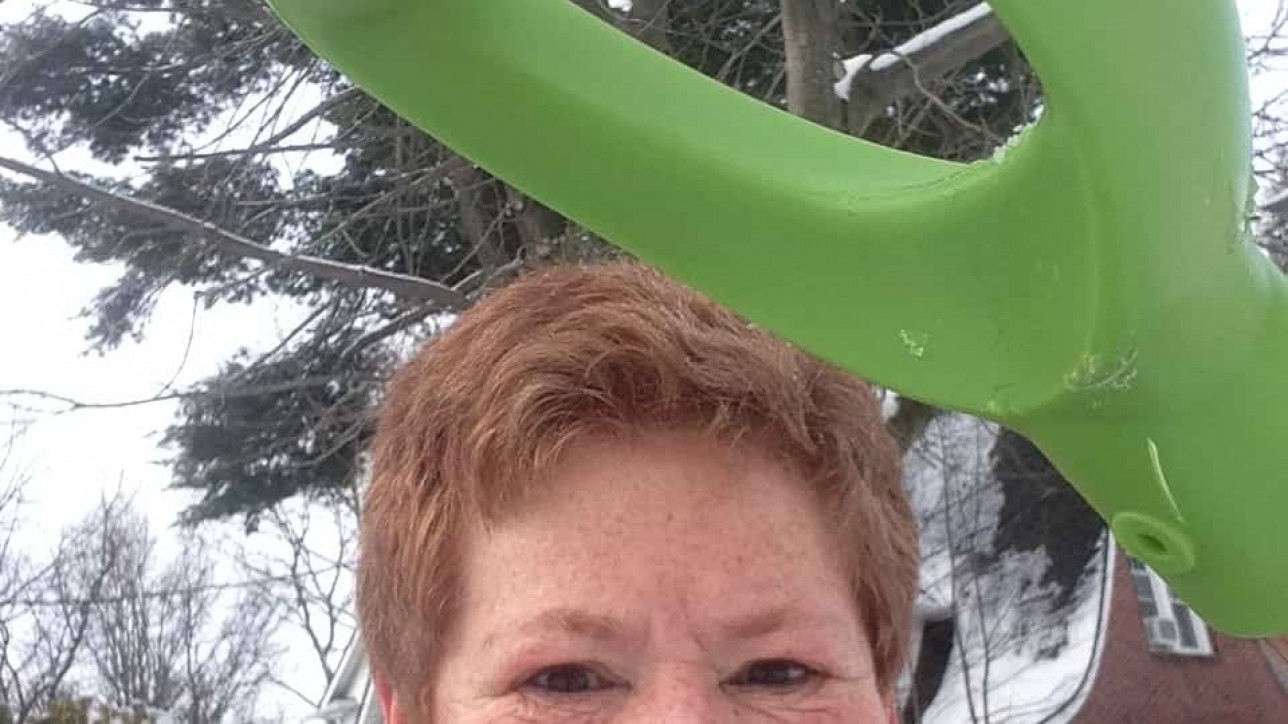 When it comes to shoveling snow, I’m actually glad that all my kids are gone. I no longer have to make excuses for why the old people were always out doing manual labor while there were able-bodied teenagers in the house.

“Oh, Max is still asleep. He was up late last night doing a book report.”

“Leo is recovering from shoulder surgery, he can’t shovel.”

And of course, I never even mentioned Molly because she made it very clear very early on that shoveling was not a job for a girl.

My spouse, being a manly man, loves to shovel snow. Just as he loves to rake leaves. He does it by hand; no snow-blower, no leaf-blower, all he needs is a good, sturdy shovel and he’s good to go.

But, unfortunately, he has a job to which, after a pre-dawn, snow-or-shine walking of his mammal in the woods, he has to travel a fair distance and deal with difficult people. So, a weekday snow storm is not his idea of a good time.

Especially because I have added several houses to his workload.

In our old house, we always shoveled our next door neighbor’s driveway. The Fischers are lovely people, our parents’ age, who always appreciated our efforts. We genuinely liked each other making my spouse happy to cross town a couple of times that first winter after we moved to make sure they were all dug out.

In our new house, we found ourselves next to another neighbor of similar age. And so we started shoveling his walk. And driveway. And front path.  And back steps. And cleaning off his car.

The difference was that this next door neighbor, who I shall call Milt – just in case he has a hidden propensity for reading blogs –never acknowledged, let alone thanked us, for our kind deeds.

But all I had to do was think of my mother who lives alone in Pennsylvania. Her next door neighbors, the Winslows, are the kindest people in the world. They would never, in a million years, let her shovel her own snow. And so, I was just being a Winslow.

And then I got involved with Rose who lived caddy-corner across the street. She was even older and less able than Milt. After witnessing our first random act of kindness, she took to calling three days in advance of a storm to book one of the boys to do her very long driveway. Sidewalk. Front path. Back path. And front steps. But because the aforementioned sons were sleeping or recovering (or neither), I would insist that my spouse shovel her house as well. Otherwise she would call at 8 am, then 9, then 10, wondering why the boys hadn’t been over yet. In the later years, Leo, who to his credit, did shovel a time or two, went over to sell raffle tickets for his travel baseball team. Rose shooed him away, not believing when he told her he was Betsy’s boy.

Then there’s another neighbor who we shall call Sam. Two years ago his 40 year-old son fell ill and he and his wife were back and forth to the hospital every day. Although Sam is wealthy enough to pay for the entire block to be shoveled professionally, in a gesture of neighborliness, we took on his long driveway. Sidewalk. And front path as well.

Sam, unlike the other neighbors is overly thankful. He stops at our back door with bags of goodies after every snow fall. Apple-pie-flavored yogurt, kosher wine (sparkling), pomegranates and pickles.  One day I told Sam about Milt’s thanklessness. Sam must have lit into Milt because now, in the middle of August, Milt will call across the hedges, “Thanks for shoveling the snow!”

Now don’t for a minute think I don’t do my share of shoveling. My spouse may be better than I am at the task, but I have gotten so I look forward to a good snow. If I can milk the shoveling for at least 45 minutes, I can count it as a workout and skip the gym that day.

Which brings us up to today. It was snowing when I went to bed last night so I left my spouse a note asking him to save me a driveway or two.

“Milt’s house is all yours!” was the note he left in response.

Out I went, hours after my spouse had left for work. It was a fairly pleasant snowfall – not too cold, not too deep, not too heavy. I did Milt’s sidewalk. And driveway. And back steps and was just heading up the front steps.

In my way was The New York Times, in its bright blue plastic bag, so I picked it up and flung it to the front door.  However, with one hand on the shovel, my aim was completely off and the paper went over the edge of the stairs and five feet down, behind the bushes next to the house.

Now, there was no sign of Milt at all. As a matter of fact, his car was not in the driveway and there were no tire tracks. I wondered if he had gone off to Florida, or perhaps he had just stayed with his lady friend overnight. I could so easily leave that newspaper behind the bushes, beside the house, for the landscapers to find come spring.

But then I realized that wasn’t very Winslowish of me, and so reached over the railing and was able to wiggle the paper onto the shovel. As I lifted the shovel, the paper went sliding off, farther away, deeper into the bushes.

I looked around, I really did, to see if anyone was watching me. No one was. And so I simply finished shoveling the path and headed home. But after a few steps, I turned back. I laid myself across the cold, wet, snowy railing and leaned precariously over, dangling the shovel deep down into the brush.

I rescued the newspaper without breaking a bone. I got a nice workout in. I felt good about doing a good deed.

Yet, I can’t help but wonder, how much more snow do we have to shovel? 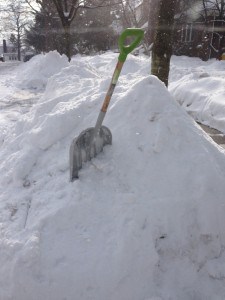