Spinning Out of Control 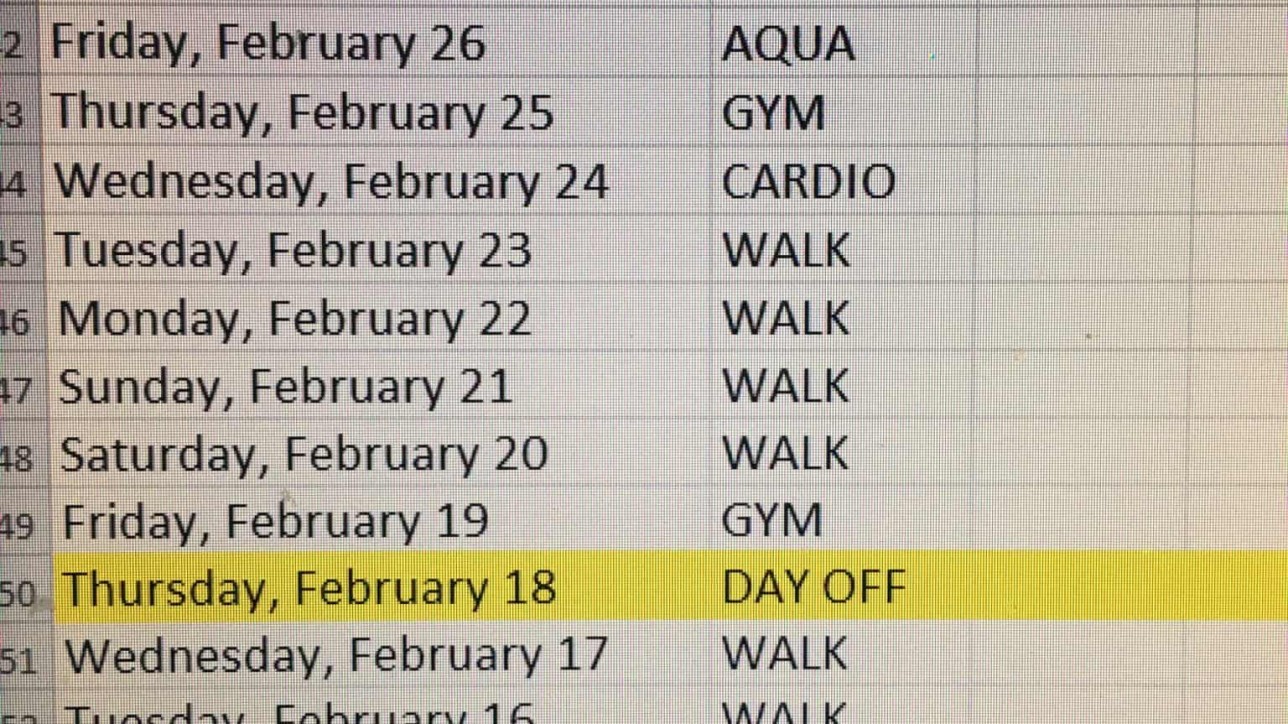 Sometimes I do things just so I can say I did them. I’m not talking about bucket list type things like cliff diving at Ka Lae or parachuting from a plane or climbing the Eiffel Tower step by step.  Though if I did any of those things, I’m fairly confident the whole world would know. I’m referring to the mundane things I do as I meander through life that no one, with the possible exception of my sister Emily, cares about. And yet, I insist on droning on and on about my accomplishments, obsessions and foolhardiness.

For instance, many people know that I worked at TV Guide Magazine for over nine years and never called in sick. Not once. Not even when I had pneumonia.

And what exactly did that do for me? Nothing. No thank you. No promotion. No Perfect Attendance pin. But, I’ve been able to slip it into conversations with my children whenever they threaten to miss work. Or school. Or practice.

And what exactly does that do for me? Nothing. An eye roll. A slammed door. A “Well, I’m not you, now am I?” smirk.

And, just so I can talk about it, I have an Excel spread sheet on which I have recorded my workout regime every single day since February of 2011. That’s five years. In five years I have never missed two consecutive days of exercise. I have never taken more than three days off in a month. And I often will go six weeks straight exercising Every. Single. Day.

And what exactly has that done for me? Well, I’m still not skinny. My bone-on-bone knees still throb. My arthritic back still aches. But, hey. I’m fit.

I have a whole conglomeration of workouts that make their way into my life and subsequently, onto my computer. I walk. A lot. I have different routes I take around town. Once a week I walk with my friend Grace at the park. Or we go round and round at the mall if it’s raining. Sometimes I change things up and do the old lady shuffle where I replicate the motions of jogging without actually pounding the pavement.

I joined a gym with a pool and started swimming laps until I got waterlogged and switched over to Aqua Fit classes, where I feel young and limber and energetic.  I lift weights and glide on the elliptical machine. I tread on the treadmill and simulate hills on Level 10. I row, I climb, I throw weighted balls at sideways trampolines. I’ve taken Zumba class. I even had a personal trainer until our personal rapport got in the way of my crunches. I’ll do just about anything my limbs will allow, except of course for yoga. Because God forbid, I do anything to calm my muddled mind.

But, I’m bored. I’m weary of walking in circles. I’m tired of doing jumping jacks in the water. I’m sick of free weights and kettle balls. It’s time for something new.

My friend Theresa was a master Spinner in her heydey. She used to rave about her Spin classes and how fit she got and how many friends she made. I’ve been tempted, but really, I’d rather ride a real bike. In the warm weather I routinely pedal 20 or 30 miles at a pop. I’ve ridden upwards of 80 miles in a day and wondered just how taxing riding a stationary bicycle could possibly be. I mean, I’m in pretty good bike shape for my age and ailments.

I slinked into the back row of the Spin studio ten minutes early. I watched the toned and tanned 30-somethings in front of me adjust their seats, secure their filtered water bottles and clip their SPIN SHOES into the pedals. I scoffed at my Nikes in shame. I raised my seat, mounted my bike and spun the creaks out of my knees, waiting for class to begin.

In came Andy. Short, stocky, donned in bicycling shorts, touring jersey and wireless head mic. After some perfunctory instruction for a class that clearly didn’t need it, he turned off the lights, turned up the music, hopped on his bike and we were off.

“Move that little red lever! Gear up! Put it in fourteen. Not six. Not ten. Fourteen. Let’s go! Keep the RPMs between 80 and 90. Sprint!”

And I did. It was easy. For about seven seconds.

I looked slyly to my left and pulled my little red lever down to five.

I vowed to stay for 30 minutes. And if Andy called me out as I tried to skulk out of class, I’d just chirp back that I had a cardiologist appointment.

The class rose in solidarity and start pedaling standing up.

Nothing to it. For about 12 seconds.

You talking to me?

I hoisted myself back up.

The big clock on the wall ticked oh, so slowly. Twenty-nine minutes down. I decided to hang in for another 10.

Are you kidding me?

I flipped the little red lever up to twelve. For ten seconds. Then dropped it down to eight. Then five.

The torture went on and on and on. Up and down. Gear up. Up. Up! Faster. Faster. Faster! And, recover. For a nano-second. Then Up! Eighteen! Position three! Which I gathered had something to do with hand-on-handlebar position. Position two! 100 RPMs. Let’s go! It’s called exercise for a reason! Boom. Boom. Boom. Music booming to the tune of my beating heart. Sweat flinging. Palms stinging. Legs aching. Back breaking.

And yet, I toughed it out, way too embarrassed to get off and go. So I just kept pedaling. And pedaling. And standing up. And sitting down. Until I made it through the full hour of spin class.

The first thing I did when I got home was add SPIN to my Excel sheet, knowing full well I’d never, ever do anything that strenuous ever again. But then, just for laughs, I went on Amazon and searched for Spin shoes. I really did.

And if not, at least I’ve kept myself entertained in the process.