Tangled Up With Sophie 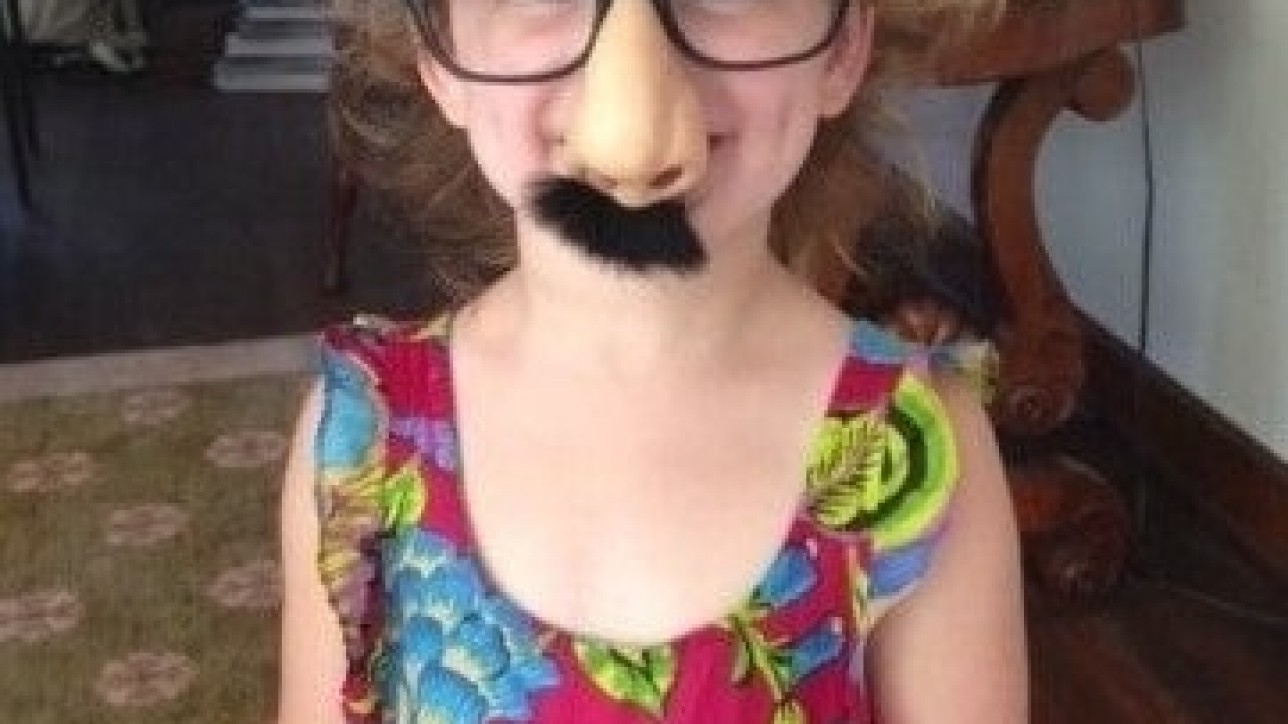 “You’re the evil mother,” Sophie said, pointing to me.

“How did you know?” I wondered aloud.

She looked at me quizzically and gave my sister Emily the role of the good mother.

“You are the Floating Lights Guy,” she said to her father. “And I’m Rapunzel.”

Sophie, Harley and Emily had all recently seen Tangled. I had not. The last Disney movie I saw was The Lion King. It was my first-born’s first trip to the movie theater and I thought I wanted to be a part of that milestone. From that day forward my ever-loving spouse was on movie duty. He actually enjoyed spending time with the children. Plus, he thought the animation was quite clever.

Last weekend I went to Pennsylvania to have dinner with my favorite nephew, Harley, and my favorite grand-niece, Sophie, who were crashing temporarily at the house of my favorite sister, Emily.

When I arrived, Harley was inside trying to get three-and-a-half year-old Sophie to snooze.

“We had a big day,” Emily explained. “First we went to the church fair and then to the pool.”

We sat outside on the flagstone patio and I launched into one of my long-winded stories that encompassed many weeks, many characters and many convoluted plot twists . I barely nodded when Harley appeared, so intent was I to finish my story before the attention would all be on Sophie.

I finished the story, a tale too complicated to even be blogged about and Sophie emerged, cranky and clingy.

“Oh, please,” I said, thinking of my teenaged self, prone on my friend Mary Anne’s macadam driveway, adding aluminum foil for a little more reflection, all in hopes of tanning my very pale and freckled skin. It wasn’t until I was a good 40 years-old that I started getting tan at all. I had finally burned off the first layer of skin, leaving the tan-able epidermis. Back when it mattered, I burned like a lobster and blistered like a marathoner.

“Maybe she’s hungry,” Emily suggested as Sophie burrowed her nose into her father’s neck and complained of a stomach ache.

“I hope she’s not getting sick,” Harley countered, touching his lips to her forehead to check for a fever.

I refrained from saying, “Sophie, I came so far to see you. Aren’t you going to play with me?”

I didn’t poke her or tease her. I left her alone.

And sure enough, a few Ritz crackers and a glass of milk with a fun-colored straw later, Sophie was up and running.

Off we went to the Lucky Well in Ambler where we grown-ups pigged out on pulled pork and ribs while Sophie, far less gluttonous, had to be urged to take “one more bite” of her chicken fingers and crispy apple slices.

After dinner we hit Rita’s for water ice. Sophie had mango. I didn’t know what a mango was until I was fifty. And I know none of my kids ever tasted it while living under my roof. I had an ice cream cone. Chocolate. Of course. 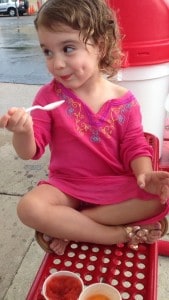 We sat in a little park next to a church right on the main drag to eat our treats. Sophie declared that the wall we were perched upon was too dirty so we had to move to a wrought iron bench.

I didn’t complain about my aching knees.

And I never once told her not to spill her water ice.

But still, I was cast in the role of the Evil Mother in the movie I had never seen.

Kids are very perceptive creatures. As my children can certainly attest, I oozed evil. I didn’t need any tips from Walt Disney.

My kids never had a popsicle, ever, in my house. They were forbidden cones at Dairy Queen and only allowed mini Blizzards with lids. They never knew there was such a thing as purple grape juice. They thought it was always white. They were double-bibbed until they went to middle school. They couldn’t run around barefoot or swim in their skivvies. They had strict bedtimes and stricter wake-up hours. They knew to go to their father for breakfast. Their Evil Mother didn’t go on duty until 9.

I worried constantly about what people thought of me. I felt judged every minute of every day. Were my kids smart enough? Clean enough? Pleasant enough? I felt every cringe and every rolled eye from every eyewitness of every random tantrum. And I yelled. All. The. Time.

“How can anyone yell at a kid?” my son Leo commented this summer, after witnessing a mother flipping out on her offspring. I’m sure I made a comment like “I would have beaten that kid silly,” knowing that I wouldn’t have (see my dissertation on beating my children.).

“Little kids aren’t even humans yet,” he reasoned. I looked at him out of the corner of my eye and wondered if maybe, hopefully, he had forgotten all the times I yelled at him, expecting him to be a human way before he was old enough.

I tried not to yell in public, but boy did I yell at home. When we were in public there were just a lot of empty threats through gritted teeth.

“If you don’t talk to your relatives at Thanksgiving dinner, I’m taking away your iPhone.”

That was last year.

I really had no excuse. By the time I reproduced I had traveled, worked and played to my heart’s content. I was ready for a family and my kids had a father who was more hands-on than I was. My children were planned and evenly spaced. I worked part time when they were born and later, worked from home. And still, it wasn’t easy.

Harley is a 23 year-old with a three-and-a-half year-old daughter. He spends every other weekend and every Wednesday night solo with Sophie. He didn’t plan to be a father and had a whole lot of other things he thought he’d be doing in his twenties. But he is the most patient parent I know. He is fun and funny and does something I had a lot of trouble doing. He always puts his child first.

And, I guess that’s why he gets to play the fun and handsome leading man, Flynn Rider. Or, as Sophie calls him, the Floating Lights Guy. I googled the character, I really did, to find out what kind of guy she thinks her father is.

“Flynn Rider is an adventurer. A risk-taker. An explorer. He has so many overwhelmingly amazing qualities that we can’t even begin to list them all.”

And, I also learned that he was “blackmailed” by Rapunzel into taking her to see the kingdom’s floating lights for her eighteenth birthday.

That’s when I laughed my Evil Mother laugh. Because Harley has no idea the extent of the blackmail he’s going to have to endure with that sweet, smiling little girl of his. 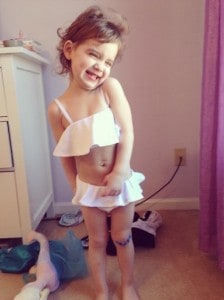