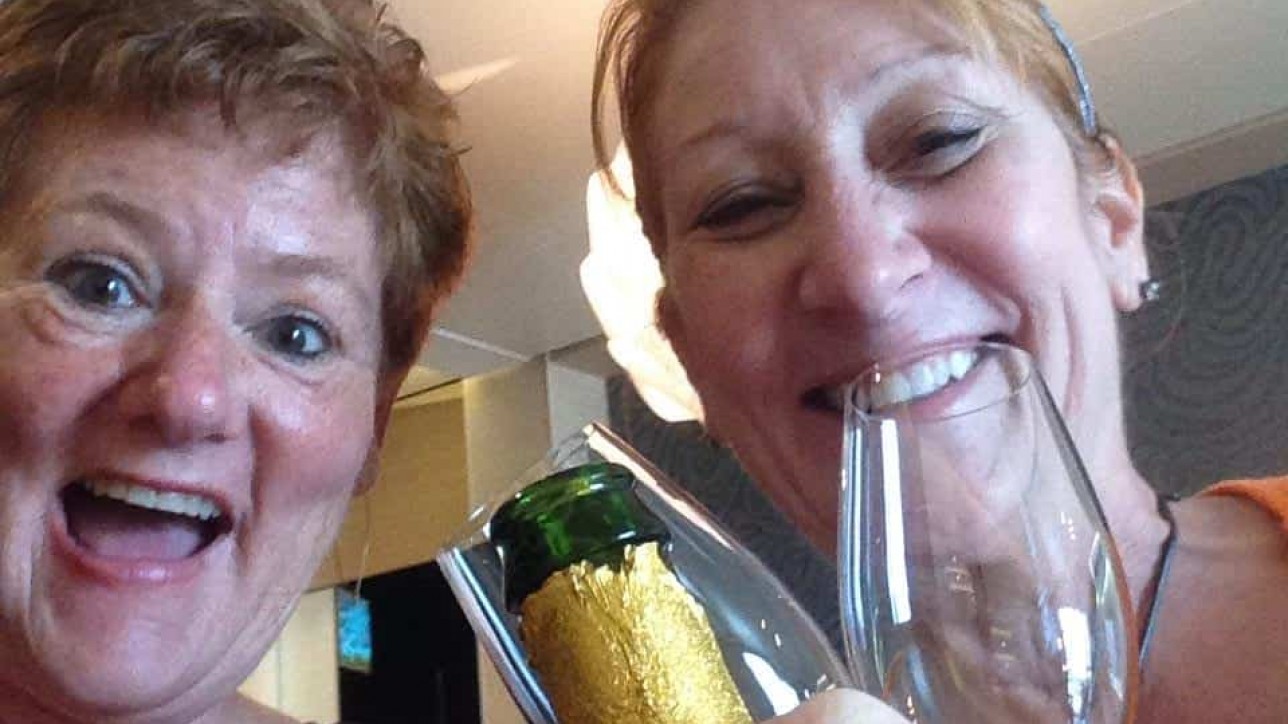 I promised Penny (aka Patty) that I’d find her a husband if she’d only bite the bullet and book another vacation.

I really thought we were in this cruise-or-two-a-year thing for life, but she was balking (some nonsense about work and money and leaving her dog, three things that would never, ever deter me from doing anything). Once she conceded, I convinced her that she’d be more likely to find love on a Norwegian Cruise Line jaunt to Bermuda than on a third-consecutive trip to the Caribbean on Carnival Cruise lines.

It all began forty-some years ago when Penny showed up at Springfield High School, as a short-skirted, exotic-looking, adventure-seeking Catholic School transfer. Despite my jock-loving, Lacoste-wearing, country club WASP-ishness, we successfully wove our way into each others’ worlds.

After college we were inseparable, sharing season tickets to the Phillies, tiny staterooms on massive cruise ships and lopsided bar stools at the local Fireside Inn. Penny tried her best to guide me in the ways of love, encouraging a little more cleavage, a little more liquor and a lot less rules. And then, still nowhere near married, she up and left for Florida leaving me floundering behind while she became a reputable member of society.

Penny is the most creative person I know. She is smart and stylish and pretty and personable. Sadly, she got saddled with a not-so-smart or stylish or pretty or personable spouse. But we eventually got rid of him so we could become traveling companions again.

We had absolutely no trouble meeting men aboard the Love Boat last week.

The first handsome gent we met was Ken. He was a seasoned cruiser who split his time between Long Island and Charlotte and shared our common interest in baseball – with his wife Betty. Betty also was fun and friendly and it was immediately clear that theirs was an impenetrable marriage.

Next came Dave. We met him up on the top deck as we passed the Statue of Liberty, pulling out of New York Harbor. He engaged us in conversation but had no interest in a real engagement. He was on the ship on a casino scholarship along with his lady friend (another Patty), who got to zip around in a motor-coach since she was recovering from back surgery.

Will from New Rochelle was a nice guy. But then again, so was his wife Michele. And their two daughters were way too cute to contend with.

After announcing to our room steward that we needed to find Penny a husband, and preferably not a crew member, we took to our beds, exhausted from day one of our search.

The next morning, we spotted the perfect companion. His name was Steve and he was handsome, fit, tan and a retired NYC police captain. He even sent a private investigator over to our lounge chairs to find out what our story was.

“Are they married? Where are their husbands? You mean the one who is married is allowed to travel without her husband?”

Sadly, the private investigator was his adorable wife of 31 years. Steve and Mel became our very favorite friends. So, that nipped that romance in the bud.

We met Zeke (aka Michael) as we boarded a Rum Swizzle Harbor Cruise while in port in Bermuda. He had a kind face, a nice mustache and listened to us when we talked. He was on his first cruise. With Julie. Who was not only pretty and blond, but befriendable. They were staying in one of those fancy rooms with floor-to-ceiling windows that oozed champagne and chocolate-covered strawberry romance. We weren’t going to get too far with that.

Jim was perfect. He was a lawyer from New York who had no trouble keeping up with our banter. And banter we did. We bantered back and forth until he mentioned the word “girlfriend” more times than we could count. I assured him that he could dump said girlfriend for Penny, but when she showed up at the bar, young, pretty and glowering, we knew we it wasn’t going to happen.

And then we met Chinless. But first we met Toothless.

Toothless had one long tooth. Just one. He wore a John Deere baseball cap and announced that he could never, ever go on a cruise without his old lady by his side. She was his anchor, his compass, the one who told him what to do and when to do it.

“Have another drink, Hon.”

Chinless was a good-looking guy, but for the lack of a strong jaw bone. He drank Bud Light’s in blue aluminum bottles and unleashed his sordid story with pride. He had multiple children and had multiple affairs. He spoke of his multi-million dollar businesses, offering Penny some priceless advice.

“You want a guy? Wear a ring. I would never go for a woman without a wedding ring. Ringless screams, ‘I’m desperate!'”

And so, Penny became Ringless and he was dubbed Chinless.

While docked in Bermuda, we visited the town of Hamilton for an authentic Dark & Stormy (or three) at a pub called the Pickled Onion. While Penny befriended a pink-shorted lad to her left, I pounced upon the cutest boy I’d ever seen (except of course for my own ever-loving spouse).

When he told me he was twenty-three years-old, I immediately tossed Penny to the curb and started looking out for my own best interests.

“Would you marry my daughter?” I asked, in all sincerity.

He agreed. And I swooned when he messaged her with the proposal.

I know it’s going to work out. Even though he lives in a different country.

Well, Penny didn’t meet the love of her life, nor did she meet her next ex-husband. But I have no doubt that she will one day find love again. And when she does, I plan to be there to make sure it’s someone who is as accepting of me as he is of our vacations without him.