What a Difference a Year Makes 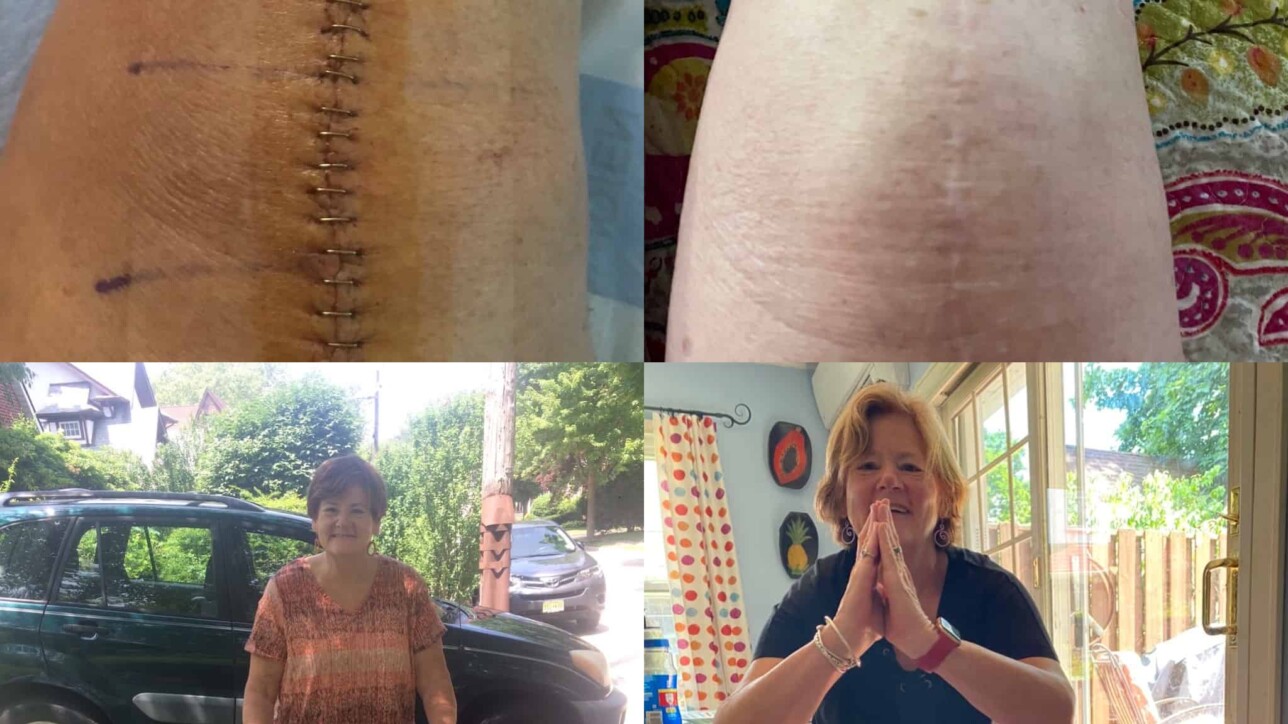 “We can get you in the last week of June,” my smiling orthopedist’s happy assistant announced.

“That soon?” I lamented.

“That soon,” she confirmed.

But if I get both of my knees replaced the last week of June, I can’t work on the food truck in Vermont and Carrie will never forgive me (she did). But, if I get my knees replaced, I won’t be able to drive, exercise, cook, clean, vacuum up dog hair, socialize in the manner to which I am accustomed. But if…

If I’ve learned anything in the past year, it’s that life is filled with But ifs… and There’s No Ways…  and that most obstacles are temporary and, in my case, often the product of overactive and misfired mind games.

The pain in my knees had gotten so bad that I basically crawled up the stairs to Ann’s yoga attic, grimacing through a series of downward dogs, praying for the end when she buffered my knees with a bolster for shavasana. I was the limping lady escorted to one of the coveted chairs in Gail’s living room when I stopped in for a Shiva call. I was the one dragging my sorry self around Overpeck Park with Grace, oh so proud if I could hit 5,000 steps on my Apple watch. I dreaded grocery shopping, getting out of a chair when anyone was watching, or even when they weren’t, and navigating CitiField.

I opted to fight New York City traffic, pre-securing parking in steep-less ramped garages, as taking the bus from my corner would mean hobbling my way down the Port Authority stairs. I made exertion vs pain calculations in my head when planning my day, sometimes grossly overestimating my capacity. Like thinking I’d be able to manage an afternoon of trying on dresses for a wedding. Or imagining I’d have no problem hiking a wooded trail with quite modest hills. Or being able to endure two-inch leg room at To Kill a Mockingbird. And, of course, I ordered everything online, from aforementioned toilet paper to Hershey’s kisses to huge bags of food for the aging canine, all to avoid a trip to the store.

I lumbered through life with the utmost certainty that I was more comfortable with my known discomfort than that of the unknown. I wasn’t the least bit afraid of the post-surgical pain of a double knee replacement; that I could handle. I was petrified of the post-surgical agony known as inconvenience.

Spoiler alert. I did.

I flushed the opioids after two weeks, and to celebrate, picked up the vacuum and resumed laundry duties. I danced at Michael and Kristen’s wedding at week three and drove the following day. At five-and-a-half weeks I was taking two mile-long walks a day and drove to Pennsylvania for my sister’s birthday barbeque at the Schaeffer’s. At six weeks I got on my bicycle and pedaled around the block, and at nine weeks, rode 19-and-a-half miles. I did my physical therapy with Brittany three times a week, religiously for three months.

And, for 31 nights, after disposing of sleep aids and painkillers, I laid flat on my back with those dang immobilizers, not dozing for a single second. People told me to just ditch the braces, that their doctors didn’t even prescribe them. My doctor even told me I could ditch them two weeks early. But, I didn’t. I was a rule follower. All night long I played Words with Friends, read books on my kindle and watched the clock tick slowly and surely toward 6:00 am. Then I’d rip off the braces, run, well, wobble, to the bathroom, and then snooze in the La-Z-Boy recliner for four hours straight.

I didn’t cheat a single day. But, you better believe I threw the braces in the trash can on the morning after the night that marked six weeks post-surgery.

And, that was the end of that.

When I got off my bicycle today after a 28-mile ride through North Jersey, I thought about how far I’ve come in a year. Every day I walk at least five miles or ride at least 20. I look forward to my outings at the grocery store. I’d kill to go to a Mets game. Or a Broadway show. Or take the bus into the city for dinner with the daughter.

So, here we are, a year later. In March, while on the last great cruise of 2020, the world shut down. Talk around the cocktail table turned to Coronavirus. Some pronounced that they would voluntarily quarantine for two weeks after getting off the ship. Some were awaiting permission from their employers to return to the office after taking the cruise gamble. My ever-loving spouse suggested staying in Florida for a couple weeks just to make sure I hadn’t picked Covid up on board.

Quarantining at Patty’s house in Florida sounded pretty great to me.

But, as we walked the gangplank back into civilization, the texts started rolling in. My town of Teaneck had become an epicenter of the pandemic. Friends were in the hospital. Friends were on ventilators. Friends were working their jobs as doctors and nurses and educators and other essential workers, all doing their best just to stay one step ahead of what we were heading into.

I was able to change my flight home for free and nabbed a first-class seat for 50 bucks. At that point, I knew life as we knew it was over.

Despite the fear and chaos around us, once my spouse and kid stopped disinfecting everything I touched, we settled into a nice little routine. We saw more of each other than we have in decades, and I thought, hey, I can do this for a week or two.

And, here we are. Almost four months later. If we’d been told way back when, that we’d be doing this for 16 weeks and counting, I would have been the one leading the chanters through different versions of “There’s No Way.”

But, guess what? We did it. At least the lucky ones did. And we keep on plowing through, day by day. Walking our miles, zooming our friends, virtually book-clubbing, masking appropriately, eating our take-out from our favorite local restaurants, playing our Boggle, doing our jigsaw puzzles, posting our memes, eating our chocolate, and hoping that a year from now we will look back, barely being able to recall the pain.